You know nothing. Meet the real John Snow.

Forget the mother of dragons. This is the father of epidemiology. 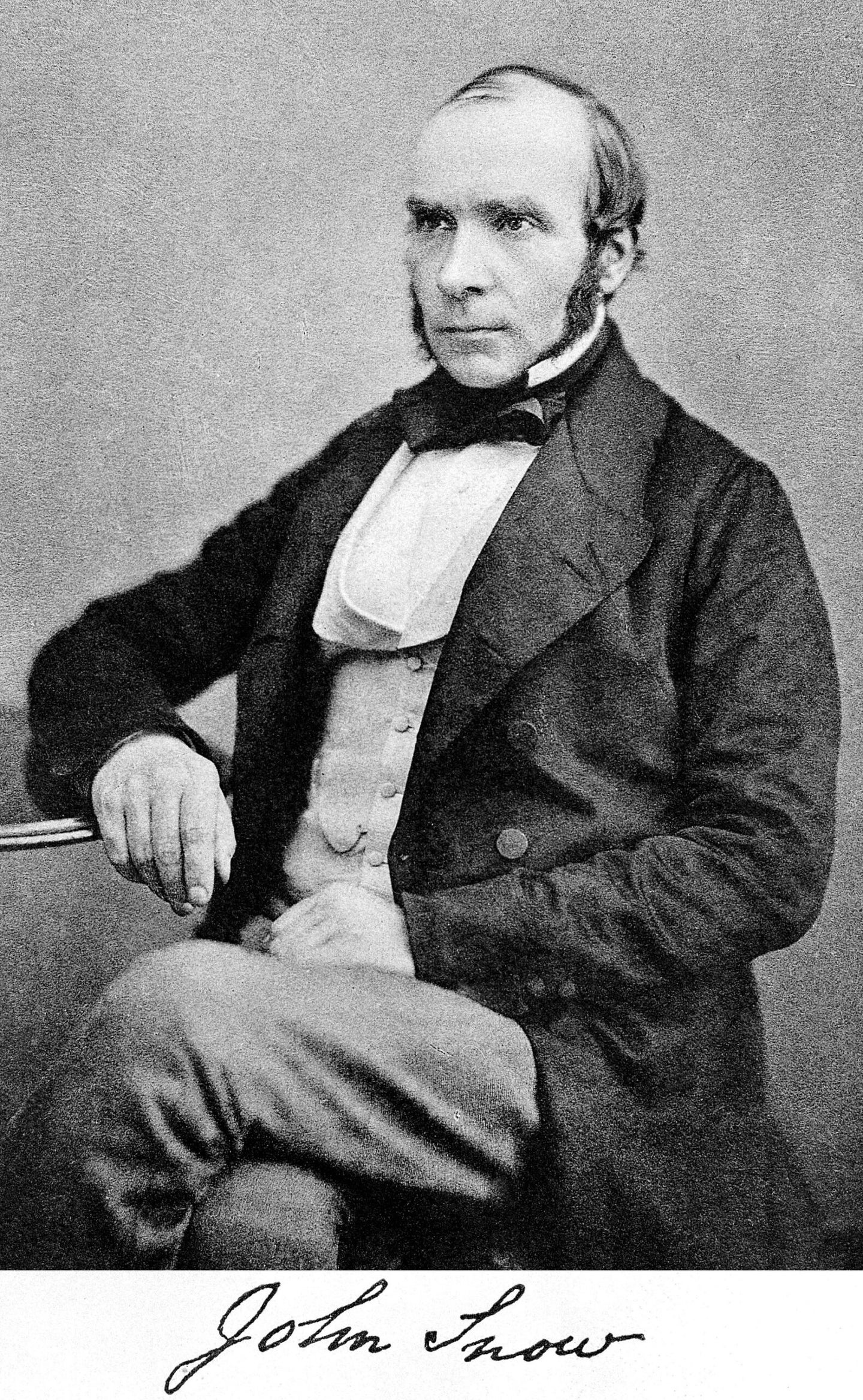 The man, the myth, the legend. Wikimedia Commons
SHARE

Game of Thrones‘ Jon Snow may know nothing, but the real-life John Snow knew a heck of a lot. In fact, the 19th century Snow helped found the entire field of epidemiology.

When Snow was practicing medicine in London, the germ theory of disease wasn’t fully accepted. Physicians and biologists had suggested at various points throughout the 16th, 17th, and18th centuries that many illnesses might be caused by tiny organisms—they often called these animalcules—but most people we’re buying it.

Miasma theory was much more popular. The idea was that “bad air” caused disease, and it wasn’t as crazy as it sounds today. After all, plenty of people got sick from being around dead bodies, sewage, or other sick people. Air pollution does cause about 7 million people to die prematurely each year, though admittedly not in the way physicians of the era thought. Miasma theory held that bad air was a different type of air entirely. And there certainly are diseases that spread through the air. While we know today that it’s only through airborne viruses or bacteria that the air can make you sick, at the time even the most preeminent doctors believed it was the air itself that was the problem.

That meant when epidemics of diseases like cholera struck, the general response was simply to run away from anyone and anything that appeared to be infected. Cholera is an incredibly infectious disease, albeit only through the fecal-oral route, not person-to-person. When it struck London from 1853 to 1854, it was deadly for many. The most severe form of the disease is deadly, mostly due to the dehydration resulting from copious vomiting and diarrhea.

Snow was already a well-known physician for his work on anesthesia—he anesthetized Queen Victoria for one of her births—and a firm believer in germ theory. And in 1852 he got the perfect chance to study germs, or, more accurately, bacteria, in action.

London’s water back then was dirty, often taken from parts of the Thames within the city limits where it was full of pollutants like sewage and industrial runoff. But in 1852, one of the major water suppliers, the Lambeth Company, moved their source upriver to a much cleaner spot. Another supplier in a similar area, the Southwark and Vauxhall Company, kept its inlet in a polluted part of the Thames.

Snow realized this presented a natural experiment, which he wrote about in an 1855 paper: “No fewer than three hundred thousand people of both sexes, of every age and occupation, and of every rank and station, from gentle folks down to the very poor, were divided into two groups without their choice, and, in most cases, without their knowledge.” He is effectively describing randomization, a practice crucial to modern epidemiology, but not widely during Snow’s era. He was just clever enough to realize that he could look back at where cholera occurred the last time it came to London, in 1849, and then wait for the disease to strike again. Prior to the change in water supply, people contracted cholera at roughly similar rates no matter where they got their drinks. If fewer people who sourced their water from the Lambeth Company got sick the second time around, that would suggest it was something in the water that made them ill.

Another cholera outbreak began in August 1854, and Snow immediately began collecting data. His results showed that folks getting their water from Southwark and Vauxhall, which sourced water from within the city, had a death rate of 315 per 10,000 households. Those with the cleaner Lambeth Company water died at a rate of just 37. The rest of London hovered around 59.

At nearly exactly the same time, Snow also performed another crucial experiment in the Soho part of London. He had lived in Soho before and when cholera struck the city in 1854 it was one of the worst-hit neighborhoods. On the night of August 31, 56 people fell ill nearBroad Street. There were 143 new cases the next day and 116 the day after that, with hundreds dying within days. Snow went to investigate the water pump on Broad Street, but didn’t find enough evidence of contamination to prove his case—so he turned to data.

He went to the Registry of Deaths and mapped out every fatality in the area. Most of them were from the households right around the Broad Street pump, and for the 10 or so deaths that occurred in homes farther away, Snow went to talk to the families to see whether they had any connection to Broad Street. Five, it turned out, walked farther to get water from the contaminated pump because it generally had better water. Two very distant cases, in Hampstead and Islington, turned out to be the result of an older woman living in Hampstead who got her water specifically delivered from the Broad Street pump—she had offered the water to her visiting niece who had returned to Islington where she died at home.

Snow then went to work on all the people who didn’t fall ill. A Workhouse for inmates had been surrounded by houses struck by cholera, yet had only five deaths out of 535 prisoners—the Workhouse had its own well, so the vast majority were drinking perfectly safe water. A local brewery was similarly untouched, and when Snow visited the owner the man informed him that all the men avoided the water, preferring to stick to beer.

Armed with his data, Snow managed to get the local Board of Guardians to remove the handle on the Broad Street pump so residents couldn’t get their water there. By that time the outbreak had likely already begun to die out, in part because the locals were so freaked out that they fled the area. But the handle removal effectively stopped the outbreak in its tracks.

A later investigation found that the well beneath the pump was positioned close to a sewer, which had gotten contaminated when a baby’s dirty diaper had been thrown in. The baby had cholera and, through the Broad Street water pump, shared it with hundreds of its neighbors.

Despite all this convincing evidence, the Board of Guardians put the handle back on the pump without fixing the sewage problem. They all still believed in the miasma theory, and to follow Snow’s advice would be equivalent to admitting that the still-controversial germ theory was true. Plus, it seemed they were right: no one got sick again once the handle came back. Of course, the cholera bacteria had by then been flushed from the system, but they didn’t know that at the time.

The medical community didn’t accept the bacterial source of cholera until the mid-1880s when microbiologist Robert Koch discovered the bacterium Vibrio cholerae (though an Italian anatomist, Filippo Pacini, had actually isolated it in 1854 but was unable to grow it in the lab and thus couldn’t prove the connection to cholera). Koch also proved that anthrax and tuberculosis were caused by microorganisms, a discovery for which he was awarded the Nobel Prize.

Snow himself refused to drink plain tap water for the rest of his life, insisting on boiling it first. That practice would later become standard for all physicians when using water or tools on their patients. It’s still common in many communities that lack safe and reliable public water works to this day. Unfortunately, Snow didn’t live long enough to see his ideas gain acceptance; he had a stroke in 1858 and died just six days later.

His work on cholera, though never fully acknowledge during his lifetime, was one of the founding events in the history of epidemiology. Today, researchers use very similar statistical techniques to suss out the environmental and pathogenic causes of diseases. We have the original John Snow to thank for our modern understanding of infectious disease—and, perhaps, the fictional Jon Snow to thank for his tireless work against the incurable disease of White Walker-itis every Sunday night.