Make your Android and Apple devices work together

Create harmony among your gadgets. 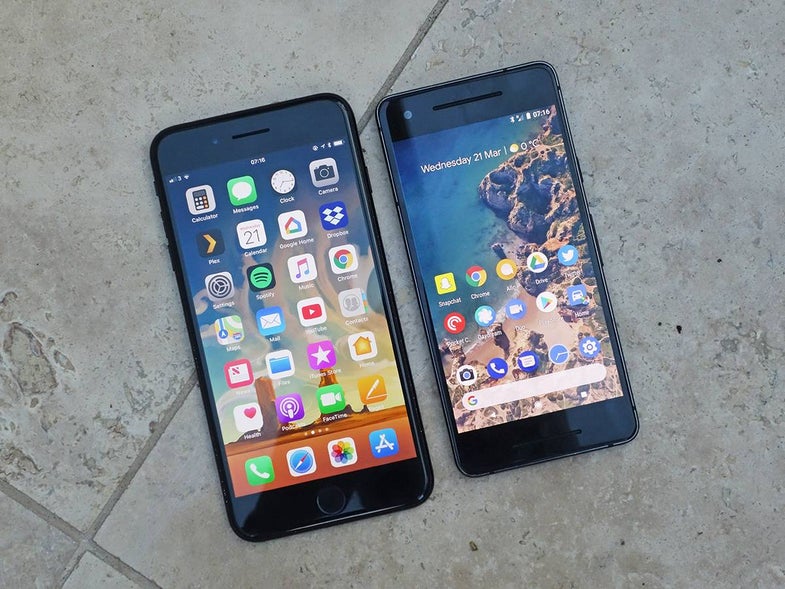 You don't have to use Android and iOS side by side, but you certainly can. David Nield
SHARE

This story has been updated. It was originally published on March 22, 2018.

Android and Apple mobile devices require different apps, offer different features, and work best with different brands of computers and smart hardware. All of this makes it difficult to use them together, but that doesn’t mean you have to restrict yourself to one company’s approach. For example, you might want an iPad for streaming your favorite shows and an Android phone for communication. Or perhaps you dislike the idea of walling yourself into a Google-only or Apple-only tech ecosystem. Whatever the reason, there are ways to make Android, iOS, and iPadOS play nice.

1. Decide on your preferred platform

Don’t bother attempting to treat the competitors as equals: Pick a favorite operating system and keep that phone or tablet as the primary one. This is where you’ll store your most vital data and apps, so it should be the one you feel most comfortable with, have been using the longest, or already have most of your information on. The second one can act as a backup with a more limited selection of apps and data.

There are a few reasons to pick favorites. First, incompatibilities between the systems mean you won’t be able to get every app you want on both gadgets. In addition, some apps, such as Snapchat, only let you sign in on one device at a time. If you download one of these device-limiting programs on both, you’ll have to log in and out constantly.

For a happy union of Android and Apple devices, familiarize yourself with the apps that are available on only one or another. This might help you decide which to make your primary device. For example, you can download all of Google’s apps onto your iPhone, but only one Apple app works on Androids: Apple Music. So you should opt for iOS or iPadOS if you rely on Apple apps like Pages or Numbers, you use Safari extensively on a macOS computer and want to sync your bookmarks and history to your phone, or you purchased a lot of media content from Apple. You won’t be able to access any of those things on an Android device.

Also be aware of the apps we mentioned earlier, which allow you to log in on only one device at a time (as opposed to the programs like Instagram and Netflix, which permit logins on multiple devices). Run an audit on the apps you use most often to check how many logins you’re allowed. Then download the single-login apps to your primary device.

3. Install all your Google apps on iOS

If you primarily store your data in Google apps like Gmail, Google Drive, and Google Maps—you’ll be able to access it on both iOS, iPadOS, and Android. Google regularly updates its apps across all platforms, so you can, and should, download them to all your gadgets, irrespective of the operating system.

Google will automatically store your data in the cloud and sync it to multiple phones or tablets. In other words, you’ll get Google Drive documents, saved Google Maps locations, Google Photos images, and other information on every device you own. Even Google Assistant will run on iOS and iPadOS, but it won’t integrate with the system as well. For example, you won’t be able to summon the Google Assistant unless the app is already open—so no “OK, Google” with a locked phone, and no long-press the home button to ask about traffic.

Getting your Apple data on an Android machine isn’t as easy as syncing your Google data to an iPhone or iPad, but it’s still possible.

For instance, the Gmail app for Android can access your Apple email. Tap your avatar or the circle with your initial in the top right, then hit Add account. Finally, choose Other and enter your Apple login credentials.

Getting Apple calendar and contact information on Android isn’t quite as easy, and any changes you make won’t sync automatically. Here’s how to set it up. First, log into iCloud in a web browser and export your data.

To share Contacts with Google’s operating system, select all your contacts, click the cog icon in the bottom left, and choose Export vCard. Then open Google Contacts on the web and import the saved file by scrolling down the left-hand menu and clicking on Import.

In the Calendar app, click the Share button to the right of your calendar, then tick Public Calendar and copy the URL that appears. Next, open Google Calendar in a web browser and scroll down the left-hand menu. Click the Plus icon next to Other calendars, followed by From URL. Enter the URL that Apple Calendar gave you. This data will then sync to Google Calendar on Android. Although you can make edits on an Apple device and see them on Google Calendar, the sync is only one way—your Android device can’t edit information on your Apple calendar.

As you’ll notice, syncing dedicated Google or Apple apps between the operating systems can be a hassle. Whenever possible, try to use OS-agnostic apps that don’t care whether they run on iPadOS, iOS, or Android. These will sync seamlessly between your devices as long as you use the same sign-in credentials.

For entertainment, watch movies through Netflix and listen to music through Spotify. For cloud storage, stash your files in Dropbox. The same goes for messaging and calling: You might set up Skype for video calling and Facebook Messenger for texting friends. You can even choose a neutral digital assistant, because Amazon’s Alexa is available for both Android and iOS.

When you use Android and Apple devices alongside each other, the cloud is your friend. The more data you keep online rather than in local storage, the more you’ll be able to access on any device.

[Related: Free up space on your laptop by moving all your files to the cloud]

So if an app asks you where you want to save a backup or store data, choose the cloud option if it’s available. Many apps now default to cloud storage anyway, but if you get the option, take it.

In addition, don’t bother paying for multiple cloud-storage systems—aim to stick with either Google Drive or iCloud. iCloud pricing currently starts at $1 a month for 50GB of storage, while Google will charge $2 a month for 100GB (or $20 a year for the same space). If you plan to make your iOS phone or iPadOS tablet your primary device, you might opt for iCloud, which only works within the Apple ecosystem.

7. Get help from a computer

If you have trouble transferring files between your Android and Apple devices, enlist the help of a mediator—namely, your computer. Going through this third party can succeed when a direct connection between phones or tablets fails.

You can employ a similar trick to transfer notes between Google Keep and Apple Notes. Syncing their contents can be very difficult if you keep the apps on separate devices. But it’s easy if you perform the transfer on your computer. Open the website version of each app—Keep and Notes—in tabs on your computer’s web browser. Log in to both sites to access your notes, and then copy and paste the text from one to another.