Due to the pandemic, an estimated 50 million children missed polio vaccines this year. 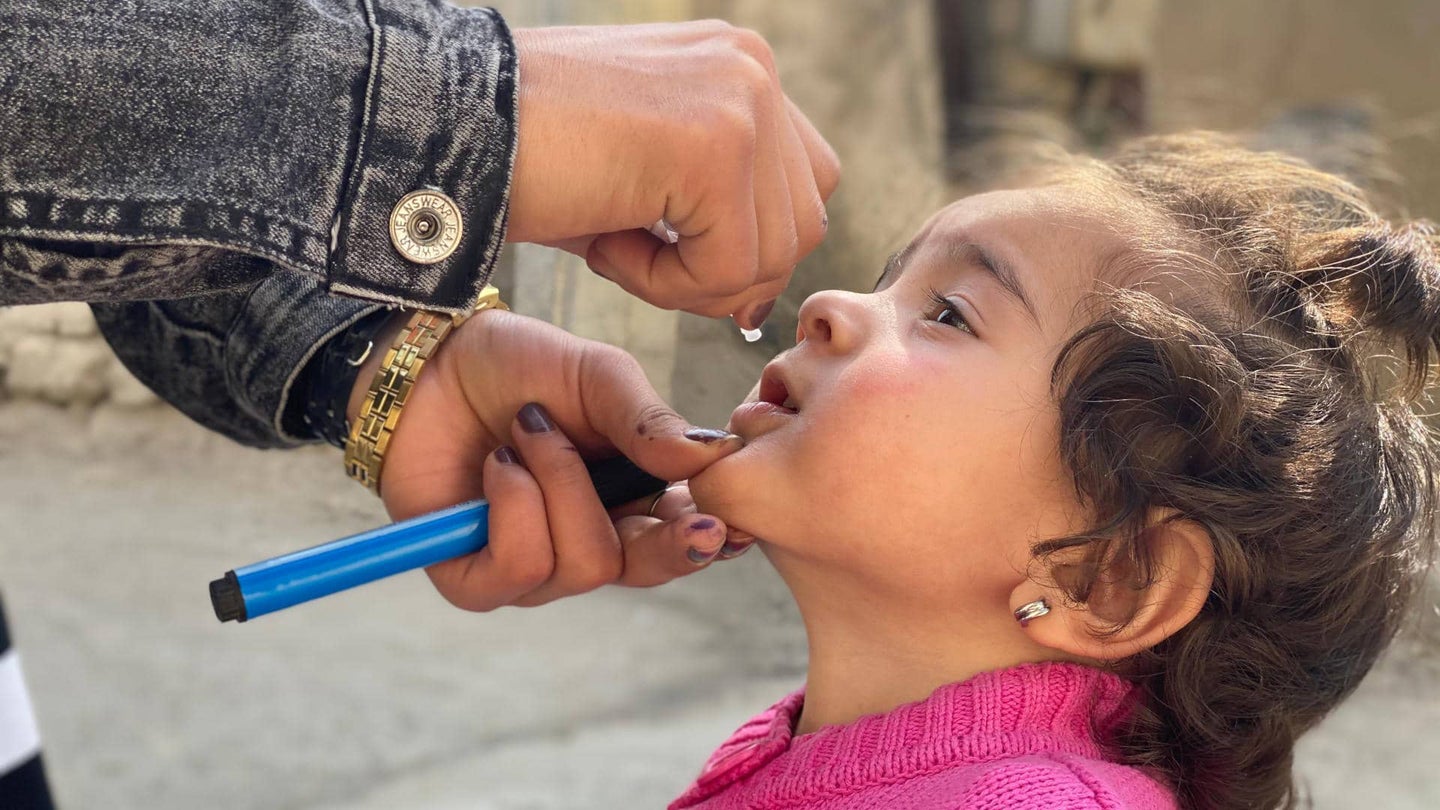 In February, the Covid-19 pandemic halted polio immunization campaigns across Afghanistan and Pakistan, fueling a new resurgence of polio in children. Here, a young girl is given the polio vaccine in the Kabul Province in October after campaigns were resumed. Hikmat Noori/Undark
SHARE

When Saidgil was around 6 months old this past March, his parents decided to take him to Herat, a city about 80 miles from their hometown in Shindand District in Herat Province in western Afghanistan. The road between the two towns is partially unpaved and can be treacherous, infested with Taliban checkpoints.

In Herat, they hoped to get Saidgul vaccinated against polio, since clinics in their district had shut down without warning due to the COVID-19 pandemic. The nationwide lockdowns were yet to be announced, but Herat Province—which shares a bustling border with Iran, a country hit hard by the pandemic—was also reeling toward a crisis.

Unable to get his son vaccinated, Anargul, who like most Afghans goes only by one name, returned to Shindand with his family. But later, the parents noticed that Saidgul was not able to move his left leg. A few days after that, Anargul said, “We were at a party of a relative when we realized that he was not able to move his other leg either. Both his legs were limp.”

The family rushed Saidgul to a doctor, who suspected it was polio, or poliomyelitis, a dreaded disease that had been rumored to have returned to their region. The results confirmed it, said Abdulwahid Rahmany, a vaccination officer for the West Zone that covers Herat province. It was only the second case of polio to have emerged from Herat “in many years,” he adds.

Polio vaccinations are largely targeted to very young children and are highly effective. In the past, polio cases mostly flared up in regions coping with military conflict and Taliban insurgency. Even so, in recent years, health officials had “managed to eradicate polio from many parts of Afghanistan,” says Merjan Rasekh, head of public awareness for the Polio Eradication Program run by the Ministry of Public Health. But now, the COVID-19 pandemic is remapping polio across the country, creating pockets of cases where there recently were none.

“We had to halt the polio campaign between February 2020 and August 2020 due to Covid-19 lockdowns,” Rasekh says. “It created a big gap in the number of children we were able to reach compared to past years.” Saidgul is among 54 new cases of polio in 2020, the highest number on record since the fall of the Taliban in 2001, Rasekh adds. All the recent cases involve children between the ages of 3 months and 3 years, according to the ministry.

According to the United Nations Children’s Fund (UNICEF), the disruption in immunization due to the pandemic left a total of 50 million children without their polio vaccine in Afghanistan and Pakistan, the last two polio-endemic countries in the world.

Rahmany’s experience in Herat is emblematic of the problem. As families stay home in the epicenter of the COVID-19 pandemic in Afghanistan, he says the Taliban doesn’t always let vaccination teams conduct door-to-door campaigns. “We kept the clinics open, but due to the lockdowns and quarantine and insecurity, parents were not able to bring their children for vaccinations,” he says.

“As a result,” he adds, “we only managed to reach 15 percent of our expected coverage.”

“In many ways,” UNICEF notes on its website, “the map of polio mirrors the conflict in Afghanistan. The challenge to reach and vaccinate every child is as much diplomatic as it is operational and medical.”

Those diplomatic challenges include negotiating access to insecure communities that the Taliban control, as well as communicating with families who may be misinformed about the effects of vaccines. During the years of Taliban regime, national polio surveillance in Afghanistan didn’t exist; as a result there is limited information on the prevalence of the disease from that time. But the existence of adults in the country who suffer from permanent paralysis—a possible outcome from polio contracted in childhood—may provide anecdotal evidence as to how widespread the disease may have been.

“The polio situation has improved compared to, I remember 15 to 20 years ago, when it was very bad,” says Alberto Cairo, head of orthopedic program for the International Committee of the Red Cross (ICRC) who has worked in Afghanistan for three decades. “I remember we used to receive quite many children with paralysis. It was very common back then.”

Coverage has since improved. “The vaccination program works,” he continues, noting that there are very few children under the age of 3 who come into the orthopedic clinics these days. Before the COVID-19 pandemic, the few cases they used to see were largely from the southern and eastern parts of the country, where vaccination programs are hard to conduct due to ongoing conflict with the Taliban. In 2018, for instance, more than 840,000 children missed vaccination opportunities in six provinces in the south and east due to insecurity, according to the World Health Organization.

As new battlegrounds formed around the country over the years, many regions became inaccessible to the health ministry and to government polio workers, making it harder to conduct immunization campaigns in the southern and eastern provinces. “Our target population is [to] cover 95 percent of children in every campaign,” Rasekh says, referring to the country’s 9.9 million children under 5 years old. “But we miss around 1 [million] to 2 million children in every round of polio vaccination—and this is a big number.”

Now, COVID-19 has drastically altered the landscape, allowing polio to spread to the north and west, in parts of the country that have not seen the disease in recent years. Of five recently reported cases, Rasekh says, “two cases were found to directly because of COVID-19.” One was a 4-month-old girl from the northwest, he adds, who was born during the lockdowns and could not be inoculated.

In some cases, health workers eventually had to refocus their efforts from vaccinations to fighting the pandemic. “When COVID-19 started spreading in Afghanistan, we were asked by ministry leadership to support them in fighting the pandemic.” Rasekh says. “Our polio workers engaged in fighting the coronavirus, particularly in two areas. One was the surveillance and contact tracing of cases, where we would find cases and report and refer them to the health system. And another was to work with them in communication and community awareness.”

“At the time, fighting COVID-19 was the priority for the Ministry of Public Health,” Rasekh adds, noting that nearly 4,000 polio workers across the country were referred to the ministry to help with the pandemic. And while Rasekh says immunization clinics stayed open throughout all the districts for parents to bring in their children for vaccinations—something Saidgul’s family said was not the case in Shindand—government-imposed lockdowns, increased conflict with the Taliban, and an overall lack of awareness of the disease have prevented many children from getting the vaccine.

Children who are vulnerable to polio may have lifelong complications if they contract the disease. The virus “affects the spinal cord,” Cairo says, destroying the part that controls muscle. The muscles therefore become paralyzed because they are unable to receive the signals they need to move.

“It doesn’t affect sensation, they have full sensation,” he says. “So if you touch the paralyzed leg, they feel pain like me and you. But they lose movement—sometimes it is only a little movement, just one muscle, and other times it is both legs and arms and the trunk also, so you can imagine it is very difficult.”

In eastern Afghanistan, a 6-month-old boy caught both polio and the coronavirus, according to Rasekh. While the baby managed to recover from COVID-19, polio left him paralyzed. “When you have the polio paralysis, it is forever,” Cairo says. “There is no cure for it.”

People with polio paralysis require orthopedic treatment, but that, too, has been curbed due to the pandemic. In 2019, prior to COVID-19, the ICRC center in Kabul would treat about 4,450 orthopedic patients each month. While many were Afghans with various injuries suffered from the conflict with the Taliban, there were also victims of polio. Even after the lockdown, the center stayed open, but significantly reduced the number of monthly patients. “We are now operational, but still are not functioning in full capacity,” Cairo says. According to data provided by ICRC, the Kabul clinic now sees some 2,500 patients per month.

The COVID-19 crisis will affect polio victims in Afghanistan long after the pandemic subsides. The ICRC is concerned about the rising cases of polio, and its staff is expecting to see new patients arriving in the coming months, even years. When it comes to treatments for polio for young children “they really need to follow through,” Cairo says. “For every patient, it is a big commitment and burden, even for the family.” And the challenges of living with polio become even harder outside of urban centers where little help is available, he added.

But there are some signs of hope. While COVID-19 is far from over, polio immunization campaigns in the country have resumed, starting with three provinces in the last week of July and extending to half of the country by August. “Being part of the Ministry’s COVID-19 campaign helped us learn how to conduct the campaign more responsibly to avoid transmission of the disease,” Rasekh says. Among other measures, workers wear masks and use sanitizers while in the field.

Rasekh also says the experience of polio teams will be invaluable in the future dissemination of the COVID-19 vaccine when it is eventually released and reaches Afghanistan.

The majority of vaccination campaigns in Afghanistan are conducted by female health care workers, who provide the ministry with better access to households in an otherwise deeply conservative society. “Women are welcome inside the homes where men would not be allowed—they can not only provide vaccines and talk to the families and mothers and create awareness, but also help survey if there are unreported cases,” he says.

Since most of the polio cases are still centered in the south and east, in insecure provinces that share border with Pakistan, the Afghan health ministry is working in collaboration with their Pakistani counterparts to ensure the disease is eradicated on both sides of the border. “There is a lot of cross-border movement between the two countries,” Rasekh says, referring to the large number of Afghan refugees that emigrate to Pakistan, as well as the high number of people who return. The health ministries aim to “ensure that people of all ages who move across the borders should be vaccinated,” he adds.

If polio is not eradicated in Afghanistan and Pakistan, the WHO estimates that it will spill into other countries, and that within a decade there will be 200,000 new cases every year globally.

“One infected child can put at least 200 others at risk,” Rasekh said. “So we cannot fight it without widespread vaccinations.”