Constant bargain hunting makes us value all the wrong things about shopping. 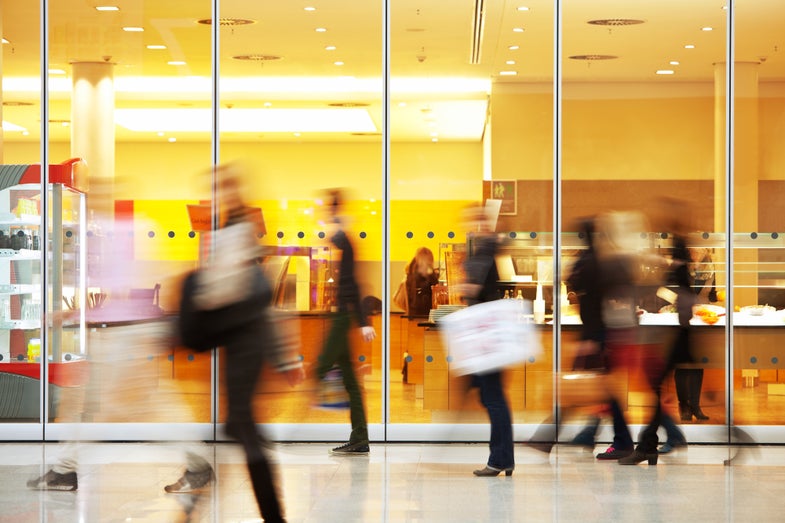 I wasn’t supposed to be looking at leather jackets in Macy’s. Had I gone in the entrance closest to the online order pick-up desk, I wouldn’t have found myself stroking the smooth lambskin sleeves of a black moto jacket placed conveniently in my eyeline. But I did. I tried it on, fell in love, then looked at the price tag: $450. Nevermind.

Less than a week later, I was Googling the jacket for the fifth time when I saw the words I was hoping for: SALE. The online store marked it as 45 percent off, plus I had a 15 percent off coupon for joining their mailing list. I was getting a $450 jacket for $210.

I have spent the last week telling almost everyone I know about this jacket, but I haven’t once mentioned how soft its sleeves are or the flattering way it cinches at my waist. I have instead, almost exclusively, told people what an amazing deal I got.

This is a problem. Because the reality is that I didn’t get as great a deal as I think I did, and more importantly, because I’m valuing the wrong thing. But this isn’t just a problem for me. We all do it.

“Shoppers put way too much emphasis on what they’re spending, and not enough emphasis on what they’re buying,” explains Kit Yarrow, a consultant and consumer psychologist at Golden Gate University. “They’ll buy things that don’t fit them quite right, or it’s not the right color, or they didn’t really need that thing in the first place.” To understand why, we have to go back in a time a bit to before the Great Recession.

Prior to 2008, discounts weren’t as commonplace as they are today. You could reliably buy winter coats on sale in the spring, or cheap bathing suits in September, and you knew that those savings were genuine. That lovely wool coat was 50 percent off because it was the end of the season, and stores were trying to offload unsold products.

That’s not how it works anymore. We don’t wait until the end of the season to buy a discounted coat. We expect it to be on sale long before then. I was disappointed to see that $450 price tag, but I also expected that at some point I’d be able to buy in on sale. And clearly I was right.

Retailers know that we all have this expectation, so they use so-called planned reductions. Yarrow explains that companies often price products with the assumption that almost no one is going to pay the sum on the tag. They go in planning to still make a tidy profit when an item goes on sale, so they factor in a future discount (usually between 20 and 40 percent) and inflate the initial price.

So, that incredible deal I got might as well have been the full price. Except it’s even worse. We’re actually more likely to pay a certain price if we think it’s discounted. I may have been able to say no to a $210 leather jacket, if only it hadn’t once been $450.

“Bargains are the Achilles heel of the consumer,” says Yarrow. “During the recession, consumers became trained to look for a bargain. And now that retailers know that, it’s no longer really a bargain. It’s a pricing manipulation to create a rationalization to buy.”

And what’s more, pretty much every retailer is doing exactly the same thing. When my beloved jacket went on sale on the manufacturer’s website, it also went on sale at almost exactly the same discount at Nordstrom and Macy’s. That’s not because they all talk to each other, but because they’re all performing the same calculations. They have to. I checked every website before I chose to buy it from the manufacturer, and I only went with them because of that extra mailing list discount. They’re all just competing to offer the biggest discount they can possibly muster, and this cycle of constant bargains toys with our emotions.

We’re less objective about our purchases when we feel we’re getting a great deal, and we end up being happy about the bargain we got instead of the thing we obtained.

“When I interviewed people 7, 8, 9 years ago about a purchase they made, they would talk really lovingly about a thing they added to their life,” explains Yarrow. “They’d say ‘it’s got these velvety sleeves’ or ‘this crock pot has all these useful functions on it that I love.’ Now people tell me, ‘oh my god, I got the best deal.’ And I say, ‘but what did you get?’ And they go, ‘oh yeah, I got this cute blouse—but I got such a great deal.'”

It’s not the act of getting a bargain that’s so damaging, it’s the endless cycle of seeking them out. Instead of valuing the items they’ve purchased, people are thriving on the thrill of the deal. But that little burst of adrenaline you get from scoring a bargain fades pretty quickly, and soon you’re itching for your next fix. Yarrows calls it “the biggest psychological landmine for consumers right now.”

A bargain pulls on your heartstrings in a way that few, if any, sales tactics do anymore, and they’re being used in an orchestrated fashion that ends up undermining what’s valuable about shopping. Adding something truly useful and enjoyable to your life isn’t shallow consumerism. Purchasing an item that makes your day-to-day life more comfortable or beautiful can be a real joy, and we should embrace that side of the shopping equation. But as Yarrow puts it, bargains are “robbing people from truly picking products that they’ll love.”

Try something new this holiday season. Try valuing things, not deals. Don’t buy a sweater that’s a little baggier than you’d like just because it’s 30 percent off. Buy the sweater you absolutely adore, even if it’s more expensive (or even if it’s not marked down at all). Buy it because it will bring you real pleasure to wear. Then, when you get a compliment on it, resist the urge to talk about its cost. Instead, talk about how you love its softness or the way it breathes while staying warm because it’s 100 percent real wool. Make a budget and stick to it—obviously, if you absolutely need a sweater and can only spend $15 on it, you should just work to get the best bang for your buck—but when it comes to impulse buys, don’t settle for something that’s simply a good bargain.

As for me, I’m not telling another soul about the incredible deal I got on this jacket. I’m going to tell them what I really love about it—its thick yet supple leather and its flattering cut—and hope that I can retrain my brain in the process.