Colorblind? This app could help fill in the gaps. 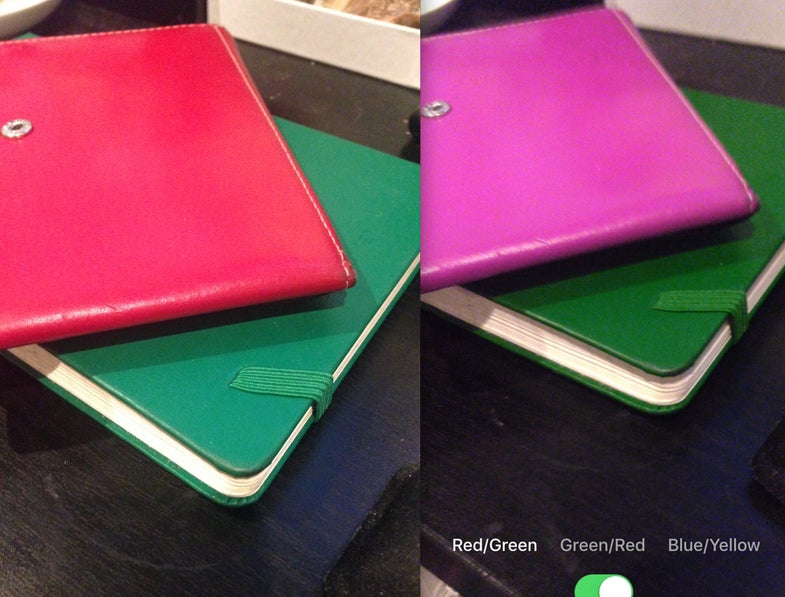 A new app from Microsoft is designed to help people with color blindness see the world a little bit more clearly.

Color Binoculars, created by two Microsoft software engineers (one of whom is colorblind), applies a filter to incoming images, changing the colors on the screen to ones that are easier to distinguish.

People with color blindness have difficulties distinguishing between colors. Usually this manifests as an inability to distinguish between red and green, and sometimes blue and yellow.

People see colors thanks to structures in their eyes called cones, which let us see variations on three colors; red, green, and blue. When one of those types of cones is altered (usually color blindness is an inherited trait) then it becomes more difficult for an individual to distinguish between two colors.

Looking at red and green objects through the app (which uses your phone’s camera) will make the reds brighter and more pink and the greens darker, making differences between the two more obvious. It won’t correct the colors, which is a complaint seen on the app’s forums. To be clear, an individual with color blindness won’t be able to suddenly see red or green using the app, but they will be able to distinguish between red and green objects. They might more easily be able to identify that a red and green sweater had a striped pattern, for example, even though they still wouldn’t see red or green as most of us do.

There are glasses that can also help correct colorblindness but those often cost hundreds of dollars. The app, on the other hand, is free.