How to conduct human drug trials without needing any pesky humans

Meet the body on a chip 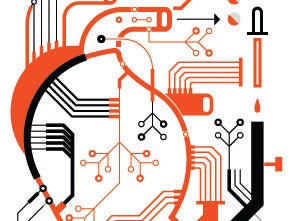 Earlier this year, French company Biotrial held a clinical trial to test a new anti-anxiety drug. It didn’t go well: Five of the eight participants became ill, and one died. Disasters like this are rare. But also rare are clinical trials that go well: Ninety percent of drugs tested on humans do not work. These failures are an expensive but necessary part of the estimated $2.6 billion it costs to bring a medicine to market.

A lab in California is working on a more efficient and humane process, based on a quarter-size plastic slide. It’s a tiny replica of the human brain, rendered in clusters of about 300,000 cells surrounded by small copper wires. Based on that, Lawrence Livermore ­National Lab (LLNL) researchers have set out to build a comprehensive human body in miniature. Called the iChip, it could be the future of drug testing.

“Most people aren’t really thrilled with us injecting anything new into a human,” says Heather Enright, an iChip researcher. But testing drugs on animals instead provides limited information. For example, tumors develop differently in mice than they do in humans. With iChip, a dose of a new medication could be injected into the cells of a mini organ, and researchers could monitor the effects without harming live subjects.

In addition to the brain, and a peripheral nervous system (think spinal cord), the LLNL scientists have created a rudimentary heart and a tangle of 3D-printed blood vessels, which they plan to use to link organs together. The end product won’t look like tiny human innards, but the network of cells, vessels, and neurons will carry out the same functions. Right now, the biggest challenge is “getting the cells to be happy on the device,” says Elizabeth Wheeler, the project’s principal investigator. Cells are picky, and can die in response to subtle changes in acidity or humidity. That’s why it was notable when, in July, the team announced that they kept a section of a human nervous system ­functioning for a record 23 full days.

Harvard, MIT, and Los Alamos National Lab (LANL) are building tiny organs of their own, which could one day link up with iChip. Beyond testing drugs, organs on chips could be made with a specific patient’s cells to find the best treatment for that person. “Everybody responds to drugs a little differently,” says Jennifer Harris, a researcher at LANL. Such personalized regimes could be the future of medicine.

This article was originally published in the November/December 2016 issue of Popular Science, under the title “Human-Free Human Trials.”