A New Cold War In The Void Of Space

Through a satellite darkly 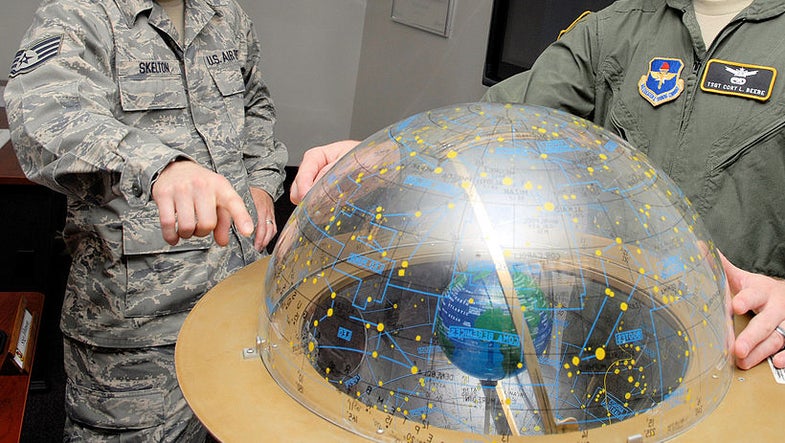 By treaty, outer space is a weapons-free zone. In the future that might not be the case. America’s defense establishment, including the Department of Defense as well as intelligence agencies, are building a center to plan for war in space.

There is already a military aspect to space. Air Force satellites, which provide information ranging from GPS to weather to high-resolution maps aren’t weapons themselves, but definitely play a military role. In the Cold War, the Soviet Union reportedly armed a satellite with an aircraft cannon. China and the United States have both shot down their own disabled satellites–removing dead weight from orbit, perhaps, but also showing explicitly that the countries can destroy satellites at will.

The United States Geospatial Intelligence Foundation is an organization that wants to coordinate government, the defense sector, business, and academia on the matter of intelligence in space. This week they’re holding a symposium in Washington, DC, with prominent Pentagon officials speaking. On Tuesday, deputy secretary of defense Bob Work announced that American defense and intelligence agencies are going to build an operations center to plan for war in space.

The quip is that the Pentagon makes plans for so many wars, they even have one for Canada. The Pentagon denies a specific Canada invasion plan, but the Pentagon has planned for a lot of seemingly unlikely wars, including some outright fictional scenarios, like this zombie apocalypse exercise. Space war falls more into the middle camp, a possibility to be studied just in case.

Having access to satellites is tremendously important for the military. It’d be terrible for the United States to lose them in war, but just in case, it’s good to have a plan.