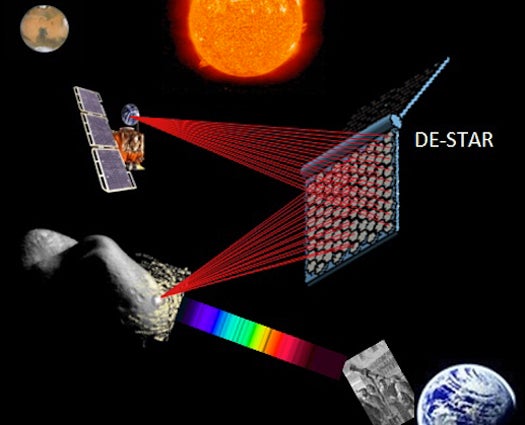 After the double-whammy of a meteorite hitting Russia and a near-miss with an asteroid, some scientists have been thinking over how to deal with space rocks. A team of California scientists is offering up an answer that sounds a little, uh, familiar.

UC Santa Barbara physicist Philip M. Lubin and California Polytechnic State University San Luis Obispo researcher Gary B. Hughes have unveiled plans for DE-STAR (cough, cough), or Directed Energy Solar Targeting of Asteroids and exploRation. The system, they say, could slowly vaporize earth-bound rocks over the course of as much as a year. From a UC Santa Barbara news release (emphasis mine):

Described as a “directed energy orbital defense system,” DE-STAR is designed to harness some of the power of the sun and convert it into a massive phased array of laser beams that can destroy, or evaporate, asteroids posing a potential threat to Earth. It is equally capable of changing an asteroid’s orbit –– deflecting it away from Earth, or into the Sun –– and may also prove to be a valuable tool for assessing an asteroid’s composition, enabling lucrative, rare-element mining. And it’s entirely based on current essential technology.

The scientists went through several plans for a potential asteroid-zapper, all of varying sizes, including one about the size of the International Space Station, called DE-STAR 2, which could start to “nudge” an asteroid in a different direction. DE-STAR 4, at about 100 times the size of the ISS, could vaporize a 500-meter asteroid in a year. Here’s the description for DE-STAR 6:

Larger still, DE-STAR 6 could enable interstellar travel by functioning as a massive, orbiting power source and propulsion system for spacecraft. It could propel a 10-ton spacecraft at near the speed of light, allowing interstellar exploration to become a reality without waiting for science fiction technology such as “warp drive” to come along, Lubin said.

Interesting proposal. But the White House will never go for it.