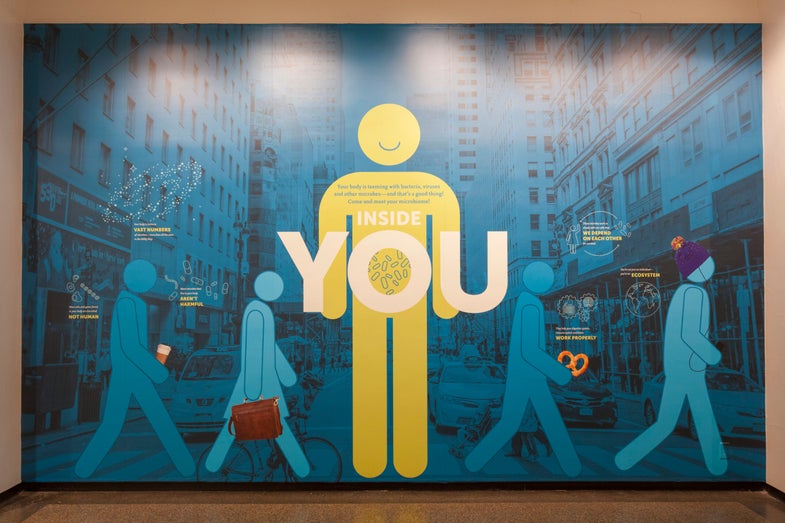 Your body, while amazing, doesn’t function so optimally all by itself. Our bodies are teeming with microbes—in our guts, on our skin—that play a key role in our health; sometimes they can cause disease, but most of the time, they keep us thriving.

Intrigued? You’re not alone, and this fascination is exactly why New York’s American Museum of Natural History has taken on the human microbiome for its newest gallery. “Inside you” is a hallway guide to your body’s invisible ecosystem.

Perhaps one of the biggest surprises, says Rob DeSalle, one of the exhibit’s curators and a molecular biologist at the Sackler Institute for Molecular Genomics at AMNH, is the sheer amount of microbes that reside in and on us. If you were to completely rid yourself of every one of your microbes, you would lose about three pounds of body weight.

The exhibit is a followup to “The Secret World Inside You” an interactive exhibit that opened in late 2015 and is now traveling to museums throughout the country. As visitors enter, wall sized color images of the human digestive tract, the inside of the mouth, and other organs, like those involved in the immune system catch the viewer’s eyes. But instead of being an interactive guide to the inner workings of the human body, giant callouts display the odd looking microbes that reside inside those organs. The key message of these call outs is balance. While most of us associate bacteria and viruses with disease (for good reason, microbes can cause some serious illnesses), scientists have begun to realize, just in the last few decades, their contributions to our health as well.

An image of the digestive tract calls out E. Coli; certain strains of E. Coli can cause some serious diarrhea, but others actually help your small intestines digest food. Microbes in the colon help you to ferment and produce nutrients out of the fiber you eat but can’t digest. Others protect the lining of the gut from inflammation. This is all to say that yes, you should watch out for those bad microbes that can wreck havoc on your gut for a few days. But most of the time you should be considering your gut microbes whenever you eat, and be feeding them with foods that will help them help you.

At the same time, the exhibit aims to show readers that researchers too are attempting to use this newfound understanding to treat disease. Perhaps instead of taking antibiotics which kill bacteria, we could instead take probiotics, which are “good bacteria” to colonize our guts with the optimal microbes. This idea, of purposefully intaking billions of bacteria, doesn’t seem gross at least to this audience. As one couple standing in front of me glanced over at that section, the man said to his partner, “Probiotics, babe, that’s where it’s at.” Scientists seem to think so, too.

Perhaps nothing gets at the delicate balance of the bacteria than a deep dive into your mouth microbes. A giant image of the mouth shows Streptococcus mutans, the bacterial strain responsible for that dreaded trip to the dentist and resulting mouth full of fillings. The description warns that while most of the 100 to 200 species of bacteria living on our gums and inside our mouths are harmless, with the right ecological conditions (like too much sugar or simple carbohydrates), other microbes can jump in, feed off of this new environment, and cause tooth decay.

A lot of people don’t understand that our microbiomes are an ecosystem, says DeSalle. That’s why it’s so appropriate for this museum, he says. It’s a forgotten piece of the environment that affects us everyday.

While the exhibit is in New York, it’s hard to tell from the examples themselves. One section shows a map of the world with call outs describing the different gut ecosystems depending on where in the world you live. People in Japan enjoy a steady diet of seaweed in many meals because a gene in their gut bacteria are able to break down that fiber. Residents of New Guinea are able to sustain themselves mostly off of sweet potatoes because of a gut bacteria that provides them the proteins they are missing.

Although we have gained a tremendous amount of knowledge about the microbiome, there’s still so much to learn, and the exhibit makes that clear that researchers are still figuring out what a “healthy microbiome” really looks like. But it’s clear from the excitement on people’s faces as they walk through the interactive gallery that the gut microbiome thrills more than grosses them out. Still there’s a bit of work to do in that area. When the same couple that was excited about probiotics, walked by the section describing fecal transplants (where you take a sample of poop from a healthy person, freeze dry it and give it in pill form to a person whose gut is out of whack), they made a face at each other that was along the lines of, YUCK! But we’re getting there.