The Air Force has an ambitious plan to wean American aviation off oil. But will the cure be worse than the disease? 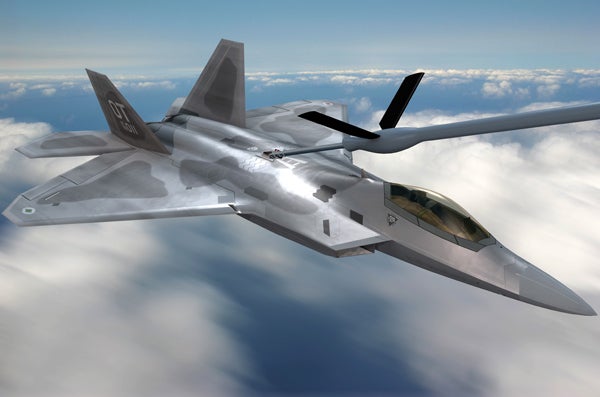 Off Oil, On Coal

The Air Force uses more fuel than any other branch of the military—2.5 billion gallons in 2007 alone.

In the not-so-distant future, cars could run on electricity, power plants on wind and solar energy, and city buses on zero-emission hydrogen fuel cells. But airplanes? Those just might run on coal.

Yes, coal. The U.S. Air Force wants to create a synthetic-fuel industry that, unless something better comes along, will mine America’s massive coal supply (we have more than a quarter of the world’s known reserves) and turn it into enough jet fuel for half its domestic operations to run on a 50/50 blend of synthetic and regular fuel by 2016. By the Air Force’s logic, it has no choice. It uses more fuel than all the other branches of the military combined, burning through 2.5 billion gallons of the stuff in 2007 alone—10 percent of the total used by the entire domestic-aviation fuel market—at a cost of $5.6 billion. And although oil prices have dropped in recent months, no one expects the relief to last indefinitely.

Yet alternative fuels for aviation are hard to come by. The Air Force says it’s open to all sources of power for its fleet, but according to former assistant secretary of the Air Force William Anderson, petroleum, natural gas and coal are our only current options—and when you look at the U.S.’s resources, the choice is clear. “We’re not the largest holder of oil reserves, so that’s not a good option,” he says. “We’re not the biggest holder of natural gas. But we are the Saudi Arabia of coal.” So the Air Force is doing its best to spark a domestic fuel industry that would be devoted, most likely, to digging new coal mines and building the country’s first major coal-to-liquids (CTL) plants. To make the market bigger, it wants to convince the other branches of the military and even domestic airlines to run their fleets on liquefied coal, too.

From a purely martial perspective, the strategic benefits of this plan are obvious: The U.S. would use far less oil imported from countries it doesn’t get along with. But there are problems, like the fact that the plan could generate twice the carbon dioxide emissions of current fuels—making it, thanks to a special clause in the 2007 energy bill, illegal. 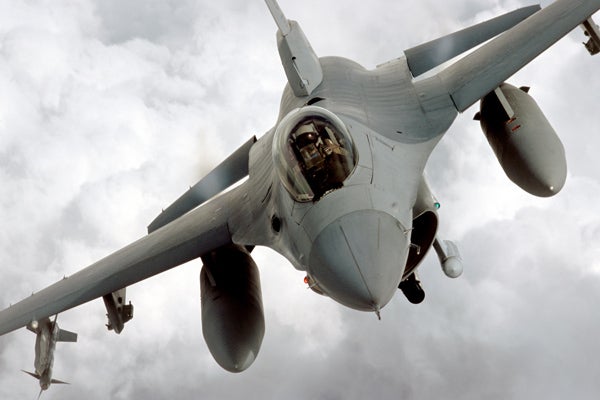 GAS-GUZZLERS OF THE SKY

The Air Force flies some 51,000 aerial refueling missions a year in support of aircraft like the F-16 Falcon [right] and the B-2 Spirit stealth bomber.

One good thing about transforming coal into jet fuel is that we know how to do it. In the 1920s, German scientists figured out a method for turning raw materials such as coal and natural gas into liquid fuel. It essentially involves steaming the coal to produce a hydrogen-and-carbon-monoxide gas, and then, through something called the Fischer-Tropsch process, exposing that gas to a series of catalysts to convert it to a liquid fuel. Hitler used the technique to power Germany in World War II, and during apartheid, when South Africa was facing embargoes, its government tweaked the process so that it could produce jet fuel as well. Once you’ve got the fuel, it’s just a matter of proving that your planes can run safely on it. The Air Force has certified the B-52 and C-17 for unlimited use of a 50/50 synthetic fuel blend; has tested its B-1 Bomber, F-15, F-22 and KC-135; and aims to certify its entire fleet by 2011.

CTL proponents, aware that coal has an image problem, fend off criticism by saying that the fuel is actually “greener” than jet fuel made from petroleum. What they mean is that during the gasification process, jet fuel from coal is scrubbed clean of particulate emissions as well as sulfur dioxide and nitrogen oxide—the stuff that causes acid rain—so it is in one sense cleaner to burn. But that leaves out a crucial bit of information: Between mining the coal and burning the resulting jet fuel, coal-to-liquids fuel produces twice as much CO2 as the existing petroleum-derived fuel. The potential effect of creating a market for CTL fuels is frightening enough to environmentalists that last year Representative Henry Waxman, who now heads the House Committee on Energy and Commerce, added a clause to the 2007 energy bill—Section 526—forbidding the U.S. government from spending taxpayer money on fuels that emit more greenhouse gases than the fuels we’re already using.

That hasn’t stopped the Air Force from moving ahead with its plan—it simply says that the companies that produce the fuel will have to figure out a way to comply with Section 526. So while lobbyists for both the coal and petroleum industries work aggressively to get Section 526 repealed, potential CTL suppliers are looking into technology that could, theoretically, clean coal-based jet fuel enough that it’s the greenhouse-gas equivalent of petroleum.

There are a few ways to get there, none of them easy, including recycling CO2 by running it back through the Fischer-Tropsch process to produce more fuel (after all, carbon dioxide has carbon in it, the same energy source as fossil fuel), using the CO2 to grow oil-producing algae, or turning the carbon into usable industrial gases. The Air Force estimates that it will be at least a decade, however, before any of those technologies can be used at anywhere near a broad scale. More feasible is using CO2 for something called enhanced oil recovery—liquefying and pumping the CO2 into dying oil wells to push remaining oil to the surface. But the danger in that process is that it might contribute to the very problem it’s trying solve, because the energy required for liquefication will almost certainly come from carbon-emitting fossil fuels. Then there are long-term consequences to consider. Will the carbon dioxide leak out of the oil well? No one knows.

How to Fly on Coal

The same long-term concerns vex another oft-discussed solution: carbon capture and storage. Currently being done at several small demonstration plants outside the U.S., this process involves capturing the CO2 as it’s released from the Fischer-Tropsch reactor (the part where the synthetic gas turns into a liquid fuel) and pumping it into formations underground—essentially sweeping it under the rug, where it may or may not stay. But according to Lowell Miller, director of the U.S. Department of Energy’s Office of Sequestration, Hydrogen, and Clean Coal Fuels, the real challenge of carbon sequestration is the vast amounts of money it will take to make it work. University of Manitoba professor Vaclav Smil has estimated that sequestering just 10 percent of the world’s 2005 CO2 emissions would require more plants and pipelines than are used in the entire worldwide business of crude-oil extraction. And there are other setbacks. Last year the Department of Energy canceled the main feature of its FutureGen project—the creation of the country’s first commercial-size coal-fired plant that would capture all of its carbon emissions—because it was so far over budget.

Ultimately, the question is this: Is it better to send American aviation down the road toward coal-based fuel without a clear idea of what to do about the extra carbon emissions, or to keep on burning billions of gallons of imported oil every year? The lack of alternatives makes this debate tricky. Finding renewable sources of jet fuel is “going to be tough, there’s no doubt about it,” says Tyson Slocum, director of the public-interest group Public Citizen’s Energy Program. “You can’t put solar panels on a jet airplane.”

The problem can even make committed environmentalists soften a bit toward oil. Henry Henderson and Shannon Fisk of the Natural Resources Defense Council suggest that we scrap liquid coal entirely and invest in oil-saving technologies that we already have, like hybrid and electric cars and trucks. That could free up more oil for jet fuel, lowering its cost and buying time to search for sustainable alternatives. 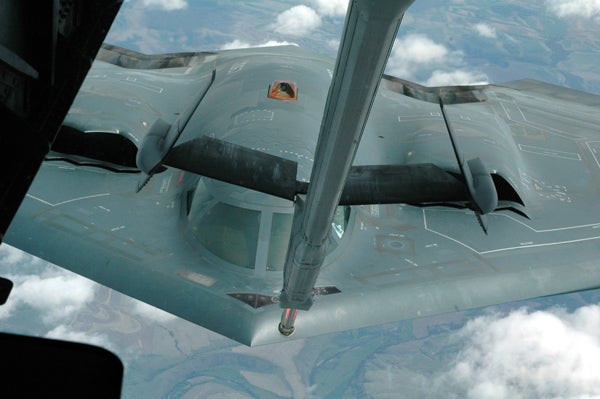 The B-2 can fly across the world in a single run as long as it’s fortified with several hits from an airborne fuel tanker along the way.

Eventually, new biofuels that cut carbon without raising food prices could be the answer. Some companies are already working on them. Virgin Atlantic flew a jumbo jet from London to Amsterdam last year using a fuel partially derived from Brazilian babassu nuts and coconuts. Last September saw the launch of the Sustainable Aviation Fuels Users Group, a coalition of Boeing, the NRDC, and several other airlines and environmental groups that aims to encourage the development of low-carbon fuels. In the meantime, the American military might very well start powering its future using the hydrocarbon fuel of the past.