The Green Side of the Moon 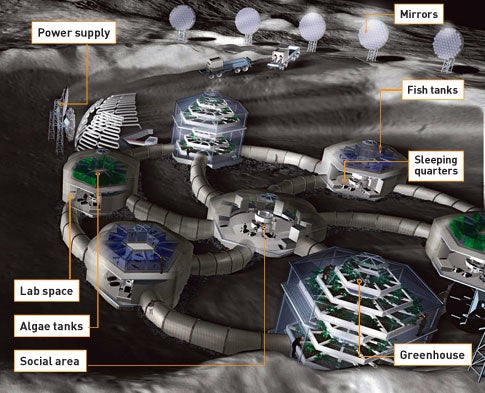 For a look inside the luxe lunar base equipped with everything from gardens to studio apartments, launch our interactive animation here.

Astronauts will probably miss out on the luxurious quarters and gourmet meals planned for space tourists, but moon living may be cushier than expected. Luna Gaia, a habitat designed by an international team of scientists, engineers and graduate students, provides up to a dozen astronauts with fresh vegetables, fish, spacious rooms and clean drinking water (albeit recycled from their own urine).

The group designed the self-sustaining habitat, which harvests solar energy and reuses all of its waste, while attending the summerlong Space Studies Program at the International Space University in Strasbourg, France. Now, with interest in the moon accelerating thanks to NASA’s focus and Google’s new Lunar X Prize, Luna Gaia is proving to be more than just an academic exercise. In the past year, the team has presented the plan to several space programs, including NASA, which may incorporate ideas from Luna Gaia into its own lunar outpost, planned for sometime after 2020. “It’s a really good stepping- stone toward designing an outpost on the moon,” says William Marshall, a physicist at NASA’s Ames Research Center.

According to the plans, Luna Gaia will be a complex divided into linked, studio-apartment-size pods. Situated in a crater to limit its inhabitants’ exposure to solar radiation, it would include private and social areas, labs and exercise rooms, and greenhouses in which astronauts could grow the food necessary for a balanced diet. Filters, plants and bacteria will turn wash water and urine into potable water. Algae and other greenery turn carbon dioxide into oxygen. Overall, the group estimates, these systems would make Luna Gaia 90 to 95 percent sustainable, meaning fewer service trips, longer visits and a clearer conscience.

Designs call for Luna Gaia to be built in a mile-wide crater near the moon’s north pole. The crater wall casts a shadow that protects the astronauts from solar radiation.

A dozen mirrors, each 100 feet wide, sit on top of the crater’s rim, an area that’s nearly constantly bathed in sunlight. These direct light onto another set of mirrors that focus the beam on a water supply, creating steam that drives a turbine and generates electricity for the base.

Luna Gaia will consist of several inflatable modules made of Vectran, a flexible material that’s more durable than Kevlar and can be compressed in transit to help keep delivery costs down. The greenhouses will be transparent, but living quarters will be covered with a layer of regolith, or lunar soil, to provide added protection from radiation.

Tilapia are high in protein and thrive in a crowded tank. Astronauts will also dine on hydroponically grown wheat and a variety of vegetables, such as spinach and potatoes. The same algae that cleans up the crew’s water will be a good source of protein.

Urine runs first through an ion-exchange filter that removes some contaminants and then into the algae tanks, where the algae drink it up and release water vapor that a condenser liquifies. This water either runs back to the crew quarters for washing or is further purified to make it drinkable.

Several different strains of bacteria break down feces into water, minerals and ammonium. These materials are converted into nutrient-rich fertilizer and pumped into the plant, fish and algae chambers.