Brain training to get the gold 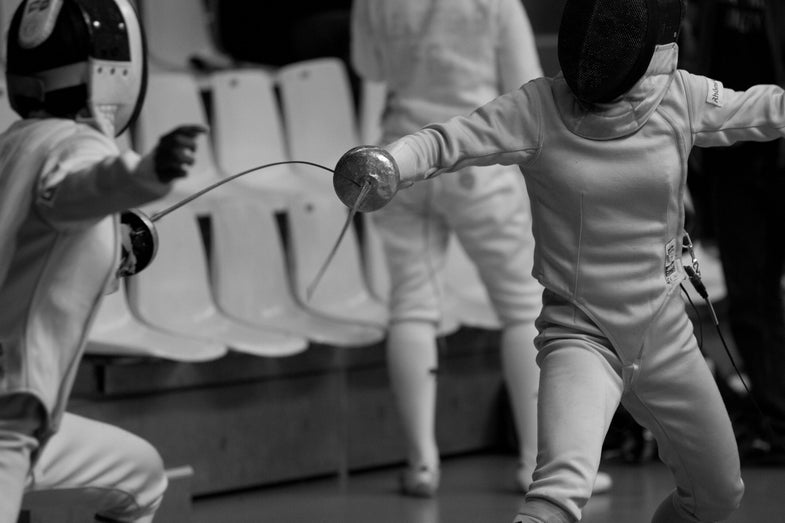 Fencer Miles Chamley-Watson has a chink in his plastron: He’s easily distracted. In a fast-twitch sport of thrusting and parrying, the slightest lapse in focus means a blade at your thorax. Luckily, there’s an app for that.

Chamley-Watson’s official sponsor, Red Bull, employs experts who study stubborn weaknesses in their athletes, and find unique ways to hack them. In Chamley-Watson’s case, they turned to neuroscientist Leslie Sherlin, who created an app-based mental-training tool. Sherlin has worked with big-wave surfers and eSports athletes, and has devised a mental training “game.” The app was calibrated to suit Chamley-Watson’s needs. “Your brain has different electrical signatures, whether you’re focused, concentrating, drowsy, relaxed, whatever,” Sherlin says.

To fine-tune an athlete’s focus, the app works like a video game—and Chamley-Watson’s brain is the joystick. Sherlin’s team first identified the electrical signature of the fencer’s brain in a state of focus. Then they calibrated a game so the same signature would trigger the movements of an on-screen avatar, a wing-suit flier.

Wearing a sensor-studded headset, Chamley-Watson zeroes in on a feeling of focus to guide his avatar on an iPad or iPhone screen, and thus boost his concentration skills. Our sense of focus is generally outside our awareness, so by moving his avatar, Chamley-Watson can learn to harness that feeling and thus better control it. “It’s a game changer for me,” says Chamley-Watson. “I think I have the physical aspect over everyone in the world. But mentally, I need an edge. I don’t think anyone’s doing what I’m doing. I don’t think people even know what it is.”

Focus isn’t every athlete’s weakness, and Sherlin’s team can calibrate accordingly. For instance, a surfer might use his game to improve relaxation, while an NBA forward might use it to sharpen situational awareness. As for Chamley-Watson, it doesn’t matter if he achieves Kasparov-level focus—he is a distracting presence on the fencing piste. Tatted-up, with bleached-blond hair, the 6-foot-4 New Yorker doesn’t fit the fusty stereotypes of his sport. In 2013, with superhuman reach and the reaction speed of a mongoose, he became the world champion. Nevertheless, recognizing the exact second to strike is as crucial as striking itself, and Watson says everything from a referee’s call to the crowd can throw him.

Still, Sherlin can see from the raw data why Chamley-Watson is favored to win in Rio. “Miles has really great reaction speed,” says Sherlin. “He processes information very quickly, and he doesn’t make a lot of mistakes.” Now Chamley-Watson’s opponents will know who to call to help them relax after they lose.