As written by a millennial who’s gone from tapes to streaming apps, and everything in between. 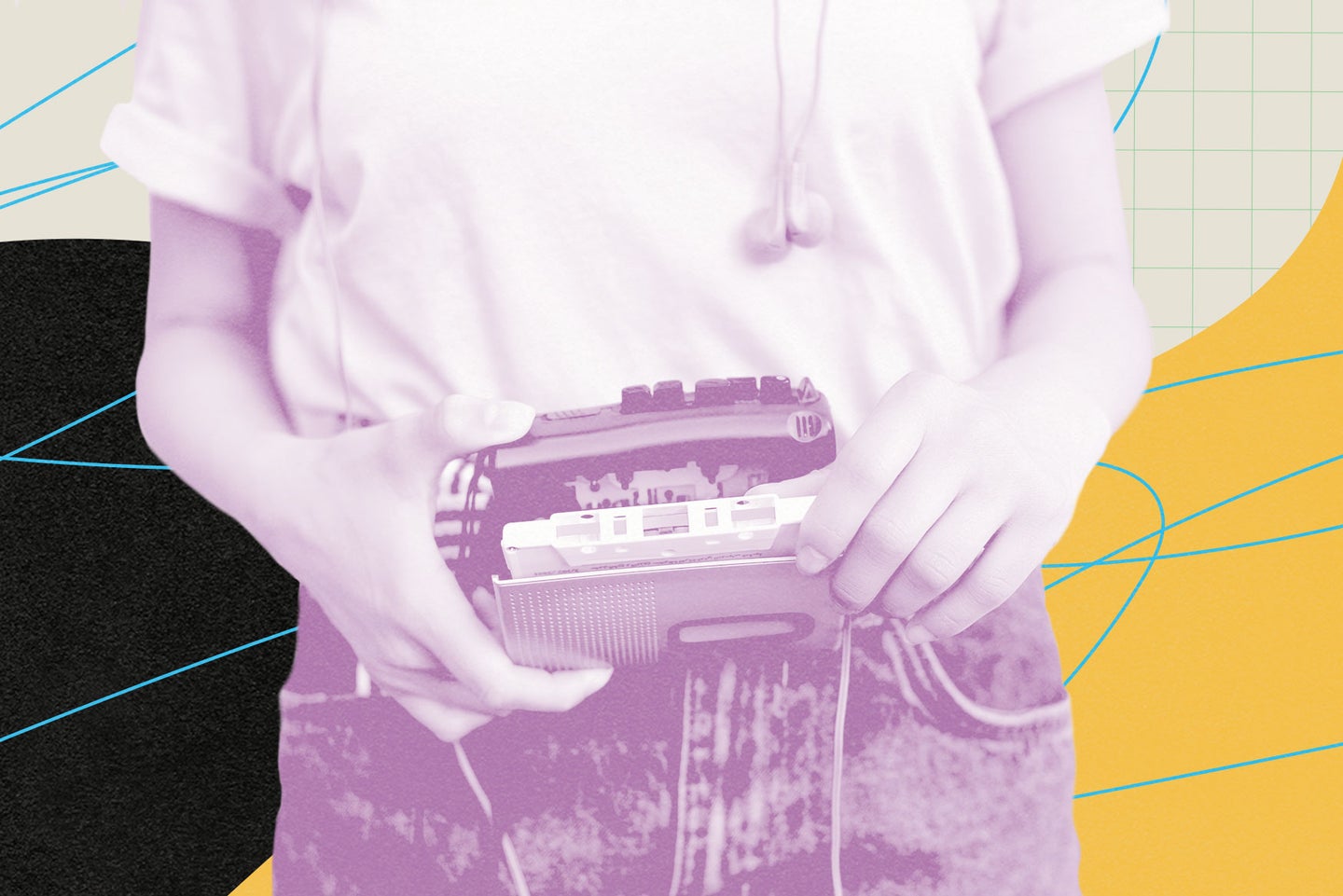 Wait, is this how it goes?. KostyaKlimenko / Deposit Photos
SHARE

Gather round, kids—let me take you on a stroll down memory lane.

As a millennial, I was lucky enough to witness everything that happened as the internet started to change the world. Back then, phones weren’t smart and had buttons, and if you wanted to listen to that earworm song you couldn’t get out of your head, you only had two options: call your local radio station (on a landline!) or carry it around with you on a cassette.

Why we would ever want to go back to torturing our bodies by carrying plastic cartridges that play music is beyond me, but we certainly are—2020 saw an increase in cassette sales of 103 percent compared to the previous year. Nostalgia may have a lot to do with it, but more and more artists have hopped on this trend, revitalizing the market for cassette players. Today you can easily find these boxy devices in electronic stores and other retailers for as little as $15.

But having grown up in a world where phones are just a screen and you can play any song you could possibly want with a single tap, you may have questions about how to play music on your new old-looking cassette player. Worry not, young one—here’s everything you need to know about this blast from the past.

Nowadays, not too many things besides your little brother’s toy truck and those fairy lights you got from Amazon use disposable batteries.

But cassette players do. These devices commonly require two AA batteries to work, and as they run out of juice you’ll notice things start going lower and slower.

When you open the deck of your player, you’ll see two protruding tubular pieces of plastic right in the middle of the slot you hook the cassette on to play it, also known as the drive. Those are called sprockets, and their job is to engage the spools inside the cassette and rotate them at a constant speed of 1.875 inches per second. This allows the tape to run over a magnet head at the bottom of the drive to play sound.

[Related: How shape-shifting magnets could help build a lower-emission computer]

The mechanism inside cassette players consists mostly of the motor making the sprockets spin. As you drain the batteries, the tape runs through the magnet head at a slower speed, altering the sound by changing the frequency of the audio, resulting in a lower pitch. (This is the same effect as when DJs slow down turntables with their hands.)

Carrying an extra set of AA batteries will solve this problem. Just remember batteries should not be thrown in with regular trash, so keep your old ones with you until you find a proper way to dispose of them.

Pens and pencils are your best friends

If the playback speed of your cassette player is compromised by a draining battery, it should come as no surprise that rewinding or forwarding the tape to the next song consumes power just the same.

What takes a fraction of a second on your phone could take as long as the song itself on a cassette player. Why? If your batteries don’t have enough energy to move the sprockets fast enough for playback, they certainly won’t be able to skip songs quickly.

This is when you become your cassette player’s motor. Just insert the non-writing tip of a regular Bic Crystal pen or a classic No. 2 pencil into one of the cassette’s spools and start rapidly moving your wrist in circles like you’re using one of those spinning noisemakers, letting the centrifugal force balance the cartridge on the pen as you spin it. Back in the day, this was a great way to save battery power for precious music playback.

Spinning the cassette is easy. What’s complicated is knowing which spool to engage, from which side of the cassette, and in what direction.

When playing sound, the sprockets move counterclockwise so the tape can roll over the magnet head from left to right. This means that when you’re listening to your favorite song, the tape is rolling out from the spool on the left, and reeled in by the spool on the right.

To rewind something you’re listening to, make sure you hold the cassette with the side you’ll be listening to facing you. Then, you’ll need to reel the tape back into the left spool by inserting the pen into it and spinning the cassette clockwise. If you get the side wrong, you’ll be forwarding the tape instead of rewinding it.

If you spin it counterclockwise, you’ll see the tape unraveling inside the casing. You don’t want that, but if it happens, just reel it back in and start over.

Get a pair of wired headphones

Back in the mid-1990s, Bluetooth had not yet hit the consumer market. Wireless headphones were only a thing we dreamed about every time our earbuds got yanked out of our ears when the cord got caught in a doorknob.

Now you can find cassette players with Bluetooth capabilities, but if you’re pulling a blast from the past by choosing to listen to your music in a format the industry considered to be dead for almost two decades, you might as well do it right.

Wired headphones compatible with a 3.5-millimeter jack are the way to go. These are inexpensive and easy to come by. If you’ve been using iPhones for a while, there are probably a couple of these inside a drawer somewhere in your home.

If you’ve already eliminated wired headphones from your life or you don’t want to compromise audio quality, you can always go for something fancier that plays nice with analog devices. Shure’s AEONIC 50 headphones, for example, come with a cable adapter you can easily connect to a cassette player jack.

The convenience of the cassette’s small, portable format made it a hit among consumers in the 1980s. But the fact that you can easily erase and overwrite tape made them even more attractive.

In a player with recording capabilities, you’ll generally find two magnetic heads at the bottom of the drive. The one in the center is the playback and record head, which contains a tiny magnet that touches the moving tape, reads the magnetic flux embedded on the ribbon, and generates a signal that is then amplified through speakers as sound.

But the process can work in reverse. This is when the head you’ll see to the left of the drive on a tape recorder comes into play. That particular magnetic head is a bulk eraser that erases the magnetic flux on the tape as it comes into contact with it, deleting all data (read: sound).

[Related: How to digitize all your VHS and cassette tapes]

When you’re playing audio, that head stays down, but when you hit the record (REC) button, the mechanism lifts the head so it touches and erases the tape before it hits the playback head in the center of the drive. Once it does, the playback head receives an audio signal and magnetizes the tape according to that pattern.

But sometimes, there’s a physical barrier that prevents you from hitting the record button when using some cassettes—the absence of recording flaps. If you buy a prerecorded cassette of your favorite artist, you’ll notice there are two holes in the top of your cassette. On blank cassettes—the ones you use to record—these holes are mostly covered by plastic flaps, which you can remove with something pointy, like a pen or a key, to protect your recording.

Those flaps are easily replaceable, though—just get two pieces of tape and use them to cover the holes. That’s it.

What would you use this trick for? Well, if your cassette player happens to have a built-in microphone or an input jack, you can record ambient sound or a conversation with someone. (This is where the phrase “to catch someone on tape” comes from.) Just know that if this is something you want to do, keep in mind that recording someone without their consent is illegal in some states. If your player has another deck or even a built-in CD player, you can make copies of a pre-recorded cassette or CD. Finally, if your player has a record button but no mic, no extra deck, and no CD player, you can record sound from the radio to make a mixtape, the Gen X version of a playlist.

Listen only to what you can carry

One of the main reasons the market replaced cassettes, vinyl records, and regular CDs was that these formats limited listeners to a single album or collection of songs.

Streaming services and devices with more capacity, like MP3 players or iPods, allowed people to carry an entire music library with them anywhere they went, sparing their shoulders the pain of a heavy load.

[Related: How to carry just about anything on your bike]

If you’re going back to cassettes for real, you’ll want to get a bag for all your favorite albums. Just remember that even though cassettes seem light, the weight can add up pretty quickly.  Prioritize your physical health and avoid carrying a lot of cassettes with you.

Always remember that it is 2021 after all, and you’re most likely already carrying a phone capable of connecting to the vast world that is the internet. Worst-case scenario, you can get your Bluetooth headphones, open your favorite music streaming app, and listen to literally almost anything you want only with a tap. Booyah.