How to help kids feel confident in the ocean

Most of this planet is water anyway. 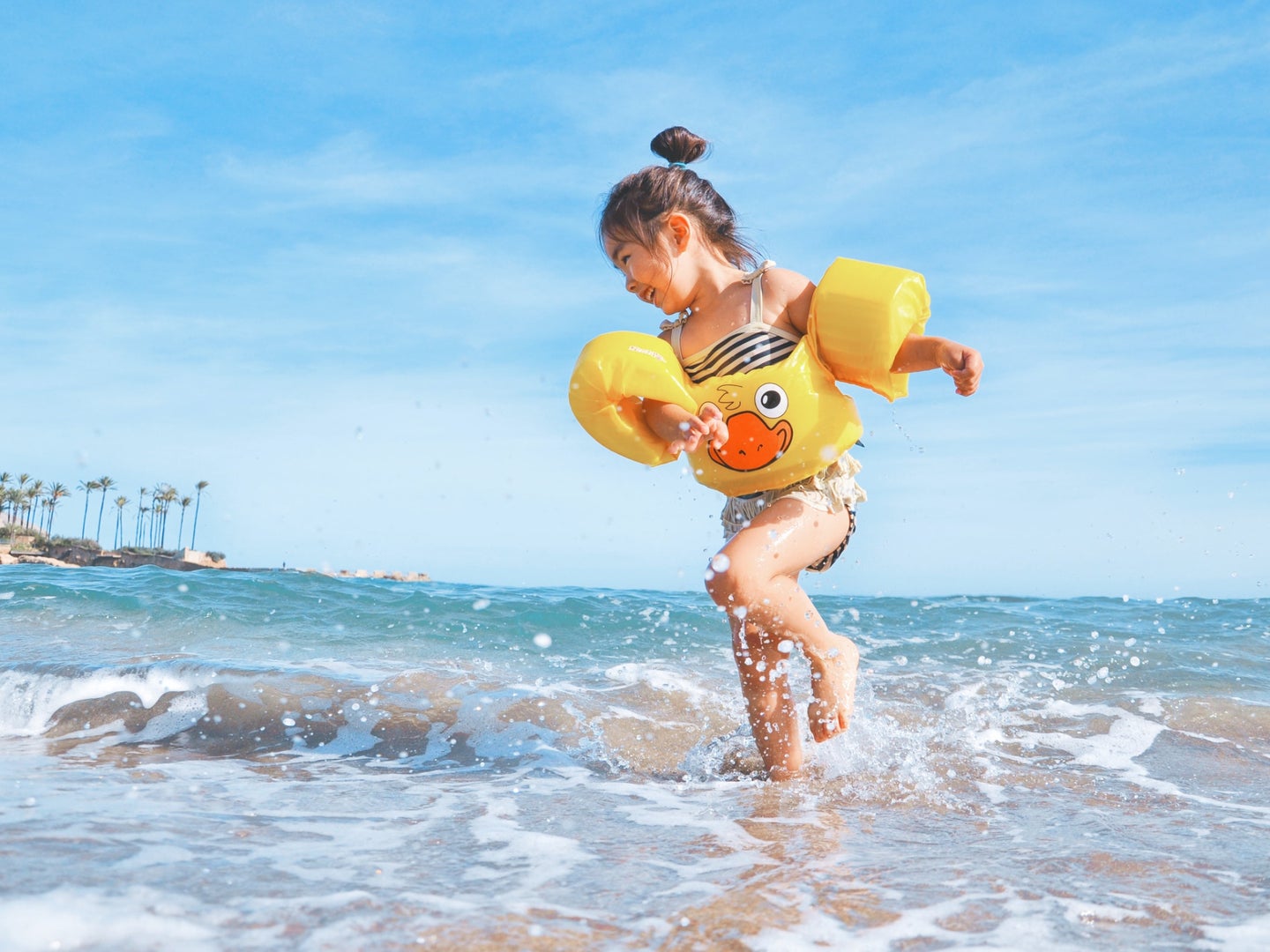 The ocean doesn't have to be a big, scary place. Leo Rivas / Unsplash
SHARE

As soon as I had kids, I began preparing them to be comfortable in the ocean. As a surfer, I thought about how satisfying it would be to paddle out beside my daughters, the three of us angling for waves, dropping down the face, and yooping—that celebratory noise in the surf for the wave or fellow rider.

But my daughters had other plans. They feared the ocean before they could properly speak, stemming from the time an extreme high tide reached our blanket and swept away some shoes. Netflix’s preview for Soul Surfer about Bethany Hamilton, the young Hawaiian surfer who’d lost her arm to a shark, made things worse. For the better part of a decade, I’ve been trying to help them overcome their fears of the ocean and the creatures lurking mostly in their minds.

Gradually introduce them to the ocean

To build their confidence, start small. You can’t expect kids to just launch right into the waves. When my kids were really small, they didn’t even want put their feet in the ocean. So we started by digging a hole in the sand, collecting water in a bucket—that was my responsibility—and then sitting in the hole that we had just filled with a few buckets of ocean water.

“Part of it has to be [kids] discovering it’s a safe space and not just telling them that,” says Mark Thompson, who served as director at the YMCA Camp Surf in San Diego for 19 years. (He’s also my former boss.) “It’s just baby steps. It’s just going in the water. With the most hesitant kids, you want them to get hit by a little wave. You want them to get their face in the water.”

Jumping waves, swimming out back, bodyboarding, and surfing will happen with time.

Bust the myth about man-eating sharks

Even as an adult, when I’m alone on my surfboard, a chop on the ocean’s surface becomes a shark fin. Naturally, it makes sense that kids would have those same thoughts or worse.

But statistics and facts speak volumes.

“Sharks avoid people. If they targeted people there’d be a hell of a lot more than 80 bites a year,” says Gavin Naylor, director of the Florida Program for Shark Research at the University of Florida. “If people were on the menu, there’d be tens of thousands of bites each year.”

(To compare, 80 shark bites per year—that includes everything from nips to fatalities—in America is nothing when you look at the country’s 38,000 deaths and 4.4 million serious injuries resulting from car crashes, annually, as reported by the Association for Safe International Road Travel.)

The shark bites that do occur seem to happen because sharks confuse humans for seals or fish in low-visibility waters.

According to Naylor, following a few common-sense approaches can reduce the minuscule chance of a bite even further. For instance, if birds are bombing into the water to feed on bait fish jumping out of low-visibility waters, don’t wade in. Something larger is likely feeding below. Nearby seal colonies in New England are preferred hunting grounds for great whites; Naylor suggests swimming somewhere else if you see seals nearby. Remove jewelry, as light catching the metal can look like glimmering scales. Other strategies include avoiding swimming at dusk and dawn, and limiting splashing.

Changing the language and the way we look at shark bites can help reduce fear, too. “I don’t think we should use the word shark attack. We should say ‘blacktip bite,’” Naylor explains, referring to a type of reef shark.

[Related: Television’s “Shark Week” may be hurting sharks, not helping them]

Not only does it shift the vernacular from terrifying to behavioral, but it explores the possibility that the shark wasn’t fully at fault. “We ask, what were you doing to your parakeet to make it bite you? Or why did the dog bite you?” says Naylor, suggesting that we should consider that question after shark bites, too. Sometimes sharks are provoked by a harassing diver, or a fisherman ripping a hook from its mouth, or a wader treading across its back. (These incidents are part of the 80 or so annual bites.)

But kids don’t need to know the data. They just need to see a calm parent who reassures them that “the probability of getting bit by a shark,” Naylor says, beginning to chuckle, “is really, really tiny.”Teaching kids about the value of sharks to the ocean and the food chain can also help them respect sharks instead of just fearing them. If you don’t want to wade into these biological explanations, try the podcast Wow in the World. Their Shark Week series provides auditory and humorous lessons about sharks (without the toothy video footage). The first episode even allows listeners to empathize with frightened sharks, which, after sighting an orca, will stay clear of those waters for about a year.

Make sure they can identify danger and know their limits

Teaching your kids how to swim in a pool (or some other calm body of water) is an obvious early step, but the worst thing anyone can do around water is to feel too confident.

It’s also important that kids and parents recognize that the ocean is not the pool. It has unique dangers and tricky surprises like shifting tides, moving rip currents, changing wave patterns, and sudden drop-offs. As much as you might want your kids to feel confident in the water, balance it with an education on the risks. That means discussing and identifying dangers such as rip currents and jetties. If your kids are confident enough to be out in the water, make sure it’s when lifeguards are on duty. Even capable adult swimmers paddling nearby could find themselves unavailable to help in the ocean, as things happen fast and are sometimes out of your control.

[Related: It’s surprisingly hard to tell if someone is drowning]

Getting kids comfortable with ocean sports

Over the years, I’ve taught hundreds of kids how to surf. I can count on one hand the number of children who couldn’t or refused to stand up on the board. My eldest daughter, who was 6 years old at the time of her first surf lesson, is one of them. After giving her instructions on the sand—showing her how to position herself on the board, how to paddle, and how to get to her feet—she strapped on her leash. I carried the foam board for her out toward the waves. It was simple, she was going to lay upon the board and I was going to bring her out to where the gentle waves broke. What I didn’t expect was that she decided to retreat at the shoreline, tripped herself on the leash, and fell down so that a wave washed over her, making her even more fearful of the ocean and the sport.

Thompson points to the power of the group. “A little bit of peer pressure and encouragement is important.” At camp, kids and counselors always hooted for their peers, whether successful or not. Even enrolling your kids in an hour-long surf camp can help tremendously.

According to Thompson, having a competent adult, who isn’t the parent, and who relates to kids, matters. More importantly, they need to understand waves and know which waves to push a kid into. (If the wave is too big, it’s scarring; if the waves are really just unbreaking swell, it’s frustrating.)

“It’s so much easier for a stranger to teach your kid,” Thompson says, having had a similar experience to mine; he’d slightly traumatized his own son two decades earlier by surfing with him on the camp’s rescue board when he was only a toddler. (“He never got back on a surfboard for a couple of years,” Thompson says, adding, “I would never do that with someone else’s kid.”)

Another approach is to begin in flat waters. While both of my daughters rejected the idea of paddling out into the ocean on a surfboard, taking a paddle board out at a lake seemed doable. Without the waves and currents and possibility of sharks, my girls were able to focus on having fun. For the first few minutes, I did the paddling. But when my eldest daughter realized that all was safe, I shortened the adjustable paddle and she took control. Paddling around with a child on a lake is like serving as a gondolier to tourists in a Venetian canal, and there’s almost nothing more soothing than that.