The essential guide from idea to market. 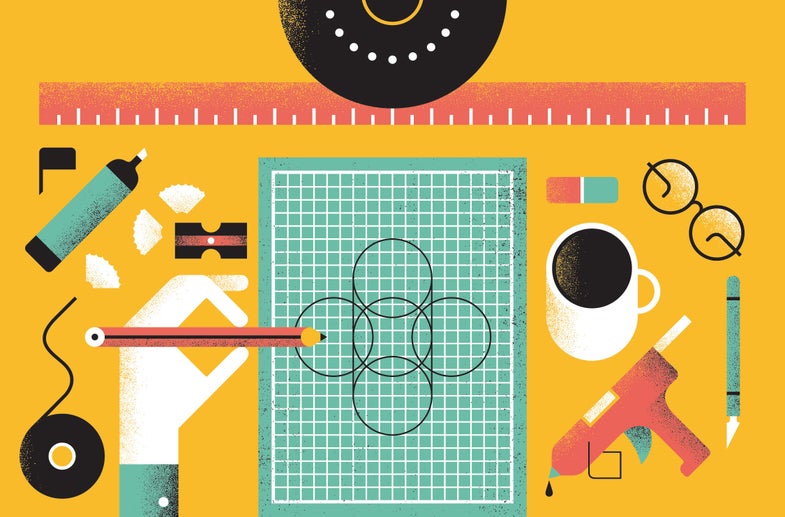 We are living in a golden age of invention.

Makerspaces and online creator communities abound; information is abundant and free; equipment is affordable and available; and crowdsourcing platforms offer a great way to test interest and build excitement around a new idea—as well as to fund it. Because barriers to entry are practically nonexistent, these days anyone can be an inventor.

As a result, the number of amateur creators is on the rise. Nearly half of American adults now refer to themselves as “makers.” Most important, people of every age, gender, and background are involved in this movement.“You don’t have to be an expert in a field in order to make an original contribution,” says Steve Sasson, inventor of the digital camera and a 2011 National Inventors Hall of Fame inductee. “You can become an inventor simply by having an idea, working on it, and refining it.”

All inventions start as an idea—and the first challenge is to find a good one. Where should inventors go looking for that spark of inspiration? We asked successful entrepreneurs and invention experts for their advice.

“Every Wednesday we do a live Google+ hangout called Show and Tell. People from around the world show off what they’re working on. Solving problems that they bring to us is the number-one place I get inspiration for new ideas.”

“I’m inspired by everyone around me, and by reading about what things are like in other parts of the world. When I see someone struggling, I want to do everything I can to ease that struggle.”

Eric Hintz: Historian, Lemelson Center for the Study of Invention and Innovation at the Smithsonian

“In historical studies of inventors, we’ve discovered that they often find the world to be irritating, and they want to fix it.”

“A lot of inventions that come about are because new technologies allow people to apply or combine them in ways that haven’t been done before.”

Fear of failure (or looking crazy or stupid) is the biggest hurdle for inventors.

“You can’t be concerned with that,” says Ayah Bdeir, founder and CEO of littleBits, a platform for easy-to-use modules that snap together into electronic projects. “You have to get over it and jump.”

Inventors, like artists, start with representations before they attempt to make something. Among their methods and tools:

Research—The Internet is a great way to find available materials and possible technologies and techniques you can apply. The broader your search, the better. Mixing disciplines often produces the best results.

Digital Modeling—2-D and 3-D modeling and design software, such as AutoCAD or SolidWorks

The creative process requires trial and error—you must test your prototype, tweak it to make it work better, and then test it again. Repeat over and over again until there’s no room for improvement. The goal is to quickly and inexpensively prove the technical feasibility of your product. Tools for this phase include:

The final prototype should be presentable for potential investors and customers.

Scaling Up—The tools you used in the experimental phase might get the job done, but your final prototype will be built to scale and it will likely entail more expensive materials and more careful design.

Most inventions that die—the good and the bad alike—do so because of a lack of money. For those who are not independently wealthy, there are many options for funding the invention process.

Crowdfunding—S. Brett Walker chose Kickstarter to fund the Circuit Scribe—a rollerball pen filled with conductive ink—because his invention was straightforward (“Everyone knows how to use a pen”) and inexpensive. He also thought it would be a boon for the maker community, which is active on crowdfunding sites; such platforms can also test interest in an idea.

Competitions—In 2007, NASA challenged the public to design the next generation of astronaut gloves. Peter Homer, an engineer, took first place for his design and used the prize money to start a company. Similar invention challenges are hosted by Netflix, the Bill and Melinda Gates Foundation, and—for young inventors—the National Inventors Hall of Fame and Georgia Tech.

Self-funding—Limor Fried started Adafruit by investing $10,000 of her own money. This let her test interest and get immediate feedback. “Rather than trying to raise $5 million and then blowing it all because there’s a flaw that you didn’t realize, first do a small manufacturing run of a handmade design, using money you put in yourself,” she says. If customers like your idea and you listen to their feedback, she says, you’ll soon see profits.

Investors—Prior to co-founding the company behind communications gadget goTenna, Daniela Perdomo worked with tech startups. So she already had venture-capitalist connections. They provided funds to build goTenna, in exchange for a slice of the company. “If you don’t have a network in the tech world, there are a lot of VCs and angels who publicly post their emails or are active on Twitter,” she says. But the best way to pitch your idea is a personal connection or an introduction: “Investors find social validation to be valuable,” she says.

Outsourcing—Licensing or selling your intellectual property can spare you the hassles of a startup. For Alexander Nectow, the co-inventor of Retro-TRAP—which enables high-resolution molecular studies of the brain licensing to two drug companies was a no-brainer. “My major interests are in basic science and research, not starting a company,” he says. “I preferred to let others apply the tool for their own needs.”

Ideally, you’ve been developing a community of “true believers,” as tech entrepreneur Danielle Applestone calls them—people who know about and support your product. Get your prototypes into their hands first. Not only will those people provide valuable feedback, they’ll also spread the word.

To extend your reach, evangelize about your product at conferences, meetups, and hackathons, and write about it in forums and blogs. The media can also help you reach new audiences and build your customer base. Seize upon every opportunity for an interview, even if it’s not with a major news outlet; you never know who the story might reach. Most companies hire professional marketers to help with this phase. Finally, use feedback and market research to determine demand. This will help you set the pace for scaling up.

The challenges of scaling up production often catch inventors off-guard, so the earlier you begin thinking about manufacturing and introducing yourself to manufacturers, the better equipped you will be for the future. A typical company might reach 1 percent of the total market in its first year, 3 percent in its second, and 5 percent in its third. So if your total market is about 10,000 people, you’ll need to make 100 products your first year.

For anything fewer than 1,000 units, you should probably just build your products in-house, following the same procedures you used for your prototype. For 1,000 to 5,000 products, team up with nearby manufacturers to ensure an easy working relationship and low transportation costs. Once you hit 10,000 units, however, you’ll need to find a large-contract manufacturer.