How To Build Your Own DIY Centrifuge 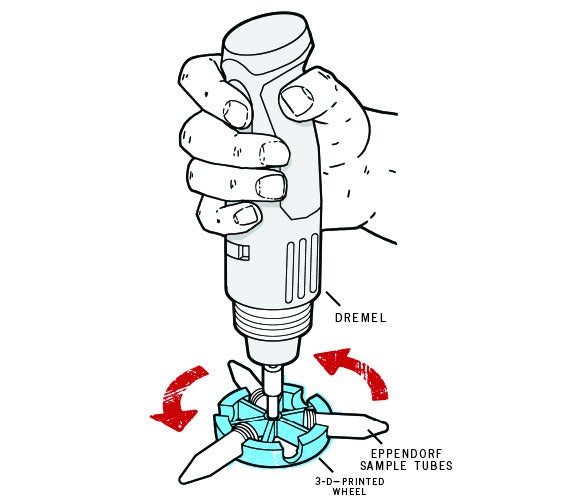 For any garage-ista ready to tackle molecular biology, the centrifuge is an essential laboratory tool. Its super-rapid spin supplies the right G-forces to neatly separate biological materials—including cells, proteins, and DNA—from a liquid. University-grade centrifuges sell for about $2,000, but synthetic biology enthusiast and inventor Cathal Garvey figured out how to build one with a Dremel tool and a 3-D–printed wheel. The combination can spin samples up to 33,000 rpm, creating forces 50,000 times stronger than Earth’s gravitational pull.

1) Download schematics for the Dremelfuge wheel here. Two designs are available; pick the one that fits a Dremel 300 (not a standard drill).

2) 3-D–print the wheel in ABS plastic, using hexagonal infill to strengthen it. (PLA is another common printing material, but Garvey says it tends to shatter under high G-forces.) If you lack a 3-D printer, order the wheel from Shapeways.com for about $50.

3) Screw a rotary-tool disc holder into the wheel’s axis, and attach it to a Dremel.

4) Fit any tubes containing a biological sample into the wheel, ensuring each has a counterweight: a tube on the opposite side with an equal amount of liquid. Otherwise, they might damage the wheel and the Dremel and make a mess.

5) Hold the Dremelfuge in a Styrofoam cooler, and let ‘er rip! The foam will absorb the impact if a tube pops off.

WARNING: Use shatterproof eye protection, and operate the Dremelfuge inside a sturdy container, as the device can throw off hunks of plastic at dangerously high speeds.

The cells lining your inner cheeks constantly slough off into saliva but are too small to see individually—which makes them perfect candidates for testing the Dremelfuge.

1) Swab a Q-tip inside your mouth for about 10 seconds to grab some cheek cells.

2) Dip the cotton tip repeatedly in a tube filled with isotonic saline solution to dislodge the cells. (Make your own solution from salt and distilled water, or buy wound wash at a pharmacy.)

3) Fill a second tube to the same level as the other one. Insert the tubes in opposite slots in the 3-D–printed wheel.

4) Run for one minute at the Dremel’s second setting (about 10,000 rpm). You’ll see a whitish pellet at the bottom of the tubes. Voilà! Isolated cheek cells.

Projects
august 2013
build it yourself
centrifuges