Nick Offerman On Why We Should Build Stuff

The Parks and Recreation star talks about tinkering. 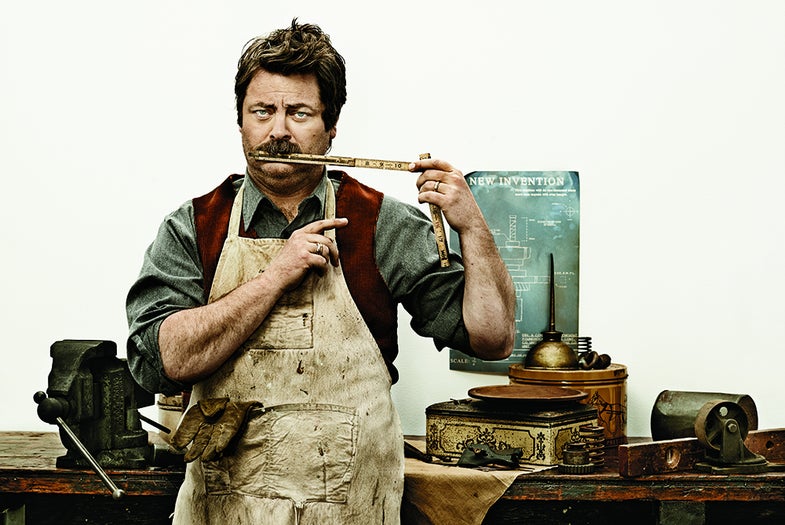 On the TV show Parks and Recreation, Nick Offerman plays the whiskey-quaffing, meat-loving, self-reliant Ron Swanson. He’s also a skilled woodworker who grew up working on a farm in Illinois and got into acting by building sets. “Keeping whatever calluses I can on my hands is an important part of my personality,” he says. Offerman sat down with Popular Science to explain why.

Popular Science: One of our favorite Ron Swanson lines is: “Any moron with a crucible, an acetylene torch, and a cast-iron waffle maker could have done the same…. People who buy things are suckers.” How much have your own interests crept into your TV character?

Nick Offerman: A great deal of Ron is taking aspects of my life and writing them in a cartoony way. I would not have the ability to rip a couple sconces off the wall and hand you a couple wedding rings a half an hour later, but I do make a lot of stuff at my shop. It’s a frequent topic around the writers’ room. The fact that I could make a canoe or a paddle or a jig for flattening wood slabs seems like absolute necromancy to them.

NO: I’ve been in here for about 14 years, and four or five woodworkers work with me. They’re always cranking out prototypes—everything from old-fashioned shaving kits to canoe paddles to meat-carving implements. We’ve got one big room with machines where you can pretty much make anything you dream up out of wood. The other room is full of wood slabs. Whether we’re building an enormous dining table or a tiny box for an engagement ring, we come in and look at the big pile of wood.

PS:What do you think of newfangled fabrication tools like 3-D printers?

NO: I think they’re really neat-o. But here at Offerman Woodshop, part of our flavor is that everything is made by hand. I draw the line far beyond a 3-D printer. We won’t even use a cutter jig to cut our dovetail joints. Depending on the intelligence of machinery, to me it’s a liability factor in woodcrafted pieces. Unless you put your hands on every inch of the piece, you don’t know if there might be a flaw.

PS:The Invention Awards celebrate people who build things too, often in their own home or garage workshops. Does woodworking sometimes feel like invention?

NO: I’m astonished by the flat-out smarts of these inventors. They’re in an entirely other league. But one of the things that’s so addictive about woodworking is that it is just a sequence of problem solving: How can I use these tools and these hands and this pencil to turn this stack of tree limbs into a beautiful chest of drawers? It requires a tinkerer’s brain.

PS: A lot of the people who entered our Invention Awards are proud tinkerers, whatever their chosen hobby.

NO: What’s beautiful about the human being is that there are those of us who have a propensity for problem solving. We say, “Okay, this screen door keeps blowing open. How can I most conveniently solve that problem?” The majority of people wouldn’t have the inclination to go into their box of miscellaneous hardware and say, “Here’s a spring, here’s a hinge, here’s a shim—how can I MacGyver these into a solution?”

PS:Does woodworking have anything in common with acting?

NO: If you take a couple steps back and squint your eyes, you can see some similarities. They both require tools and technique that you want to keep sharpened so they cleave your material as cleanly as you would desire. But one allows you to get your hands much dirtier than the other.

PS:If you could give one piece of shop advice, what would that be?

NO: Generally I find that if I keep my shop neat and organized, I get a lot more done. I work with people building scenery, especially in the theater, that have a very messy shop. That’s part of their vibe. They’re a Pigpen-style whirlwind, and when the dust settles, they’ve built this beautiful throne or whatever it is. But we spend so much time looking through piles of detritus for a 5/8-inch socket. When you know where everything is, it just makes for a much more efficient work system.

PS:One thing you would advise them never to do?

NO: I’d advise people to be wary of time-saving gadgets. Things that generally cost a lot and are simple are that way for a reason.

PS:You’re an accomplished woodworker now, but there must have been a lot of experimentation along the way. How important is it to fail?

NO: It’s incredibly important. My dad taught me that in his basement workshop. When I screwed up my first projects as a seven- or eight-year-old, he said, “That’s good— you can’t learn to do things right any other way than by doing them wrong first.”

NO: Probably the spokeshave. It’s so named because it was used to make spokes in the days of the wooden wagon wheel. It’s really satisfying because you can use it to sculpt anything of a certain length or a serpentine shape quite expeditiously.

PS:You posed in a scenario that Norman Rockwell painted as our October 1920 cover. Why did that appeal to you?

NO: It’s because I want my life to resemble a Norman Rockwell painting as much as possible. No matter what happens, I always want to remember that all I need is some space and a table saw and a spokeshave and some friends, and we can make some stuff.