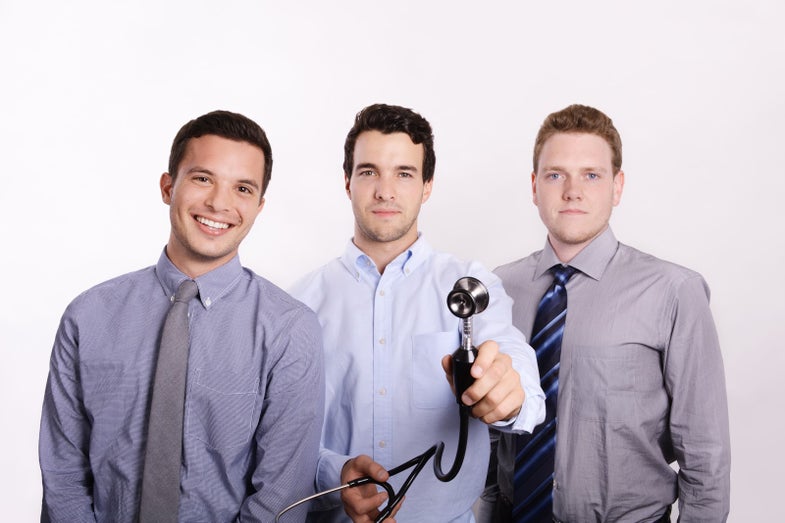 Connor Landgraf, co-founder of the startup company Eko Devices, had his “Eureka!” moment while pursuing a degree in bioengineering at the University of California – Berkeley.

“It all got started in 2013, in a senior design class,” Landgraf recalls. “The professor brought in a number of people to talk about medical technology. These were young residents at a really prestigious medical school, who had grown up in the smartphone era. One of them pointed out a stethoscope and said, ‘I don’t understand the utility of this thing.’”

Landgraf had come to UC-Berkeley with a passion for exploring mechanical and biological systems. The resident’s comment got him to thinking about how little the basic principle behind the stethoscope has changed since 1816, when it was invented by French physician Rene Theophile Hyacinthe Laënnec at the Necker-Enfants Malades Hospital in Paris.

Faced with a female patient and the standard option of pressing parts of his body against hers to hear internal sounds, Laënnec grabbed a random sheet of paper and rolled it into a tube, enabling him to conduct the examination on a more decorous basis.

The stethoscope has undergone numerous improvements since then, including electronic amplification. However, according to Landgraf until now the stethoscope has never fully embraced the advantages of today’s digital and wireless technology.

“It’s an icon of medicine, but physicians have a hard time using it,” says Landgraf. “It takes a lifetime to master. I thought, ‘we have connected devices, why can’t we build a 21st century stethoscope?’”

Landgraf’s own academic career provided him with a singular perspective on building bridges across historical divides. He was home schooled during his grade school years, immersed in an educational model quite common in Laënnec’s time but a rarity today.

“Being home schooled enabled me to figure out how I learned, and what made me tick. I got into robotics and programming,” explains Lansdorf. “I knew coming out of high school that I had a passion for building things and a huge passion for medicine. Bioengineering is perfect for understanding what makes the world move, and for understanding the limitless potential of biology.”

This sense of mission propelled Landgraf to junior college before arriving at UC-Berkeley, where all the pieces fell into place.

As someone who knows himself pretty well, Landgraf knew that he needed help to get his new stethoscope concept off the ground. He also knew he didn’t want to start a company with his closest friends, in case the whole idea went south.

A few inquiries around campus led him to settle on fellow students Jason Bellet and Tyler Crouch. Together the three founded Eko Devices, and in short order they designed and presented their first prototype. It was an instant flop.

“When we first started the company, we started out with a whole new concept that looked totally different from a conventional stethoscope,” says Landgraf. “We found that physicians still loved their stethoscopes. They buy them in medical school and keep them their entire lives.”

After returning back to the drawing board, Landgraf and his partners realized that the ideal solution would be a device that attaches to a stethoscope, enabling physicians to switch easily between conventional and digital modes.

The result was Eko Core, which just launched in the U.S. and received FDA approval in September. Eko Core electronically amplifies heartbeats and sounds from other internal organs, and transmits them wirelessly to a companion mobile app, where a doctor can view them in real time.

Eko Core also includes a web platform that seamlessly integrates the heartbeat recording into the patient’s online records. The heartbeat can be shared instantly with other medical practitioners in the same building, the next town, or halfway around the world.

With that in mind, Landgraf envisions a critical role for Eko Core in addressing health issues in underserved communities around the world.

“In Haiti, for example, screening for rheumatic heart disease is not done by specialists,” he explains. “The screeners are seeing too many patients and overwhelming the specialists with referrals. If the heart sounds can be shared remotely with a specialist, they could look at two thousand cases a day.”

Landgraf and his co-founders are already busy working on next steps. A recent brainstorming session involved the three listening to heart sounds and realizing that they could be identified like individual songs.

They also realized that there is already an app for that: Shazam.

“With Shazam you can pick up a song in a crowded Starbucks, so why can’t you pick up a heartbeat?” says Landgraf.

The session concluded with an email pitch to Shazam, which proved to be irresistible. Shazam co-founders Chris Barton and Philip Inghelbrecht jumped on board, providing support for the forthcoming Shazam for Heartbeats.

“It adds a new level of complexity,” Landgraf explains. “Right now we have the hardware and some iPhone software [Android is on the way], but we have no analytics. Shazam for Heartbeats will build in analytics in real time.”

If all goes according to plan, Shazam for Heartbeats will enable clinicians to pinpoint and share heart murmurs and other abnormal sounds.

As for the step after that, back in 2012 medical industry observers began predicting that a Shazam-like device could be deployed by patients at home, to improve monitoring and reduce trips to the doctor’s office.

“Think of the power you can gain when you can share heart sounds over long distances,” concludes Landgraf.