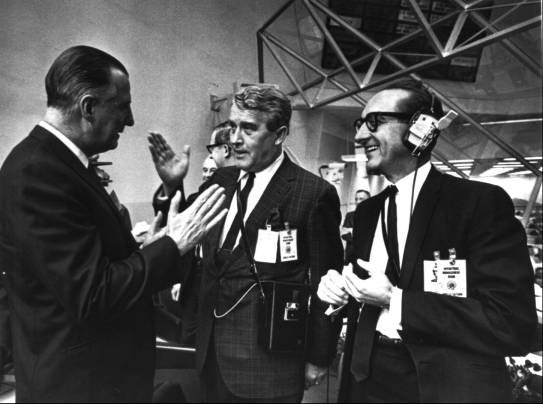 On October 12, George Mueller died of congestive heart failure at the age of 97. The NASA engineer’s ideas were instrumental in sending men to the moon in 1969. Instead of testing rockets one stage at a time, adding live stages with each successful flight, Mueller’s all-up method proposed to test all three live stages in the rocket’s first flight test, while it carried a real Apollo module as a payload. Though many thought his plan was reckless, the all-up method worked and helped the U.S. to beat the Soviet Union in a manned lunar landing.

In honor of Mueller’s memory, we turned to our archives.

Wernher von Braun quoted Mueller a number of times in his columns for Popular Science, for his expertise in manned space flight.

In March 1968, von Braun wrote about the success of the Saturn V-Apollo’s flight test using the all-up method for Popular Science:

You can read a 1969 article Mueller wrote for the New York Times about the manned lunar landing and his ambitions for the future here, and read his NASA oral history interviews done in 1998 and 1999 here.