How to speed up your sled with scientific tricks

Plunge downhill as fast as you can. 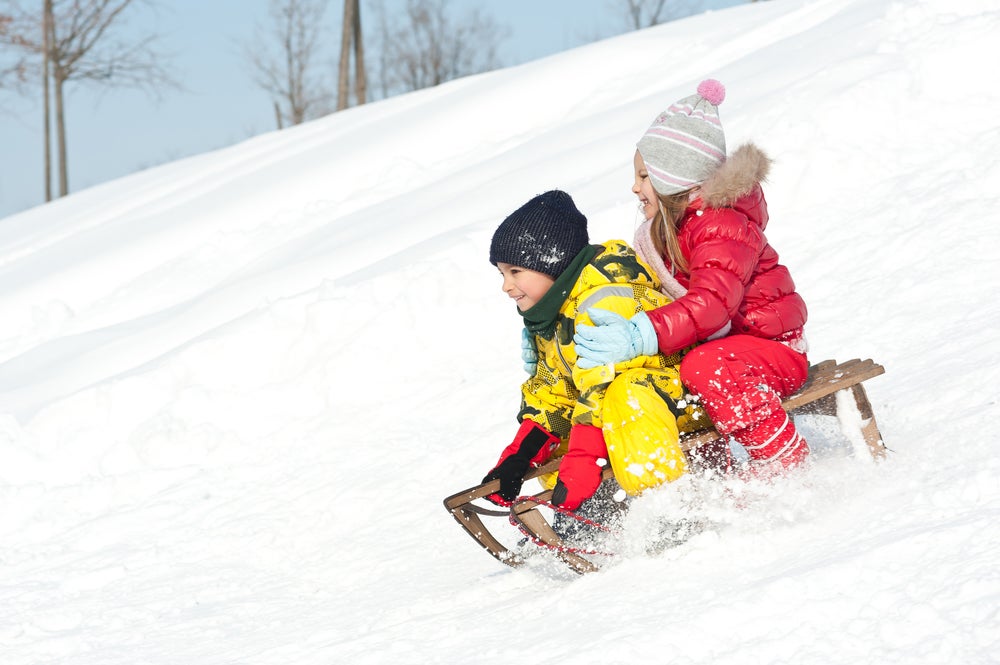 The best way to spend a snowy day. pio3 via Depositphotos
SHARE

Professional luge, bobsled, and skeleton athletes can whiz down Winter Olympics runs at eye-watering speeds—faster than 70 miles per hour. While you won’t reach the same death-defying pace with an average toboggan on a local snow-covered hill, you can still accelerate your plunge. Choose a good slope, then follow these scientific tips to speed up your sled.

Crashing at high speeds can cause injury and death: Between 1997 and 2007, sledding accidents sent an average of 20,820 children per year to U.S. emergency rooms. If you’re going to experiment with high-speed sledding, then avoid locations that put riders at risk of colliding with obstacles or sliding into the road. Exercise caution, try to avoid crashing, and stay safe. You can find more safety tips here.

Prep the surface of the snow

The state of the snow you’re sledding on can have a major effect on your speed. A thick, fluffy blanket, for example, will drag more on the bottom of your sled, increasing friction and slowing you down. Ice, on the other hand, will give you a slicker, speedier surface.

Although there’s only so much you can do to control the snow quality, you can improve the ground conditions by adding ice. However, proceed with caution: Sledding falls that take place on ice put you at greater risk of injury.

To start, ride a flat-bottomed sled down the hill, then coast along that path a few more times to pack down the snow. If you’re feeling ambitious, you can also widen the track with a couple more runs. Once you have a decent trail, you can ice it up. If temperatures are below freezing, fill a spray bottle and spritz this track with liquid water. (If conditions are warmer than 32°F, then spray the track before you go home for the day, leaving it to cool down when temperatures drop overnight.) In particularly cold conditions, you can try dousing the path with a garden hose or buckets of water, but if you dump too much liquid at once, you run the risk of melting the snow. When the water freezes, you’ll have an icy course that should allow your sled to slide down the hill at a much faster pace.

Picture a traditional sled, and your brain will probably conjure up a wooden contraption on runners. But that classic style is quite heavy, and without a thick, hard-packed layer of snow, it’s more likely to sink into the fluff than to speed over it. A modern design will serve you better. Pick a flat-bottomed sled made of hard plastic or foam, or an air-filled inner tube.

Of those two, if you have a need for speed, you should grab an inner tube. And there’s science to back that up. In one 2009 study, researchers used radar guns to measure 145 sledding runs. They found that inner tubes averaged 20.3 miles per hour—around 2 mph faster than the plastic sleds.

Although the icy trail we discussed earlier will reduce the friction between your sled and the ground, some online guides suggest that you can boost your speed even more by making the bottom of your vehicle slicker: Spray it with cooking oil, which rubs off relatively quickly, or rub it with ski wax, which lasts longer. There’s no harm in trying this method, but it may not have a huge impact on your speed.

“When we’ve experimented with it, it hasn’t seemed to make that big of a difference in speed or distance,” says Darren Bagley, a 4H youth development educator at Michigan State University Extension. Bagley sees sledding as an opportunity to teach kids about science, encouraging his students to vary their techniques and use trial and error to increase both pace and distance traveled. However, Bagley adds, just because he didn’t observe any results doesn’t mean that these lubricants are ineffective. Other factors could be at work: “Maybe our sledding hill wasn’t tall enough for that effect to be realized,” he says.

Once you’ve set up your terrain and prepped your vehicle, there’s still one thing that can affect your total speed: what you do on the hill. As an obvious example, a running start will launch you more quickly than a push. However, this can be difficult to pull off, especially if multiple people are trying to squeeze into one vehicle.

Speaking of those extra passengers, their weight will boost your speed—at least, up to a point. “The more kids you get in a sled, the faster it goes,” says Bagley, but “there does seem to be a tipping point.” If you’re in a long, flat-bottomed sled, try adding a passenger or two; however, inner tubes won’t safely accommodate more than one person.

That doesn’t mean you can’t boost an inner tube’s speed. To add weight, just link arms with another rider—but don’t try to join too many tubes together. Bagley’s students have experimented with connecting more than two inner tubes, he says, but this actually slowed them down instead of increasing the pace. He thinks that, when it comes to a whole flotilla of inner tubes, extra drag could be counteracting the extra weight.

When you’re deciding whether a running start will be worth the trouble, consider another factor: the position you’ll take while going down the hill. There’s a reason that Olympic sledders lie down—if you sit or stand up straight, you create wind resistance that can slow you down. Lying flat will make your sled more aerodynamic, and thus faster, but this position is harder to reach from a running start. That’s particularly true if you prefer to go feet-first (which we recommend, because a head-first run will generally result in a face full of snow).

With so many factors affecting a sled’s speed, the only way to really reach your full potential is to experiment with different conditions. That makes sledding a great opportunity to teach young riders about the scientific method. As Bagley says, “Science is everywhere.”

This article was originally published on February 12, 2018. It has been updated.