It's as easy as ABCQ. 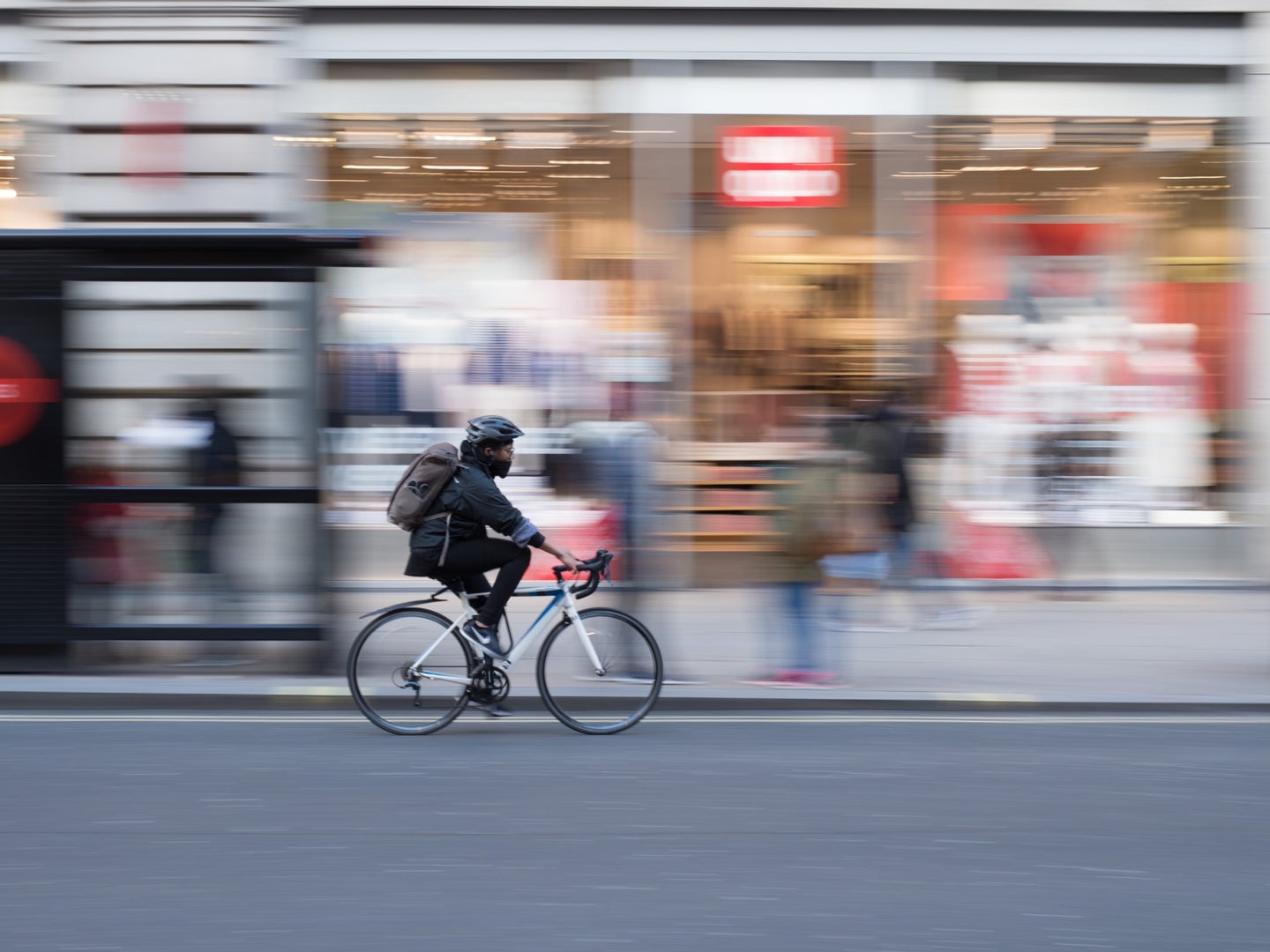 If you're someone who just started cycling, you'll want to know how to keep your bike in tip-top shape. Roman Koester/Unsplash
SHARE

Even the most inexperienced cyclists know you can’t ride a bike with two flat tires, no brakes, a janky chain, and pieces that are a bump or two away from scattering across the pavement. If you’re not taking care of your ride, you risk disappointment and disaster every time you hop on the saddle.

Don’t worry if you’re not an expert mechanic—there are basic steps you can take before each trip that will ensure smooth cycling wherever you are. Not every component is high-maintenance—some parts only need attention after you’ve logged long miles. And at the end of every year with your trusty two-wheeler, it’s worth considering a checkup from a professional.

A quick check of key components (air, brakes, chain, and quick-release elements) can take less than a minute if everything’s in working order, and if something’s not up to snuff, you’ll thank yourself for catching it before you take a tumble on the road or trail.

Somewhere on the side of each tire, along the rim, there should be numbers indicating the proper air pressure for your bike. Use a standalone air gauge or a tire pump with one built in to see if your inner tubes are properly inflated. If not, pump them up. “Flats are more prevalent when you have soft tires,” says Christopher Zane, founder of Zane’s Cycles in Branford, Connecticut. “If you keep your tires hard, you pretty much have no liability.” A lower chance of a flat means it’s less likely you’ll have to make the long walk home or call someone to pick you up.

Once the pressure is right and your air valve caps are back on, give your tires a squeeze. Really get a good feel for how much they compress under your pinchy little fingers. With experience, you’ll understand what the proper amount of air feels like and you won’t always have to use a gauge, according to Binky Brown, founder of Hard Knox Bikes in Oakland, California.

It’s generally fine to keep your inner tubes within 10 percent (over or under) of the numbers on your tires, but you do want to make sure they’re always within those parameters, Zane says. If your tire is over- or under-inflated, you risk punctures that can’t be easily fixed.

Too much air, and the tube can burst, ripping apart like a popped balloon. If there’s not enough, your bike may suffer a “snakebite”—two holes formed when the tube gets pinched between the rim and another object, like a curb.

This is also a good time to make sure your tires rotate correctly. Lift each one off the ground and give it a good spin. If it touches your brake pads or any other part of the bike, it’s not straight and you may need to take it to a mechanic. The problem could be something as simple as a broken spoke, or your whole wheel could be bent out of shape. Bike shops have dedicated devices to return rims to true.

Now that your tires are ready to roll, check your brakes. Pull the levers as you normally would when stopping, and make sure they don’t touch the handlebars. If they do, your brakes aren’t tight enough and you won’t stop as quickly as you’d like.

Even if they seem to be in proper working order, you should still test each one individually, Brown says. She suggests activating the front brake while tilting your bike so the back wheel comes off the ground. Then, try to push it forward. If the brakes work, it shouldn’t move. Do the same test with the back brakes by lifting the front wheel up and trying to pull the bike backward.

Your bike won’t go anywhere if your chain doesn’t work (unless you’re only traveling downhill), so you’ll want to ensure it’s clean and moves smoothly as you rotate the pedals. As you do so, make sure the chain is properly lubricated and has some flexibility, Zane says. If it looks dry, it probably is, but you can touch it to be sure.

Bicycle chain lube is the best stuff for the job, because it’s built for it. Standard WD-40, while acceptable in a pinch, is too thin and light to work well for a long time, Zane says. If you’re unsure what kind of lube to buy, he recommends asking your local bike shop—they’ll usually sell you what works well for them. Other, more general lubricants, may also work.

Apply it to the chain, making sure it gets into the inner workings, then wipe it up. A good method is to hold a rag in your hand, close it around the chain, and move the pedals backward so the chain goes through the rag and any excess lubrication comes off, Zane says.

Don’t use too much, though, as doing so can make things worse by binding all the grease and dirt that accumulates as you ride, Brown warns.

You may have heard the air-brakes-chain pre-ride inspection referred to as remembering your “ABCs,” but Brown says she takes it one non-sequential letter further and encourages people to conduct an “ABCQ” check. The add-on refers to any quick-release parts your bike may have, such as axles or seat posts. These easy-to-turn levers don’t require a tool to tighten or loosen so you can make adjustments during a quick stop along the way.

If these pieces are loose, they can be a huge safety issue—imagine your wheel coming loose or your seat suddenly dropping as you ride. Before you leave, make sure all quick-release levers are pressed against the frame, and fix any that aren’t. If they’re loose, Brown suggests tightening the smaller, non-lever end to avoid over-tightening and to only use the lever to close the release.

As long as you’re consistently keeping an eye on your ABCQ factors before each ride, you shouldn’t need to tune up your bike more than once every six months, Brown says. But that doesn’t mean you should tune out while you ride. Pay attention to how your bike performs each time you take it out, and if something seems off, give it a closer look.

The more you ride, the more often you should check to ensure everything is in working order, and you should also learn how the trips you take affect your bike. If you’re going down hills a lot each day or stopping frequently in traffic, your brakes may wear out more quickly, and if you’re biking by the ocean, salt can take a toll, Brown says.

You should occasionally check for dings, cracks, and other structural damage, especially under the bike where debris from the road or trail hits it, Brown says. It’s also a good idea to give your ride a cloth wipe-down once in a while, completely clean it every few months if you use it often, and to check the tightness of every bolt when you can.

Check your seat height once in a while, too. It should stay where it is once it’s set, but you can test its location by sitting on the saddle and placing the ball of one foot on a pedal in the six-o’clock position. There should be a slight bend in your leg. If your seat’s too low, you’ll be working harder, Zane says.

If you’ve left your bike locked in public for a while, you should give it a quick once-over, paying special attention to the quick-release components, Brown says. Ideally, your bike should be exactly as you left it, but it’s possible someone else locked their bike up nearby and knocked something loose. Worse, your bike may be damaged or the victim of an attempted theft that has rendered it unsafe.

“I’ve had people come to my bike and try to steal it,” Brown says. “They couldn’t, but they didn’t put the parts back.”

Both Zane and Brown said riders should have a mechanic look at their bike annually. In a perfect world, you’d want to get a complete overhaul every year, Brown says. An overhaul is more than a basic tuneup, and when it’s done, your ride will feel completely different—more fresh. If you can’t afford that, regular tune ups are fine until you can completely fix individual problems, she says.

Zane also acknowledged that people may struggle to bring their bikes into the shop for regular maintenance. He said his company offers free service for the life of any bike a customer buys there, which encourages them to bring them in more frequently.

A full overhaul is, of course, something you could attempt on your own if you have the skills, but for most people, it’s much more worthwhile for a professional to do the job. “Somebody who understands the mechanics behind how things work can certainly assess the issues,” Zane says. “But we can do things in the shop that even somebody with that understanding might not be able to do perfectly.”