Simple tricks for freeing up storage space on your phone

Behind every good selfie, there are 50 failed attempts, but you don't need them all on your phone. 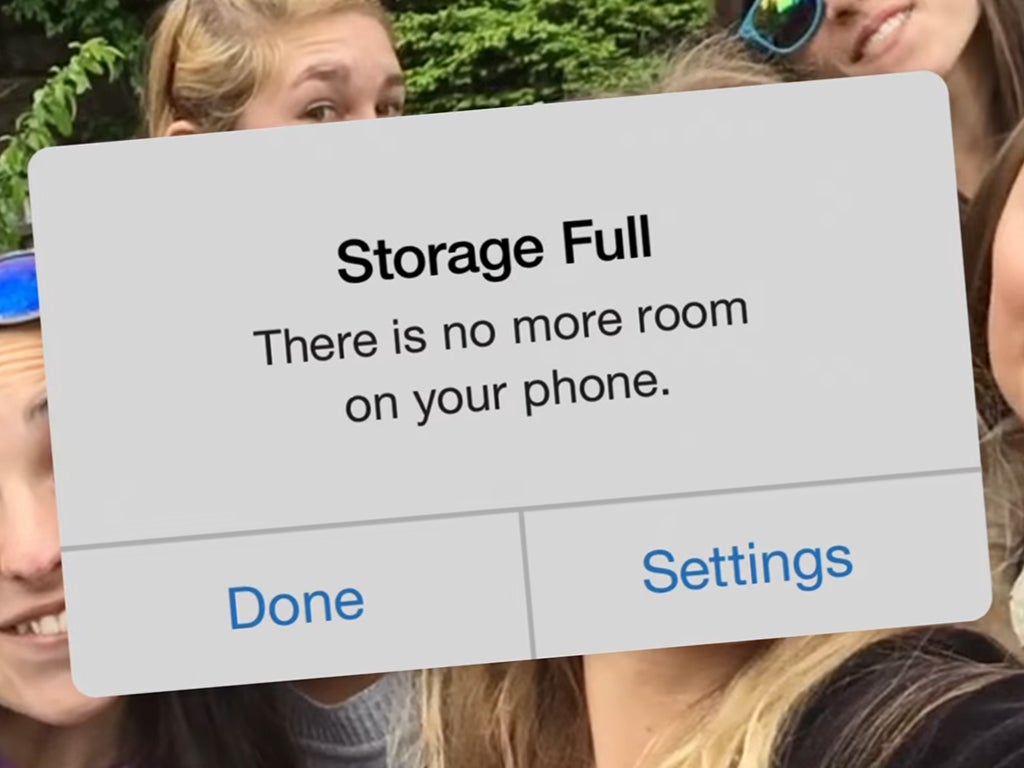 This story has been updated. It was originally published on December 11, 2020.

You pull out your phone to snap a spontaneous photo… but get an error message because you have no space for the pic. Running out of room on your phone can be a disaster, but it’s totally avoidable.

And listen: We’re not here to judge you for filling your phone—it could happen to any one of us. While the best way to free up space on your phone is to maintain your storage as you go, it’s relatively easy to clear out the junk when it’s past the point of no return.

Move your photos and videos to the cloud

Photos and videos can take up a huge chunk of the space on your device, so it’s a good idea to get these files offloaded to the cloud at the earliest opportunity. The good news is that plenty of apps will do the job for you. The not-so-good news is that if you have too many images, you’ll probably have to pay a few dollars a month to store them.

One of the best options is Google Photos. It works across Android, iOS, Windows, macOS, and the web, and it lets you store up to 15GB of photos and videos for free. But that’s only if your Google Drive and your Gmail accounts are empty, as the space you use with Google Photos counts toward that storage.

In the past, Google Photos users had unlimited cloud space for their photos as long as they agreed to resize their images down to a maximum of 16 megapixels and movies to 1080p full HD (so no 4K). In 2020, Google announced the end to this sweet deal, which meant that any new files would count against the 15GB of space the company grants to its free-tier users.

The good news is that this change only applies to new photos and videos, so if you’ve been using Google Photos since before June 1, 2021, anything you stored in the cloud before then is living there for free. Nice.

If you want more space, you’ll have to pay for the Google One service, which starts at $20 a year for an additional 100GB.

Other paid options include Apple’s iCloud (which will not work on an Android phone), Microsoft’s OneDrive, Amazon Photos, and Dropbox. They’ll all hang onto your mobile pictures for a few dollars a month. The iCloud and Dropbox tiers are similar, at about $10 a month for 2TB of online space, but you’ll have to check the individual sites for more details. Amazon Photos is a bit of an outlier, as unlimited, full-resolution photo storage comes bundled with an Amazon Prime subscription ($139 a year or $15 a month). And if you’re looking at OneDrive, you won’t be able to get more than 100GB of space without subscribing to Microsoft 365 ($70 a year or $7 a month).

Whichever option you go for, your app of choice will automatically take care of uploading your photos and videos. You can then delete the local copies—some apps, like Google Photos and iCloud, will even take care of this for you—which will open up extra storage on your phone. For more details, check out our complete guide to cloud-based photo backups.

Cut down on apps and games

The next-biggest space hog, after photos and videos, will likely be your apps and games. To avoid completely running out of room, regularly remove apps you’ve not using. You can always re-install them without paying a second time—Apple or Google will keep track of what you’ve already paid for.

But not all apps are equally greedy space-wise. To see which ones are taking up the most room, iOS users can go to Settings, then General, then iPhone Storage. On Android, open Settings, then Storage, then tap Free up space.

You can then delete the worst offenders. On iOS, press and hold on an app icon until a dialog box appears, then hit Remove App. On Android, press and hold on an icon in the app drawer, then drag it up to the Uninstall link at the top. On Google’s OS, you can also use the Free up space feature to remove apps you haven’t opened in a while. Just tap Select files under Delete unused apps, and choose the ones you can do without—the heftier tools will be at the top of the list.

On top of the room that apps themselves take up, many also store data—primarily content such as music, podcasts, movies, and TV shows that you might have saved locally for offline use. Whatever apps you use, they should include options for clearing out locally stored files so you can free up some space, though the process will vary from app to app. In Netflix, for example, just tap the Downloads button at the bottom of your screen to manage the titles you’ve saved to your device.

[Related: Hack Netflix with these add-ons and tricks]

Other apps—like Facebook, messaging apps, and browsers—will also store data, but not in significant amounts. So it’s not as important to keep tabs on how much space they’re using up. As we mentioned above, the apps list inside your phone’s settings is a good place to check, and you can always completely uninstall bulky apps.

The previous tips will help you clear out files on your phone. But if you want to keep those files for easy offline access, you’re going to need more storage capacity. Sure, we could tell you to buy a phone that has more than enough storage on board—the iPhone goes up to a whopping 1TB these days—but space comes at a high price and not everyone has that kind of money. Besides, if you’ve already bought the phone you plan to use for the next few years, you’re not going to toss it and buy a new one just because you’re running out of space.

For Android users, there’s another option. Many phones with this OS come with a microSD card slot, which is a quick and easy way of getting more elbow room for your files and apps. By inserting this card, you can add up to 1TB of extra space and 512GB for a little more than $50. Before you purchase, however, double-check that the card will work with your phone.

How your Android phone “sees” the card will vary depending on which manufacturer made your phone and which version of Android you’re running. Some phones let you run apps on the card, while others will only allow you to store photos and videos, and documents such as PDFs on the extra storage. Even if it’s the latter, moving those files will automatically free up room in your phone’s internal memory.

Apple’s iPhones don’t feature expandable internal memory, but you can buy extra peripherals, like the SanDisk iXpand, to boost the available storage. These dongles are effectively automatic backup solutions that pull photos and videos off your device so you can delete the originals. They can be useful, but you’re not actually expanding the available space on your phone like you are with an Android’s extra memory card.

No space-saving trick works better on your smartphone than running it through a factory reset every now and again. This effectively returns your handset to the state it was in when you first bought it—which means absolutely nothing will remain on there beyond what the manufacturer and Apple or Google preinstalled.

[Related: How to reset your devices without losing everything]

What puts most people off running through this process is that it wipes your photos, videos, messages, apps, and everything else off your phone—so you’ll need to start from scratch. This means that, before you get started, you need to be absolutely sure that you backed up everything important.

That said, with today’s cloud-first apps and services, resetting a phone isn’t quite the scorched-earth approach it used to be. If all your emails are in Gmail, your songs are in Spotify, your pictures are in Google Photos, and you’ve backed up and downloaded all your messages, the process can be relatively painless. Count this as yet another reason to switch to these cloud-based services for the future.

If you’ve double-checked that you’ve got copies of everything you want to keep, you can find the reset options in your Settings app. It’s under General and RTransfer or Reset iPhone on iOS, and System, Reset options on Android. Follow the instructions on screen and you’ll soon be back to the beginning as far as your phone and its operating system are concerned. And next time, you’ll know how to be more careful with your phone’s storage space.