How SciShow Explains The Science Of The World Around Us

Not all learning happens in a classroom 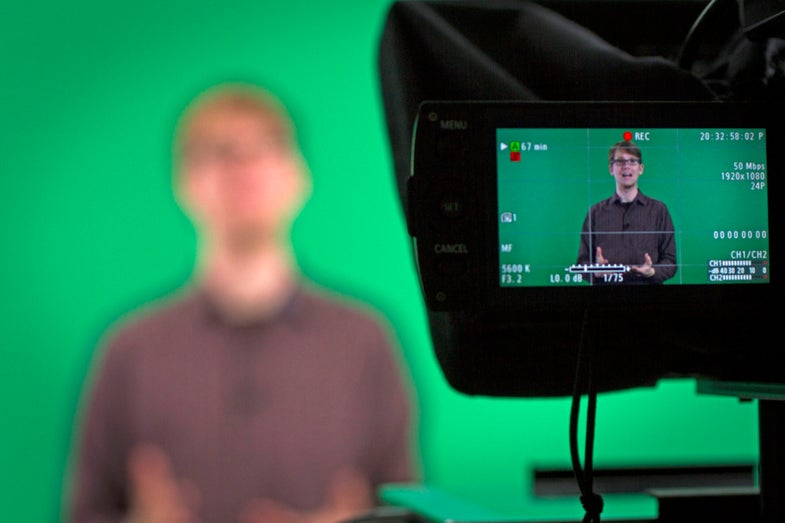 By 2012, Hank Green had already been creating content on the VlogBrothers YouTube channel for five years, but he wanted to do more. Among the most popular videos he and his brother John have made are educational explainers, but creating those takes significantly more time than a normal video, due to the need for research and fact-checking. “You need to try harder to make sure stuff is right in an educational video than when you’re making a funny video,” Hank tells Popular Science. But despite being more resource-intensive to produce, they continued to make these videos because “We felt like it was good for the world.”

So that year, the Greens applied for and received a grant to create several new channels as part of YouTube’s Original Channel Initiative. One of the ideas they came up with was SciShow, a YouTube channel with the express purpose of educating the public about the science of the world around them. “For SciShow, we’re just excited about understanding people, understanding the world, understanding the universe, and that is the mission,” according to Green. And that mission is working—SciShow has nearly 3.7 million subscribers and its more than 1,000 videos have been viewed over 505 million times to date.

Ideas for SciShow’s videos come from one of three places, according to Editor-in-Chief Blake de Pastino: viewer questions left as comments on past videos, ideas from staff members in pitch meetings, or “from my butt”—questions that come up in de Pastino’s daily life, i.e. ‘Why does one need to tilt a glass while pouring a beer?’ The answer to that particular question has more to do with science than with the beer itself, but de Pastino explains, “what we’re doing is using people’s natural interest in beer to teach them about this one principle of fluid dynamics.” He sends those ideas he comes up with to Alyssa Lerner and Ceri Riley, the two women who run SciShow’s day-to-day operations, to do preliminary research and/or assign the idea to be outlined and written by one of about 20 freelancers who write for SciShow.

As video ideas are pitched, no matter the source, the staff considers how many principles must be explained to fully express the idea. The most interesting pitches, and therefore the most interesting videos, come about when the answer is counter-intuitive. De Pastino believes that’s especially true in science, because, “there are a lot of things out there that people either don’t know or think they know and is commonly misunderstood.” Rarely, he says, does an idea come up that the staff thinks is too difficult to convert into a video. Rather, if there are too many principles that need to be explained within a video (the more concepts that need to be explained, the longer a video will be), the staff will break the idea up into chunks and explain each principle individually.

SciShow and its spin-offs, SciShow Space and SciShow Kids, produce several different types of videos, and production for each of these takes different amounts of time. De Pastino estimates that it takes about a month on average between the time a script is assigned and when its filmed. However, scripts for the weekly segment “SciShow News” and “Space News” are written on Monday, filmed on Tuesday, and uploaded on Friday.

SciShow also does longer videos that dive deeper into subjects. Green has a particular affinity for one deep dive episode, “The Science of Anti-Vaccination,” which has been viewed over one million times. The episode is not actually about the effects of vaccination, but rather the psychology of the anti-vaxxer mindset and trying to understand the phenomenon. The reason he enjoys that episode so much is, “because it was an opportunity to frame that conversation in a scientific way,” He continued, “Instead of in a culture war way, where we’re like, ‘Here we are being angry at each other,’ we can be like, ‘Well how do we use science to help understand each other?’ and maybe use those sets of tools to heal that wound a little bit.'”

In this age of viral internet trends though, not every story can be worked on for weeks or comes with an embargo that gives science communicators time to prepare—sometimes a story or trend will take the world by storm, like “The Dress” did in early 2015. “We were all obsessing over it and fighting over what colors we saw, so we were like ‘Well, we have to do it,’” says Caitlin Hofmeister, SciShow’s producer. “Luckily that caught on first thing in the morning and we were able to write a script and shoot and edit it.”

While one editor will normally “carry” a video through the end of post-production, as Hofmeister puts it, multiple staff members may work on individual components simultaneously in such a case in order to get a time-sensitive episode up quickly. “We’re not worried about being the first to report on the gold and blue dress,” she continued, “but we know our audiences wants to know what we think about it so we’ll do a video.”

As with any creator on the internet, SciShow deals with its own set of “trolls,” internet users who express (or feign) outrage against content. Science can be particularly prone to this, between particularly vocal anti-vaxxers, the flat Earth society, those who don’t believe in climate change, and members of several other movements. According to Green, the best way for creators to protect their audiences from trolls, “is to try and create content for people who are a little more thoughtful and to try to not make content for people who aren’t.” While he acknowledges it isn’t the best solution, and can even allow trolls to find each other and create their own communities, he simply states, “you gotta do what you gotta do to protect your community.”

Green has seen many changes in the online video landscape during his tenure, the latest of which is the rise of Facebook as a video platform. He says both the viewer and creator experiences are very different on the social network than on YouTube. “Facebook content tends to be much more like a lighter touch,” he explains. “It’s the kind of content you can pop in and out of without any trouble. Whereas, YouTube, it seems like people are there to spend time watching video and they’re happy to spend five, 10, 15 [minutes], even an hour-long session on SciShow videos, which is much better for us.” He also says that there are SciShow viewers who only watch on Facebook, that hasn’t resulted in a dip in viewer numbers on YouTube.

While some episodes of SciShow are natively uploaded to Facebook, don’t expect to see much original SciShow content made for the social network. In October 2015, Facebook announced it was testing a “video matching technology,” similar to YouTube’s ContentID, which would allow creators to report a duplicate of their video uploaded to the social network. That feature, which Facebook calls “Rights Manager,” launched in April. Unlike ContentID though, Rights Manager doesn’t ensure that the creators of videos are paid for the views of their videos. In fact, Facebook doesn’t monetize the majority of the videos being uploaded to the social network (It was reported in June that Facebook does pay some media companies, including Buzzfeed and The New York Times, to produce videos). Until a revenue model is in place, SciShow won’t prioritize Facebook as a platform. “At the moment, it’s not a high-strategic priority for us to be growing on Facebook,” Green says, “because it seems like it’s really good for Facebook and not for creators.”