Solar Race Team Gets Help from a Superforecast 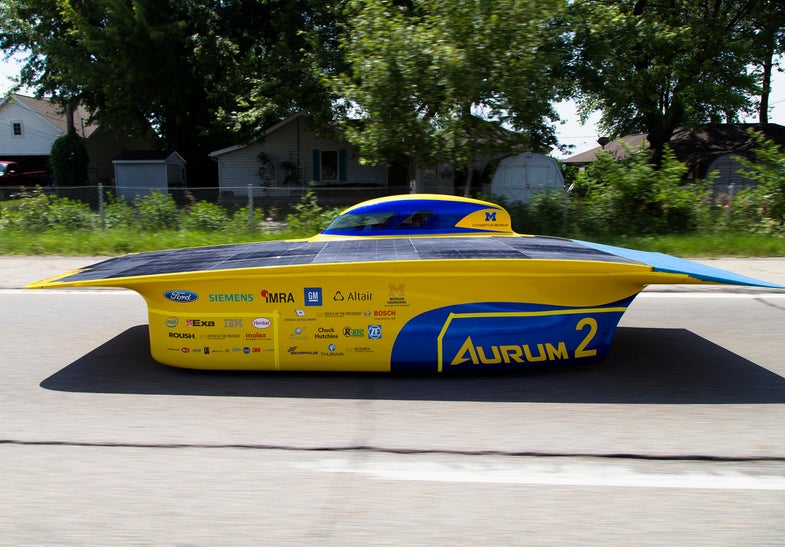 The Bridgestone World Solar Challenge turns 25 this week, when 50 race teams head across the Australian outback for 1800 miles in solar cars of their own designs beginning October 28. The University of Michigan team has been solar racing for as long as this event has been held, and this year, they’re getting a bit of a boost from IBM’s “superforecast” system.

Hendrik Hamann, a physical analytics manager at IBM, says the system uses historical weather records and machine learning plus real-time sensors on the vehicle – which is named Aurum, by the way – to create the most accurate forecast of sunny conditions, which power the car.

The precise forecasts allow the UM team to make decisions for power management. If the skies are clear late in the afternoon and predicted to be clear again in the morning, maybe they’ll push a little harder. If clouds are settling in, they might drive more conservatively. And as with any race, there’s strategy to consider. “If they’re in fourth place and they want to win, they may want to consider taking a larger risk,” Hamann says. “We have seen cases in tests where we clearly know if the team had continued to drive a little longer, there would have been more sun and a better charge at the end of the day.”

The forecasting is all done at IBM, where records of sun, wind, and temperature – which all affect battery charging – in the outback in previous years are used to train a model to improve the forecast for the team. The sensors on the cars give real-time data to the IBM team to integrate with the historical data.

But why use sensors? Why not just tell the team to, say, look out the Aurum’s window? “A sensor will be more reliable,” Hamann says. “It can take consecutive images and use analytics to understand how fast the clouds are moving. It’s better than someone looking out of the window and gives a more accurate forecast.” He also points out that cell phone coverage in the outback is not so great, so the team moves data from the vehicle to IBM via a satellite link.

This ability to forecast with solar power production in mind has possibilities beyond racing. It could be useful in the future for power management with stationary solar panels on buildings. “Combining big-data technology and very traditional science advances the state of the art of something as established as forecasting,” says Hamann.