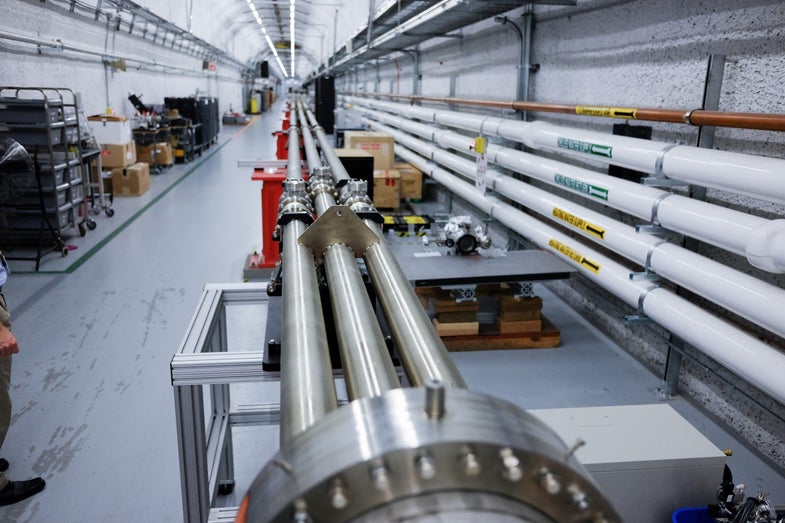 The X-Ray laser is split into parallel tubing to be distributed to the Far Experimental Hall. Dave Gershgorn
SHARE

Stanford’s SLAC National Accelerator Laboratory is home to the world’s largest and brightest X-ray laser, the Linac Coherent Light Source (LCLS). It’s been operating since April 2009, and is in the midst of a billion-dollar upgrade that will add two new X-ray laser beams that function 8,000 times faster and 10,000 times brighter.

The entire system spans two miles—that space is used to hurl electrons down a tube and through a gauntlet of magnets, called undulators. When the electrons pass through the undulators, they’re rapidly pulled back and forth. As they wiggle, they emit X-Rays. The electrons synchronize their motion as they pass through the array of magnets, causing the X-Ray light to synchronize as well. When that light is stably travelling together, or “coherent,” the electrons are removed and the light is split over six different research stations.

With this technology, Stanford is able to study the nanoscale workings of the natural world by making quick, stop-motion animations. They can study photosynthesis by looking at how individual molecules move, or replicate levels of heat matched only in the core of stars.

Here’s a look inside:

This article has been updated to reflect that the instruments pictured in the first two images are klystrons, not the tops of the undulators.