No more sleeping at the wheel. Hopefully. 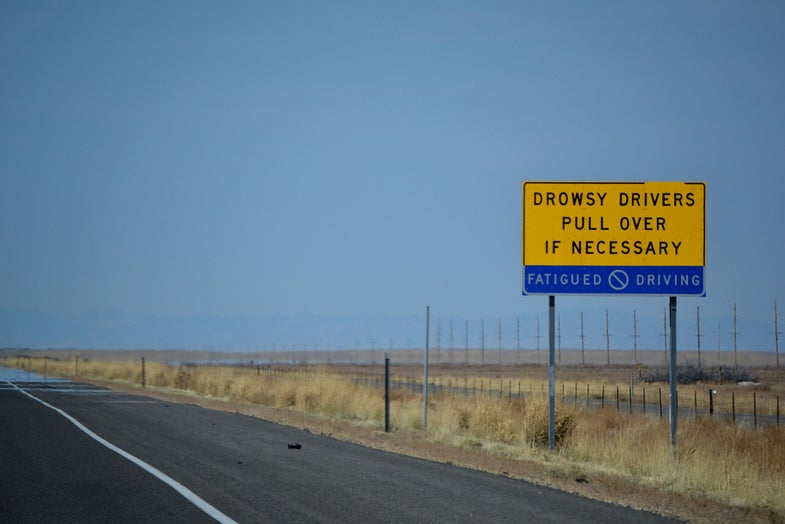 What if your car could sense when you were falling asleep behind the wheel, and wake you up before you caused an accident? That’s the notion around a sensor device being developed by Harken, a public-private European consortium.

According to Harken materials, the system’s sensors are smart textiles: “a combination of fibers and yarns with electrical properties” worked into the fabrics of the seat cover and shoulder safety belt. They monitor the driver’s heart and breathing rates from contact points along the driver’s back, butt, legs, thorax and abdomen, and can apparently sense changes in those rates that suggest the driver is nodding off.

“The rhythm of heart beats, specifically heart rate and heart rate variability, are good indicators of concentration and wakefulness,” notes a poster Harken presented at a Paris conference in April, “whereas the decrement of respiration rate has … proved to be correlated with increasing fatigue in monotonous driving such that slow and deep breathing can indicate a relaxed resting state.”

The project has gotten attention around the Internet this week thanks to a new press release announcing that the Harken system has “been tested by users in closed track tests, in order to prove its effectiveness under real-life conditions” and is moving into testing in “real traffic scenarios”, and from there to market. While this is aggravatingly short on detail, other information the project has put online suggests that it has succeeded at consistently filtering out “noise” like car vibrations from the sensor data, while still collecting the needed heart and respiration information.

Assuming that is true, it’s a notable accomplishment for a system that does not involve putting any sensors in direct contact with the user’s skin. It’s easy to imagine that in addition to reducing the annual carnage on American and European highways, this system could prove useful in reducing similar accidents in heavy industries like mining as well, or in remote health sensing. But how does the Harken system perk up a sleepy driver? One can imagine the possibilities. IEEE Spectrum notes that some luxury carmakers are already using sensors such as cameras to catch driver fatigue in time to stop accidents, so perhaps Harken is leaving it to the auto manufacturers to figure that out.