Solar Plane Passes Point Of No Return Over The Pacific

There's no going back now 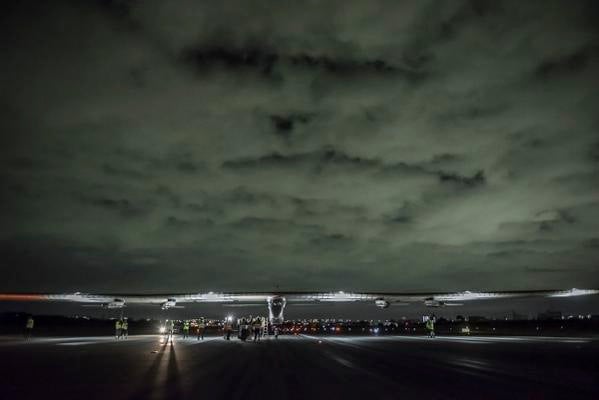 The Solar Impulse 2 is finally on its way from Japan to Hawaii. The third time seems to be the charm for this solar plane, after its first two attempts to make this perilous flight were called off due to bad weather. Now, with the pilot nearly finished with his first day of flying over the Pacific, there’s no choice but to continue to Hawaii.

This eighth leg of the solar plane’s round-the-world trip is the most dangerous–it’s been called the ‘Earhart Leg’ after Amelia Earhart, who vanished on a similar route. The pilot, Andre Borschberg will spend five days in the plane’s tiny cockpit, only able to sleep for 20 minutes at a time.

The entire journey started on March 9, when the plane took off from Abu Dhabi. The team hopes to land there again later this year, after completing 13 legs of the journey, including another five-day stretch over the Atlantic Ocean. Borschberg and the other pilot, Bertrand Piccard not only hope to show that it is possible to fly in a plane powered only by sunlight, but to encourage and inspire people to look forward to an environmentally friendly future.

The plane is covered with 17,000 solar cells, which power the plane’s motors. The plane has a larger wingspan than a Boeing 747 but only weighs a little over 5,000 pounds, or about as much as a car. Most of that weight (4,579 lb) is taken up by a huge battery that gathers energy from the solar panels during the day and powers the plane at night, when the sun isn’t shining.

You can get live updates on the flight on the team’s website or watch a live broadcast of the flight on YouTube where you can listen to the pilot talk with the support team:

If all goes well, and the plane lands in Hawaii, it won’t be the first time the team has touched down on American soil. Two years ago, the first Solar Impulse airplane flew across the United States.