Where it's going, there probably aren't roads. 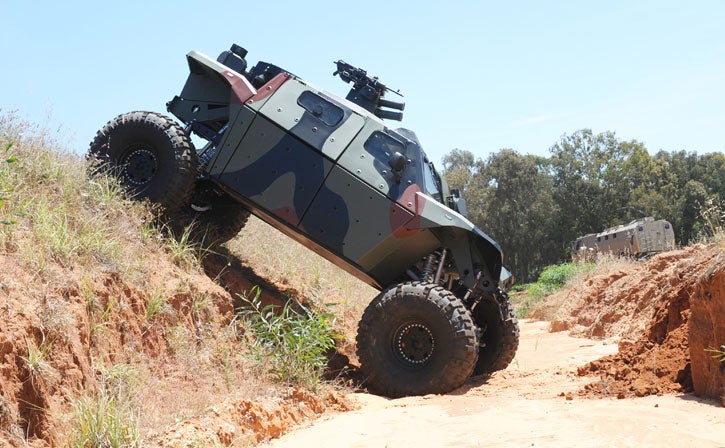 Half the battle is getting everybody to the battle. Shown off Friday at the Eurosatory defense conference and exhibition in Paris, the CombatGuard is a new military troop carrier that wants to bring more troops to battle over rougher, harder ground. It’s developed by Israel Military Industries in conjunction with Ido Off-Road Center, with the goal of a fast and armored vehicle that can get troops where they need to be over difficult terrain, and get them their safely.

In testing, the CombatGuard can go 95 mph on open roads, and 75 mph on rough terrain. Depending on how the vehicle is set up, it can carry either six or eight troops inside. The large tires, high clearance, and suspension allow it to drive on hills with up to a 70 percent gradient. It can operate as far as 300-500 miles away from base, getting troops where they need to be, in places they won’t be expected.

The body is protected against normal bullets at a reasonable range, and according to a brochure of the CombatGuard that protection includes armor-piercing bullets fired from rifles. Besides armor, the CombatGuard on display at Eurosatory came equipped with a Bright Arrow defense system. Sensors and camera detect incoming projectiles, and it will either jam laser targeting systems or shoot bullets at incoming rockets and tank rounds to protect the vehicle and the crew inside. Because the CombatGuard can go where most vehicles can’t, protection against the kinds of guns and rocket launchers people can carry makes it stronger than its go-kart-meets-monster-truck appearance suggests.