Brushing isn’t the only way to clean your teeth—here’s how oil pulling, charcoal, and other alternatives stack up

You might want to add some of them to your routine. 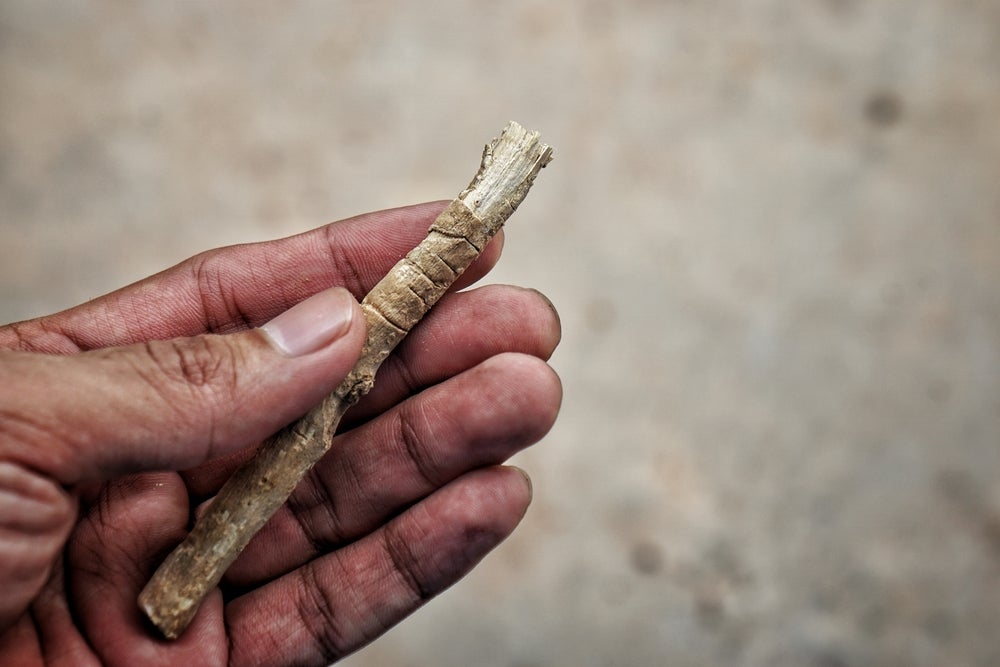 Many people in the Middle East, and some parts of South and Southeast Asia, use twigs from the arak tree (known as miswak) to clean their teeth. They fray the end of the twig, dampen the resulting bristles with water or rosewater and then rub the bristles against their teeth (see video below). The wood of the arak tree (Salvadora persica) has a high concentration of fluoride and other antimicrobial components that prevent tooth decay.

Twigs from other trees, especially aromatic trees that freshen the mouth, are used in different cultures. These so-called chew sticks have been in use for thousands of years. The first recorded use was in ancient Babylonia (3500 BC) but they were also used in China as far back as 1600 BC.

Using twigs can have similar cleaning effects as a conventional toothbrush, as shown in several studies. But the sticks can’t reach areas between the teeth, and if they aren’t used properly, they can damage the gums and abrade the teeth.

In some cultures, people rub various substances onto their teeth with their fingers. For example, in some Muslim countries, people rub walnut tree bark on their teeth. The bark of this tree has antimicrobial properties and is also believed to have a whitening effect. However, no studies have been conducted to investigate its effectiveness or side effects.

Some people in rural India, Africa, Southeast Asia, and South America use brick powder, mud, salt, or ash to clean their teeth. Although these ingredients effectively remove stains and plaque, they don’t contain fluoride and are often abrasive, resulting in sensitive teeth and receding gums.

Charcoal, which is also a traditional tooth cleaning powder, is making a bit of a comeback. Some modern toothpastes and toothbrushes now contain this ingredient, and evidence suggests that it can bind to harmful bacteria and inactivate them.

But not all natural products can be recommended. Betel quid and areca nuts—which are often used in Southeast Asia for tooth cleaning—stain the teeth and gums. And worse than that, they are associated with an increased risk of oral cancer.

Another tooth cleaning method that doesn’t involve toothpaste or a toothbrush is oil pulling, an ancient Ayurvedic practice. Here, a small amount of coconut, sesame, sunflower, or olive oil is swirled around the mouth for 15 minutes. This is believed to wash out bacteria and toxins. Oil pulling, when performed along with routine brushing and flossing, can help to reduce gum inflammation, according to recent studies.

Tooth decay and gum disease are among the most common diseases, with most of the world population affected, according to the World Health Organisation. With few exceptions, these diseases are preventable with ideal oral hygiene and a healthy diet. The high percentage of people suffering from these diseases suggests that most people’s oral hygiene methods are not up to the ideal standard and need to be improved.

Modern oral hygiene devices are specifically designed to clean even difficult to reach areas in the mouth and are highly effective, but only when done correctly. However, some alternative cleaning techniques, such as oil pulling, are useful additions.

Josefine Hirschfeld is an Academic Clinical Lecturer in Restorative Dentistry, University of Birmingham. This article was originally featured on The Conversation.