Buffalo Bills player Damar Hamlin underwent cardiac arrest during a game. Experts weigh in on the rarity of heart problems in impact sports. 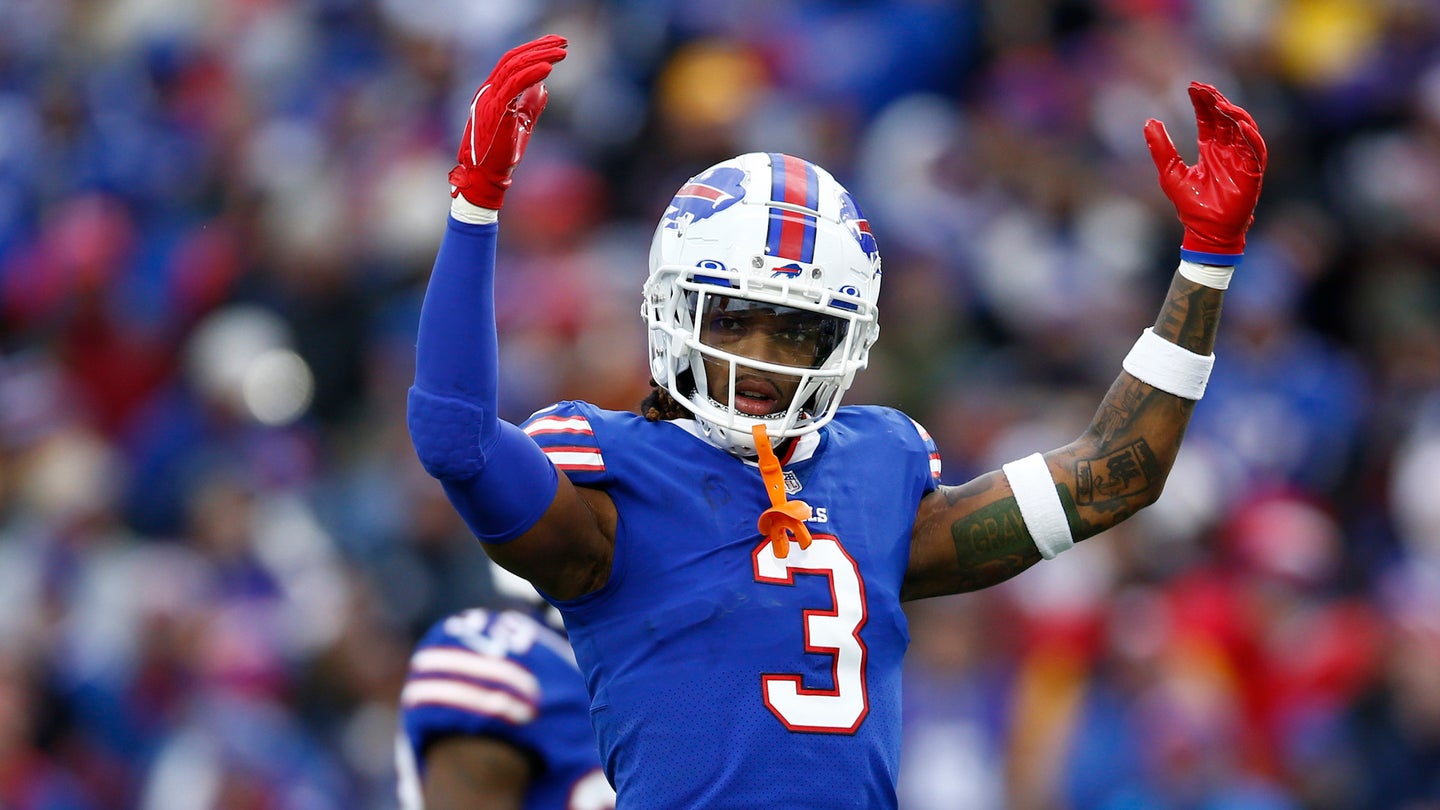 Damar Hamlin of the Buffalo Bills gestures towards the crowd during a match against the Minnesota Vikings on November 13, 2022. On January 2 in a game against the Cincinnati Bengals, Hamlin experienced cardiac arrest after a tackle. Isaiah Vazquez/Getty Images
SHARE

Buffalo Bills safety player Damar Hamlin collapsed on the field during Monday night’s football game versus the Cincinnati Bengals after a blow to the chest. Hamlin immediately became unresponsive, falling into cardiac arrest and prompting medical staff to start life-resuscitating measures. On Thursday, the Bills reported that the football star has woken up and is “neurologically intact.” Hamlin remains in critical condition and on a ventilator, but his doctors have said he can communicate via writing with his first words asking who won the game.

As of this reporting, there is no official diagnosis or explanation of what triggered Hamlin’s cardiac arrest. Hamlin’s condition has been called an “unprecedented situation” and something people haven’t “ever seen before” in the professional football community. It has not only shaken the National Football League (NFL) but has shone a light on having medical resources available to make sure contact sports are as safe as possible.

While there’s always a risk of injury during contact sports, medical research on football has often focused on head trauma such as concussions. Cardiac injuries, on the other hand, are less common. “Think about how many blows to the chest are delivered every week in hockey, lacrosse, basketball, and baseball with no lasting trauma,” says Hal Andrew Skopicki, the chief of cardiology at Stony Brook Medicine in New York who was watching the Bills and Bengals game live. One 2013 study on 107 cases of sudden cardiac arrest found only 20.5 percent of footballers survived and with a little more than half having an on-site defibrillator—a device that shocks the heart to restore a normal heartbeat. However, while these sports-related cardiac injuries are incredibly rare, they can be fatal, Skopicki cautions.

What happens to your heart during cardiac arrest?

Our hearts beat around 100,000 times a day to pump blood throughout the body, explains Skopicki. Hearts use electricity to create a heartbeat. A group of heart cells work together as a pacemaker to create electricity, which transmits through the heart and gets it to contract and relax. The group of heart cells are “like an on-off switch that shoots electricity in the heart which tells it when to squeeze,” explains Shephal Doshi, director of cardiac electrophysiology and pacing at Providence Saint John’s Health Center.

Cardiac arrest occurs when the heart’s electrical system malfunctions. A misconnection or over-connection, for instance, can short-circuit the electrical system and cause the heart to stop squeezing, meaning no blood is getting pumped out into the body, including the brain. Heart attacks, a common cause of sudden cardiac arrest, obstruct blood flow to the heart. The blockage deprives heart cells of oxygen, which affects their electrical impulses, resulting in an abnormal heart rhythm.

Muscle problems can also cause electrical instability. People who fall into this category often have a type of heart defect. Hypertrophic cardiomyopathy is one condition where the heart muscle thickens, causing scarring that may not allow the electrical system to function correctly. Dilated cardiomyopathy is another heart muscle disease where the left ventricle is stretched out, making it difficult for the organ to pump blood.

What do we know about Damar Hamlin’s collapse?

The Bills and medical officials have not disclosed Hamlin’s health history to the public, and it’s not known whether he has a preexisting condition that could have triggered cardiac arrest. However, professional athletes undergo rigorous screenings to detect health conditions like hypertrophic cardiomyopathy or a congenital heart defect ahead of time, says Liz Gardner, a sports medicine orthopedic surgeon for Yale Medicine. (The NFL is often selective when sharing player injury and health information with the public.)

Some medical experts have speculated that Hamlin’s collapse may have to do with a condition called commotio cordis. This is a rare situation where a strike to the chest occurs during a certain point in the heartbeat cycle. The heartbeat cycle consists of different electrical waves that mechanically stimulate the heart. The T wave is a vulnerable 20-millisecond interval when the heart rests before it begins the next beat. A blunt impact to the chest in this short time period can reset the heart inappropriately and change its rhythm, leading to cardiac arrest. Hamlin’s cardiac arrest “it’s most likely not a genetic abnormality or a weak heart, but really just a case of bad luck and unfortunate timing,” says Matthew Martinez, director of sports cardiology at Morristown Medical Center.

Commotio cordis could happen to anyone with a healthy heart. Because the condition is based on the timing of the blow to the chest, there are no screenings or medical tests to predict it. While the condition is often seen in athletes between the ages of 8 and 18, Martinez says it’s unlikely Hamlin’s age, 24, had anything to do with it. Commotio cordis can be life-threatening. Experts say the decisive factor is the time between when the heart stops beating and resuscitation. That timing also impacts the likelihood of long-term damage to organs, including the brain.

Skopicki says Hamlin fell backwards without trying to break his fall, which usually happens when the brain shuts off. “When you see a person go down like that, the thought immediately turns to whether or not the heart is pumping blood out to the brain,” he explains. “Your brain cells can only go about five minutes without oxygen.”

What are the chances of a full recovery from sudden cardiac arrest?

Sudden cardiac arrest has only happened a handful of times in the sports world. Danish soccer player Christian Eriksen experienced cardiac arrest during a Euro 2020 match against Finland. Eriksen made a full recovery and was later fitted with an implantable cardioverter defibrillator, a type of pacemaker that releases a small jolt to stabilize an irregular heart rhythm. He resumed playing 8 months later. Others have not been so lucky. St. Louis Blues defense player Jay Bouwmeester went into cardiac arrest and collapsed on the bench during a 2020 hockey game. He recovered three days later but had to retire from professional play. In a 2017 soccer match, former Dutch midfielder Abdelhak Nouri experienced cardiac arrest, which left him  in a coma for 13 months. He later woke up with permanent brain damage.

For Hamlin, there is some good news. Gardner told Popular Science the football star has the best chance for recovery, considering the rapid response of the medical team. Medical personnel took 10 seconds to reach Hamlin and started resuscitation, which went on for nine minutes. The athlete was also intubated by the time the ambulance arrived on the field.

“Not only was he in a setting where a defibrillator was immediately available, but CPR was provided right away.” Only 12 percent of people with cardiac arrest survive, although giving CPR can triple a person’s survival chances.

Without more details on his condition, it’s too soon to predict when Hamlin will walk out the hospital, much less play football again. Doshi says that considering the extent of the injury, it’s going to be a tough road to recovery and could be some time before he could be ready to play again on a competitive level. “But I’m sure many would agree that sports is secondary to being alive,” he says.

The incident is a grave reminder that football can be a dangerous sport that goes beyond entertainment. Gardner says it’s wonderful that the NFL had first responders who quickly rushed to the scene to perform CPR, but that’s not always the case with nonprofessional sports. High school football, for example, is one area where on-site medical care is virtually nonexistent. She says if high schools are slashing budgets, there’s a possibility that medical resources needed in case of cardiac events or concussions could be downsized. “If we are going to support and sponsor contact sports, there is a level of responsibility to do that safely.”