Without clear federal guidance, many families with little ones are stuck in a loop of COVID quarantines. 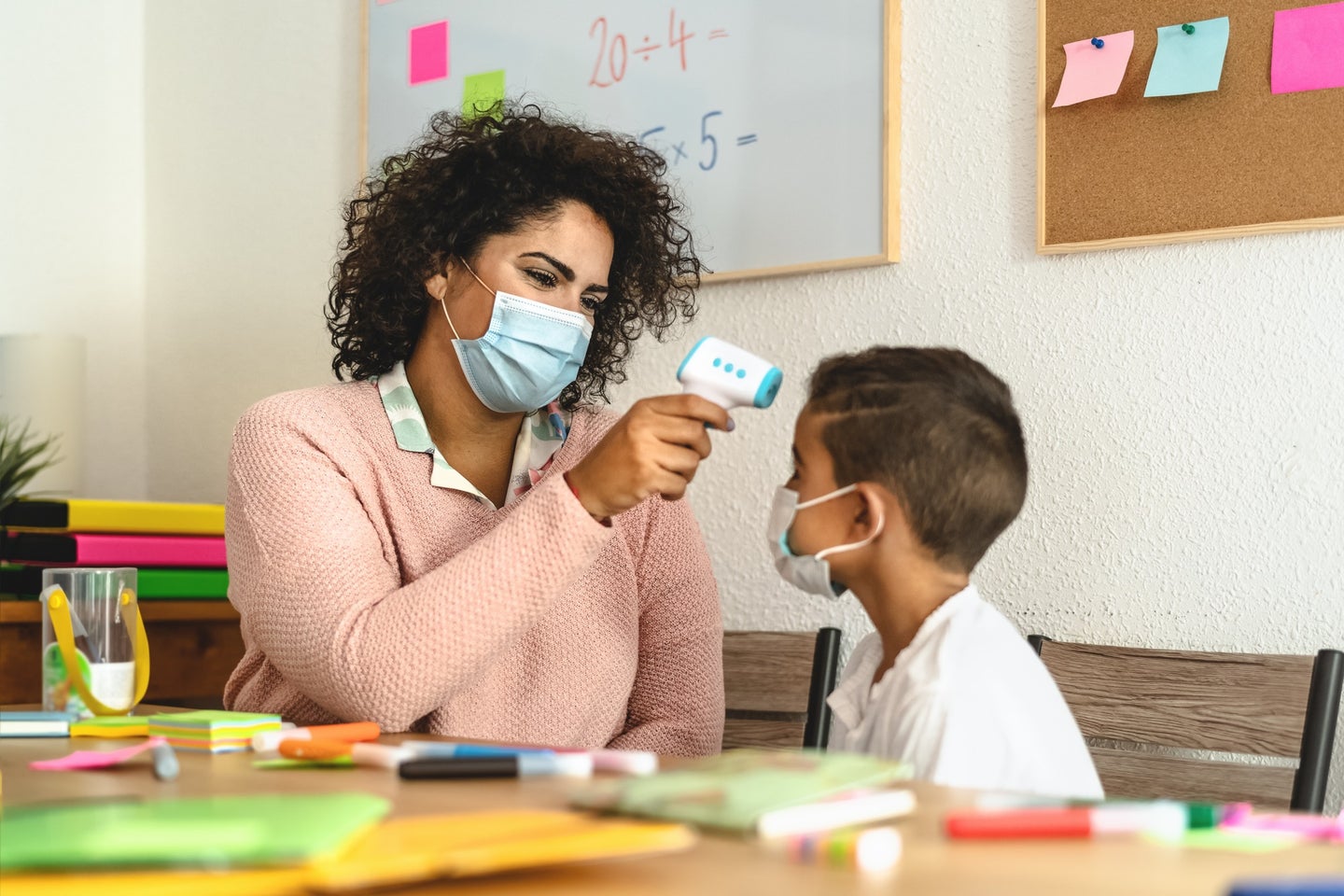 Some states are now advising daycares and preschools to have kids above the age of 2 to wear masks during COVID outbreaks. Deposit Photos
SHARE

Jane Roberts is the deputy editor of Undark. This story originally featured on Undark.

Around December 19, 2021, John and Bridget Rooks got a call from their daycare asking them to pick up their kids after another child tested positive for coronavirus. Such calls have become a regular occurrence for countless parents over the course of the pandemic, with the disruptions leading to lost workdays, burnout, and even feelings of despair.

“You can’t plan for it because you never know when it’s going to happen,” says John Rooks, an attorney who has two children, aged 4 years and 8 months, in daycare in Chicago’s Logan Square neighborhood. With the December case, he noted, “it was just ‘Come pick up your kids and we’ll see you after the New Year.”

Chicago Public Schools—like many districts across the United States—have implemented a program for students known as test-to-stay, in which children who are exposed to the virus, are not fully vaccinated, and have no COVID symptoms, may test out of quarantine and remain in school. But similar initiatives for younger children in daycares and preschools are lacking. (According to the Centers for Disease Control and Prevention, vaccinated individuals do not need to quarantine following an exposure as long as they remain asymptomatic.)

“You kind of get the sense that the under-5 cohort has been a little bit left behind,” Rooks says. With limited and sometimes conflicting guidance from public health authorities—and vaccine authorization for this age group still pending—the Rookses and other parents are left wondering whether the test-to-stay protocols could be used to keep their kids in care, too.

So far, however, guidance on the subject has proven difficult to parse. In December, the CDC endorsed the use of test-to-stay in K-12 settings based on data from several studies. But missing from the agency’s announcement was any mention of daycares and early childhood education centers. In an email to Undark, CDC spokesperson Jade Fulce wrote that daycare centers and pre-K programs do have the option to use test-to-stay, but the “impact and feasibility” of the protocol for those younger children “is not known at this time.” The CDC, she continued, is evaluating test-to-stay “in early childcare and education settings and will share findings once the evaluation is complete.”

Without any clear federal guidance, however, many state and local agencies seem to be taking a conservative approach for daycares and preschools. Such facilities often lack centralized infrastructure, which makes testing and other guidelines difficult to implement. Between the lack of clear organization and differing recommendations from public health experts, parents face a confusing mashup of policies.

Now, state-wide test-to-stay programs for childcare in Massachusetts and Vermont may provide a glimpse into how to keep childcare centers open—and alleviate the burden on parents.

Public schools in the US are split into districts, providing them with central organizing bodies for set geographic areas. But a similar system doesn’t exist for childcare centers.

For children under age 5, “every program is their own island,” says Sarah Muncey, co-founder of Neighborhood Villages, a nonprofit working with the Massachusetts Department of Early Education and Care on the state’s testing initiative. (Private schools also have the option to opt-in to test-to-stay programs.)

The line between preschools and daycares isn’t always clear. Depending on the state, such programs may be overseen by different agencies. While some pre-K programs—which can serve a range of ages, typically up to age 5—have been able test children to keep them in care if the programs are operated out of schools that also serve older students, separately run preschools and care centers often have to close or send whole classes home in response to every positive COVID test.

As a result, across much of the country, parents with young children are in limbo, with scattered and uneven advice from policymakers and experts. Despite pleas from families in New York, for example, Jeannine Smith, a spokesperson for the state’s Office of Children and Family Services, tells Undark that “New York State regulated child care programs currently do not allow for a test-to-stay option.”

Similarly, Melaney Arnold, a public information officer with the Illinois Department of Public Health, said test-to-stay is not available to daycare centers in the state. While it is not prohibited for preschools, which fall under the oversight of the Illinois State Board of Education rather than the state’s Department of Children and Family Services, Arnold noted that such protocols may be difficult for this age group because it can be tricky to get young kids to properly mask and social distance. “For this reason,” Erica Duncan, an information coordinator for the Chicago Department of Public Health tells Undark, “we have not attempted to initiate this program in Early Childcare facilities.”

While acknowledging that reducing COVID-19 transmission in childcare settings poses different challenges than in K-12 schools—where older students are often vaccinated and better able to mask and social distance—last month, experts with the PolicyLab at Children’s Hospital of Philadelphia released guidance specific to kids under 5. In addition to encouraging mask use in children over 2 and requiring those with COVID-like symptoms to stay home, the authors advised that kids who are exposed to the virus but are not experiencing symptoms should be allowed to continue attending their care facilities.

The authors did not specifically weigh in on test-to-stay, which even if implemented leaves those under 2 subject to quarantine since the Food and Drug Administration has not yet authorized any rapid COVID-19 tests for use in this age group. Still, the authors wrote, “we acknowledge that some of our recommendations provide more flexibility than existing CDC and public health guidelines.”

Although the recommendations cannot completely eliminate the risk of virus transmission, the authors continued, “they balance a goal to reduce overall exposure risk with the need for these institutions to continue to operate, allowing children to socialize and caregivers and childcare workers to return to work.”

For some advocates, such efforts are sorely needed. “This level of instability cannot stand,” said Neighborhood Villages’ Muncey. “And Omicron showed us that the virus moves faster than we can.”

Following the rollout of a weekly pooled testing program—which combines samples from several people into a batch, making the process faster and cheaper—launched for early childhood education centers last summer, Muncey’s organization worked with the state to offer additional layers of testing as part of Massachusetts’ new Testing for Child Care initiative. Childcare programs that sign up will have access to free rapid tests provided by the state starting this week, along with training and implementation resources. They may also opt into other testing options.

According to the Massachusetts Department of Early Education and Care, participating programs must agree to abide by the state’s guidelines for COVID-19 mitigation, which say that children aged 2 and up “may remain in care if they test each day for five consecutive days as part of the Rapid Cohort Testing option.” Under those guidelines, either childcare program staff or parents may administer the tests.

Last month, the Vermont Department for Children and Families launched its own test-to-stay program, offering rapid tests for kids aged 2 to 5 who are enrolled in non-school-based childcare programs. Unlike the Massachusetts program, only parents can administer the tests, not childcare staff. According to a webpage for the initiative, called Tests for Tots, childcare programs are asked to inquire about daily test results “but should not require proof of a negative test.” For children under 2 exposed to the virus, the guidelines stipulate quarantining and taking a PCR test on day five.

Some medical experts have expressed reservations about test-to-stay programs, especially given recent high levels of COVID transmission. Last month, Julia Koehler, an assistant professor of pediatrics at Harvard Medical School, told the Boston Globe that with more people infected in the community, false negatives would become more likely. “So in child- or daycare settings with young children,” she said, “where masking and distancing is not possible, one infected child can infect the whole group.” Although the Massachusetts guidelines recommend encouraging children aged 2 to 4 to wear masks indoors if they’re able, this is not a requirement. Vermont’s program also allows children aged 2 to 5 who cannot mask consistently to still participate.

The volume of testing required in a COVID-19 surge can also be unwieldy. “To some extent,” says Westyn Branch-Elliman, an infectious disease specialist who was involved in designing the test-to-stay program for Massachusetts schools, “there’s a feasibility question about how well this will translate to daycare settings.” As Massachusetts ramps up its Testing for Child Care program, it will move away from testing asymptomatic close contacts in K-12 schools to shift the focus to identifying symptomatic cases. In both Massachusetts and in Vermont, schools are moving towards using rapid home tests, rather than lab-based ones.

For her part, Muncey said she hopes to see even more states implement test-to-stay programs in childcare settings. “If another state wanted to do this,” she says, “what you really need—the only missing piece—is a few, really highly competent, multilingual patient operations staff members.” Because there is no central district for a geographical area in childcare, she continued, “we need a delivery system.”

Back in Chicago, Rooks said he would love to see the city and the state issue some sort of guidance to allow test-to-stay for his children.

“There’s sort of like this ticking timebomb over your head all the time,” he says. Parents never know when they will get a call telling them to come and get their children. “It’s just always looming over you,” said Rooks. He estimates that since daycares reopened after the initial shutdown in March 2020, his family has lost several months of childcare due to COVID-19 quarantines.

While Rooks says he doesn’t blame anyone for the situation the pandemic has created, not being able to access care even when his own children repeatedly test negative, he says, is “a tough situation to be in.”