A huge undertaking that could help researchers visualize neurological diseases 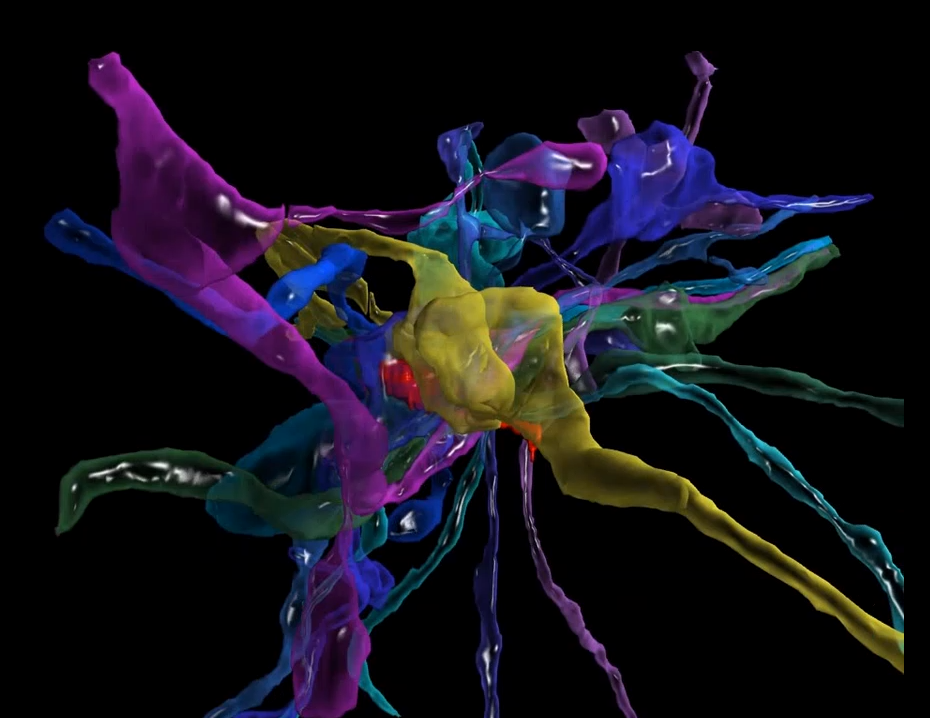 The human brain remains one of the most mysterious organs in the human body. However, an imaging technique tested on mice brains and developed by a group of researchers including from Harvard, MIT, and Boston University, may bring them one step closer to understanding the human brain’s intricacies. Their results were published yesterday in the journal, Cell.

The approach will allow scientists to see the brain’s beautifully layered 3D structure on the nanoscale with different colors to separate and distinguish cell types. They first created the 3D structure of a mouse dendrite by combining electron microscope (EM) images of the brain structure together. Then, they achieved the color differentiation using VAST, an annotation tool–developed at Harvard by a co-author of this study–that allows users to manually add color to EM images. This is the first time VAST was used to create color images of the brain.

The point of this study was simply to see what could be learned from seeing the brain, anatomized into its parts using different colors. But going forward, the researchers think this tool could be used to see what a neurological disorder actually looks like in the brain and how the human brain differs from that of other animals as well as how individual human brains differ from each other.

To see if the application would actually work, the researchers chose to visualize parts of a mouse’s neocortex–the area of the brain that receives sensory information from mouse whiskers, which are even more sensitive than human fingertips. They first took EM images of the structure, combined them, then, using VAST, they assigned different colors to piece apart the individual structures and cell types, allowing them to see each type individually and how they come together to create the brain structures. In the video below, they use color coordination to reconstruct the structures that surround two dendrites–the tree-like branches of a neuron that receive sensory information from other neurons. The objects are initially shown as they would appear in the brain. Then, they are sorted by category–axonal, dendritic, or glial–then further by functional type–excitatory or inhibitory for axons and dendrites and when applicable, by type of glial cell.

“The complexity of the brain is much more than what we had ever imagined,” said Narayanan Kasthuri, an assistant professor at Boston University School of Medicine and lead author of the study, in the press release.

Here’s a breakdown of the color-coordinated brain structures in .gif form:

However, despite the beauty of the finished product, whether or not the technique will actually be put to use is still up in the air. During their testing, the researchers found that the sheer magnitude of neuronal connections that make up the brain imposed a huge challenge–one that the authors conclude in their study made them question whether the finished product justifies its use. They write that their effort “lays bare the magnitude of the problem confronting neuroscientists who seek to understand the brain.” They also used a mouse’s brain and note that a human brain has far more neuronal complexity. But despite the brain’s so-called near impossible-to-understand intricacies, they remain hopeful: “In the nascent field of connectomics there is no reason to stop doing it until the results are boring.”