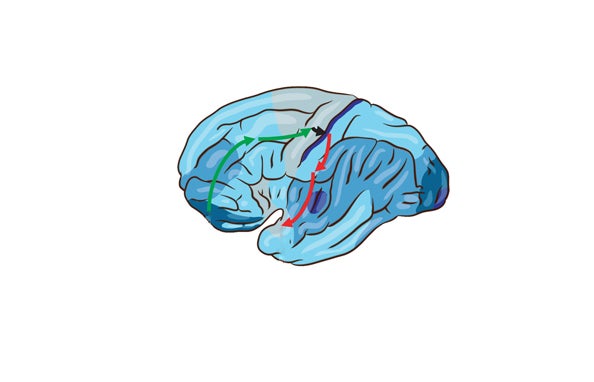 We don’t know much about the brain. Scientists and researchers have poked and prodded parts of our most complex organ for centuries, giving names to the most obvious parts. But we still lack answers to fundamental questions, like what the brain does with most of its energy, or how diseases make neurons in the brain affect each other.

A researcher at IBM has uncovered what could be a start to these answers: a model for what the brain does at rest, when it’s not reading or thinking or cooking you breakfast. IBM neuroscientist James Kozloski calls it “the Grand Loop.”

“The brain consumes a great amount of energy doing nothing. It’s a great mystery of neuroscience,” Kozloski said. “You don’t spend that much energy on noise unless there’s a really good reason.”

He proposes that the brain is actually always looping signals through a series of pathways in the brain, made of neurons and tissue. Kozloski says these pathways are like city streets, and the brain is always tracing them, retracing them, and then tracing them again. The pathways themselves lead through three areas of function in the brain: sensory (what’s happening), behavioral (what can I do about it), and limbic (what does it mean to me).

There are areas of the brain that incorporate new information, but Kozloski credits much of the brain’s energy to these cycling processes. Since the pattern is cyclical, it’s described as a “closed loop,” rather than the traditional way of thinking, that the brain gets inputs from the world and turns that into outputs as bodily interaction.

In order to test this theory, Kozloski ran the model through IBM’s neural tissue simulator, a set of algorithms that mimics the way neurons fire in the brain.

While we can see brain activity on fMRIs, this research gives us a better understanding of what’s going on in those scans, and makes it easier to study neurological disease.

Kozloski mentions that from an evolutionary perspective, this could be the mechanisms that humans use to predict what could happen in new situations, drawing from past experiences.

But one immediate application of this knowledge could be towards Huntington’s disease research. Since we now have a theory about how neurons orchestrate their communication, we can look at how neurons physically affect each other, as IBM suspects is the case in Huntington’s.

“We’re really stuck when it comes to mental health and neurogenerative disease,” Kozloski said. “Huntington’s is caused by a single gene, but there’s been no progress in understanding of how that gene causes neurodegeneration. ”

But by looking at Huntington’s with the new model in mind, information made by one wrong gene can cascade into misinformation for an entire neural pathway. If the gene makes a mutant protein, and the protein changes how a neuron sends or receives signals, that could cause a chain reaction that affects an innumerable amount of other neurons.

While this research on Huntington’s is still a hypothesis, Kozloski is optimistic that this model will help the field understand the brain in a new way. He says that the next area of research is to find out how the pathways are chosen, to greater understand the motivations of the brain. And as an evolutionary biologist, he thinks that there’s a specific reason to be found.

“If it wasn’t doing something important,” Kozloski said, “it would have been weeded out long ago.”

This article has been updated to reflect the correct spelling of James Kozloski’s name, and to correct a small grammatical error.