Genetically Modified Algae Are Magnetic, For Ease of Manipulation

Proving that there’s always a different way to approach a problem, researchers at Los Alamos National Lab have devised a... 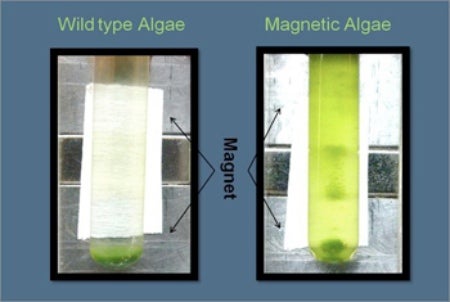 Proving that there’s always a different way to approach a problem, researchers at Los Alamos National Lab have devised a pretty clever method of algae harvesting that could take a major chunk out of the cost of algae-based biofuel production. And all they had to do was create a magnetic organism.

Scientists at LANL have genetically engineered a new kind of algae that is magnetic, which could lead to new and simple ways of both extracting genetically engineered biofuel-producing algae from water and extracting the lipids that contain the hydrocarbons from the algae. This part of the process generally accounts for roughly a third of the total cost of algae-based biofuel production, but now could conceivably be performed with a simple permanent magnet. That’s a lot simpler and cheaper than complex separating machines and other mechanical means of dividing algae from solutions.

The team created their GM magnetic algae by lifting a gene from magnetotactic bacteria–those are bacteria that use the Earth’s magnetic field to get around–and dropping it into the algae. When expressed, the gene causes the production of magnetic nanoparticles in the algae just as it does in the bacteria. Those in turn can be used to manipulate the algae.

The result: an algae that can be separated from a solution with a magnet. Why didn’t we think of this sooner?