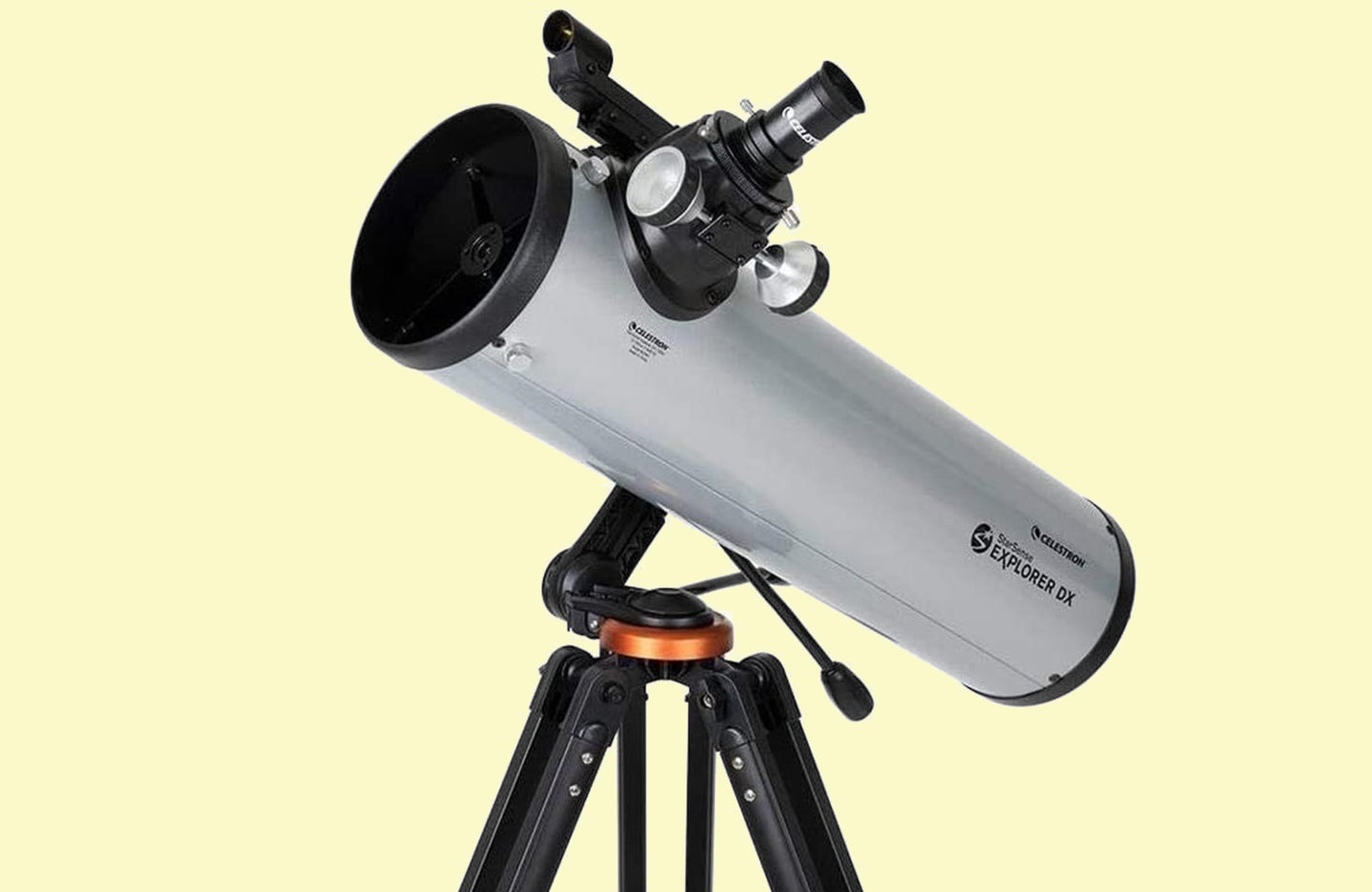 Looking to stargaze on a budget? We’ve got the goods on the best telescopes under $500.

Telescopes, in their basic function, are our connection to the stars. For millennia, humankind has gazed skyward with wonder into the infinite reaches of outer space. And as humans are a curious bunch, our ancestors devised patterns in the movements of celestial bodies and gave them names and built stories around them. The ancient Egyptians, Babylonians, and Greeks indulged in star worship. But you don’t have to follow those lines to geek out over the vastness of the night sky. It’s just so cool. Fortunately, whatever your motivation for getting under the stars, there is an affordable option for you on our list of the best telescopes under $500.

How we chose the best telescopes under $500

The under-$500 telescope market is crowded with worthy brands and models, so we looked at offerings in that price range from several well-known manufacturers in the space. After narrowing our focus based on personal experience, peer suggestions, critical reviews, and user impressions, we then considered aperture, focal length, magnification, build quality, and value to come up with these five models.

The best telescopes under $500: Reviews & Recommendations

Why it made the cut: Solid build and specs, paired with the remarkable StarSense Explorer app, make this telescope a perfect introduction to celestial observation.

Newbies to astronomy today can have a decidedly different experience than beginners who started stargazing before smartphones were a thing. Instead of carting out maps of the night sky to find constellations, the StarSense Explorer series from Celestron, including the DX 130AZ refractor, makes ample use of your device to bring you closer to the stars.

With your smartphone resting in the telescope’s built-in dock, the StarSense Explorer app will find your location using the device’s GPS and serve up a detailed list of celestial objects viewable in real time. Looking for the Pleiades cluster? This app will tell you how far away it is from you and then lead you there with on-screen navigation. The app also includes descriptions of those objects and tips for observing them, as well as other useful info.

The StarSense Explorer ships with an altazimuth mount equipped with slow-moving fine-tuning controls for both axes so you can find your target smoothly. And for those times you want to explore the night sky without tethering a smartphone, the scope’s red dot finder will help you zero in on your targets. The two eyepieces, measuring 25mm and 10mm, are powerful enough to snag stellar views of the planets, but not quite enough to see the details a high-powered eyepiece would deliver.

Why it made the cut: This telescope punches above its weight class in size and power, making it an ideal scope for viewing planets.

Let’s be real—most consumers in the market for a moderately priced telescope are in it to gain spectacular views of the planets and galaxies, but probably not much else. And it’s easy to see why. Nothing makes celestial bodies come alive like viewing them in real-time, in all their colorful glory.

If that sounds like you, then allow us to direct you to the Sky-Watcher Skymax 102, a refracting telescope specializing in crisp views of objects like planets and galaxies with ample contrast to make them pop against the dark night sky. The Skymax 102 is based on a Maksutov-Cassegrains design that uses both mirrors and lenses, resulting in a heavy-hitting scope in a very compact and portable unit. A generous 102mm aperture pulls in plenty of light to illuminate the details in objects, and the 1300mm focal length results in intense magnification.

Why it made the cut: Top-notch specs and an enviable lens setup make this telescope ideal for astrophotography.

Sometimes you want to share more than descriptions of what you see in the night sky, and that’s where this guidescope comes in, helping you to focus in on the best full-frame image. You can go as deep into the details (not to mention debt) as your line of credit will allow in your quest to capture the most impressive images of space. Luckily, though, this is a worthy option at a reasonable price.

The Williams Optics Guide Star 61 telescope is a refracting-type scope with a 360mm focal length, f/5.9 aperture and 61mm diameter well-suited to capturing sharp images of planets, moon, and bright deep-sky objects. The GS61 shares many specs with the now-discontinued Zenith Star 61, including focal length, aperture and diameter, as well as the FPL53 ED doublet lens for high-contrast images.

The scope’s optical tube is about 13 inches long and weighs just 3 lbs.—great for traveling with the included carrying case—with a draw-tube (push-pull) focuser for coarse focusing and a rotating lens assembly for fine focus. Attaching a DSLR camera to the Guide Star 61 is a fairly easy job, but note that the flattener for making that connection is a separate purchase.

Why it made the cut: The entire package is designed to get kids exploring space right out of the box.

Parents have a limited window of time to recognize and develop their kids’ interests. That’s what makes the Orion Observer II such a great buy. Seeing the craters on the moon or the rings of Saturn for the first time can not only affirm your kids’ curiosity about space but also expand their concept of the universe—and they can get those goosebumps while learning through this altazimuth refractor telescope.

The Orion Observer II is built to impressive specifications, with a 700mm focal length that provides 71x magnification for viewing the vivid details of planets in our solar system. True glass lenses (not plastic) are a bonus at this price point, and combined with either included Kellner eyepieces (25mm and 10mm), the telescope delivers crisp views of some of space’s most dazzling objects.
Kids and parents can locate celestial objects with the aid of the included red-dot finder. The kit also includes MoonMap 260, a fold-out map that directs viewers to 260 lunar features, such as craters, valleys, ancient lava flows, mountain ranges, and every U.S. and Soviet lunar mission landing sites. An included copy of Exploring the Cosmos: An Introduction to the Night Sky gives a solid background before they go stargazing. And with its aluminum tube and tripod, the entire rig is very portable, even for young ones, with a total weight of 4.3 lbs.

EDITOR”S NOTE: Popular Science has teamed up with Celestron on a line of products. The decision to include this model in our recommendations was made by our reviewer independently of that relationship, but we do earn a commission on its sales—all of which helps power Popular Science.

Why it made the cut: With its feature set, portability, and nice price point, this scope is ready for some serious stargazing without a serious investment.

Getting out of town, whether you’re camping in the wilderness or taking a drive in the countryside, is one of the attractions of stargazing. Out in the great wide open, far away from streetlights, the stars explode even to the naked eye. Add a handy telescope like the Popular Science Celestron Travel Scope 70 Portable Telescope—our pick for the best portable telescope under $500—and you’ll see much farther into space. The fact that it’s as affordable as it is moveable just adds to the value.

The Popular Science Celestron Travel Scope 70 Portable Telescope is a well-equipped refractor telescope built for backpacking and adventuring but without skimping on cool gadgets. Whether you’re gazing at celestial or terrestrial objects, the smartphone adapter will aid you in capturing images with your personal device, with an included Bluetooth remote shutter release.

Designed with portability and weight in mind, the entire package fits into an included pack with a total of 3.3 lbs.—that includes the telescope, tripod stand, 20mm and 10mm eyepieces, 3x Barlow lens and more. Download Celestron’s Starry Night software to help you get the most from your astronomy experience.

What to consider when buying the best telescopes under $500

To get the best views of the stars, planets, and other phenomena of outer space, not just any old telescope will get the job done. There are levels of quality and a wide range of price points and features to sort through before you can be sure you’re making the right purchase for what you want out of your telescope, whether it’s multi-thousands or one of the best telescopes under $500.

There are three types of optics available on consumer telescopes, and they will help you achieve three different goals. Refractor telescopes use a series of glass lenses to bring celestial bodies like the moon and near planets into focus easily. Reflector telescopes—also known as Newtonian scopes for their inventor, Sir Isaac Newton—swap lenses for mirrors and allow stargazers to see deeper into space. Versatile compound telescopes combine these two methods in a smaller, more portable form factor, with results that land right in the middle of the pack.

Photographers will recognize this one—like on a manual camera, the aperture controls the amount of light entering the telescope. Aperture is the diameter of the lens or the primary mirror, so a telescope with a large aperture draws more light than a small aperture, resulting in views into deeper space. F-ratio is the spec to watch here. Low f-ratios, such as f/4 or f/5, are usually best for wide-field observation and photography, while high f-ratios like f/15 can make deep-space nebulae and other bodies easier to see and capture. Midpoint f-ratios can get the job done for both.

All the lens and mirror power in the world won’t mean much if you attach your telescope to a subpar mount. In general, the more lightweight and portable the tripod mount, the more movement you’ll likely get while gazing or photographing the stars. Investing in a stable mount will improve the viewing experience. The two common mount types are alt-az (altitude-azimuth) and equatorial. Altazimuth mounts operate in the same way as a camera tripod, allowing you to adjust both axes (left-right, up-down), while equatorial mounts also tilt to make it easier to follow celestial objects.

Q: What is the most powerful telescope for home use?

The most powerful telescope for home use from this list is the Sky-Watcher Skymax 102, which tops out at 130x magnification with its included eyepieces.

Yes, a 90mm telescope is good for viewing planetary features like the rings of Saturn and the Great Red Spot on Jupiter.

Q: How much does a telescope cost?

The cost of a telescope varies depending on the brand, model, and construction but there are plenty of affordable options—like the ones on this list.

Q: How powerful does a telescope have to be to see planets?

A telescope with a minimum 60mm aperture has enough power to see planets.

Q: What size telescope do I need to see the rings of Saturn?

You can see the rings of Saturn with as low as a 60mm aperture.

Q: What size telescope do I need?

The size of telescope you need depends on what you want out of it. This list of best telescopes under $500 gives a good rundown on telescope types, sizes, and uses.

Final thoughts on the best telescopes under $500

Although this group of sub-$500 scopes is fairly diverse, the Celestron StarSense Explorer DX 130AZ stands out in our best telescopes under $500 as the best place to start your interstellar journey due to its versatility and sky recognition app, which make for a fun evening of guided tours through the star patterns, no experience necessary.