AT&T vs. Verizon: The iPhone Dilemma

Is the time coming for the Grouse to finally buy one? 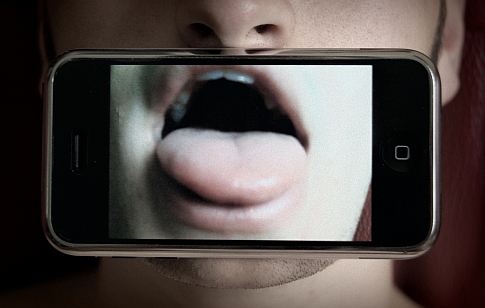 With delicious rumors circulating recently about Apple goods finally coming to the Verizon faithful, I’m on the fence now more than ever about my impending iPhone purchase. You see, I must have one and it’s only a matter of time before I do. My iPod Touch is fun for playing around with apps and hopping online via WiFi, but it’s no Jesusphone. I’ve been a Verizon customer ever since getting my first cell phone back in 2000. I don’t particularly like Big Red (for reasons I’ll happily delve into in a few paragraphs from now), but I never had a reason to jump ship until the iPhone landed on Planet Earth as an AT&T exclusive. Ever since, I’ve been plotting my exit strategy. Only, every time I’m about to pull the trigger, I hear from a friend about some annoying problem he or she is having with AT&T as it relates to the iPhone. Now, with whispers of some exciting new Apple devices reaching Verizon as early as 2010, I’m left pondering that eternal Combat Rock-ism: “Should I stay or should I go?”

Verizon and Apple have been in talks — that much is fact. AT&T’s exclusive on the iPhone runs out in 2010, so it makes perfect sense that Apple would be out there talking to other providers. It’s estimated that the iPhone has added 7 million subscribers to AT&T’s customer base since launch, so you can imagine how badly Verizon would want a piece of the pie. Not to mention how badly AT&T would want to hold onto it — there have been reports that AT&T is lobbying Apple for an exclusivity extension through 2010.

The rumors — supposedly backed up by “sources close to Apple” — are that two completely new iPhone-like devices are being readied for Verizon. So, even if AT&T does lock down exclusivity on the iPhone for another year, it’s completely feasible that these new devices would fall outside of the scope of that arrangement. The devices are rumored to be a smaller “iPhone Lite” and a larger-screened tablet that’s been compared to an eReader. Both are expected to run on Verizon’s future next-gen LTE network, and not on the current CDMA infrastructure.

Now I’m in a tough spot. Do I hold out to see if any of these rumors materialize? I could be waiting two years for nothing. Or, do I resolve to become an AT&T customer? Do I really want to deal with the hassle of switching providers? And what if I switch and I completely hate AT&T? Either way, I’m hopping into bed with the lesser of two evils.

As I said, I’m not a big fan of Verizon. The lack of a SIM card has been a point of contention since day one — seriously, would it have been such a hard technology to adopt? I’ve had at least five or six phones on Verizon since first signing up in 2000, and I learned early on (after a phone completely crapped out on me) to keep a hard copy of all of my contacts either on my computer or on a handwritten list. What a pain it is to re-enter them every time I get a new phone. Even on my current Bluetooth-equipped handset (the craptacular LG Voyager), I was forced to sync contacts over from my Mac one-by-one. A SIM card would have provided instant gratification. (I should mention that Verizon does offer a backup and restore service for contacts and other phone settings, but it costs $2 per month. No thanks.)

Verizon likes to have too much control over its handsets. On most devices, you can’t do a damn thing without doing it through Verizon’s “Get It Now” service. Email, Web surfing, GPS, photos, videos, ringtones, etc — it’s all on complete lockdown, requiring you to pay Verizon for the privilege of using these “extras.” Until recently, Verizon all but completely crippled Bluetooth on most of its phones to prevent users from doing something as simple as, oh I don’t know, transferring a photo over from a computer to use as wallpaper. If the iPhone had initially launched on Verizon, you can bet the App Store would never have happened. Of course, after seeing AT&T’s success with Apple, it’s no surprise Verizon might be willing to loosen up a bit.

I have a few other beefs with Verizon. How about the fact that my CDMA phone is a useless brick in all but a few international travel spots? On my last trip to England I had to shell out for a pre-pay phone just to make sure I wasn’t missing any important messages. Then there’s the deviousness the company recently demonstrated when it attempted to make a change to its policies regarding the sharing of customer information. Verizon Wireless subscribers (at least, those who receive their bills via mail) had a barely noticeable leaflet tucked into their statements notifying them that their personal information could now be shared unless they explicitly opted out by a certain date. Bogus. Finally, there’s the Verizon Wireless “Can You Hear Me Now?” guy, who regular readers of this column know I’ve taken a particular loathing to. I’m not sure exactly why he ruffles my feathers so much, but the mere sight of that dude makes me want to forever pledge my allegiance to AT&T.

Of course, AT&T isn’t without its problems, particularly when it comes to the iPhone. My biggest worry with AT&T, and the main reason I’ve remained in Verizon’s corner, is coverage. AT&T has Verizon beat when it comes to international coverage, but in my experience Verizon wallops AT&T domestically. In the almost 10 years I’ve been a Verizon customer, I’ve never had a problem getting a signal whether I’m in the canyons of New York City or roughing it in the boonies (the only exception being a mysterious dead zone somewhere in Connecticut along Amtrak’s Northeast Corridor). I’ll be in the same location with friends who aren’t able to get T-Mobile, Sprint or AT&T service, and I’ll be able to make and receive calls on my Verizon phone, no problem. Every time I think it’s time to ditch Verizon, this is the one thought that holds me back.

I’ve also noticed AT&T’s difficulty in getting its signal to penetrate buildings. Again, my phone will work perfectly, but a guy using an iPhone in the same room will have no service. A friend of mine claims that his coverage comes in bursts when he’s at the office. Every few hours he’ll receive a bunch of text messages at once, all which had been sent earlier in the day. Now, that kind of defeats the immediacy of the medium, doesn’t it?

My only other gripe with AT&T might seem small time, but it would drive me bonkers. I recently had an iPhone-equipped colleague over to my house, and as we hovered over my computer working on something together, my speakers would make this strange buzzing sound every time he received an email or text, and preceding every phone call. I just wouldn’t be able to deal with that all day.

Aside from international coverage and my whole SIM card stickup, AT&T’s biggest advantage over Verizon is the two-year head start it’s had on the iPhone’s bugs, glitches and growing pains. If these two mystery devices do ever show up on the Verizon network, I expect we’ll see a lot of the same problems AT&T experienced — especially with the launch of the iPhone 3G. What’s more, I can go out and get an iPhone on AT&T today. Right now it’s not a question of when these new Apple devices will be available to Verizon customers; it’s a question of if they ever will at all, or if they’re just the latest bits of gossip churned out by the infamously imaginative Apple rumor mill. Then, if they do actually ever launch, it’s likely they’ll only function on Verizon’s embryonic LTE network, which will only be in the baby stages of deployment through 2010. So, if Apple ever does makes a pact with Verizon, it’ll still be a nice long wait before any devices come to market. And besides, I want an iPhone — not a tablet or a half-an-iPhone.

In the end, I’m no closer to pulling the trigger on my iPhone procurement than I was 1,395 words ago. So, I’d love to hear what you think. Should I jump in and switch? Should I hold out? Are there any crimes against humanity committed by either AT&T or Verizon that I neglected to mention? Please share!