Watch NASA dump 450,000 gallons of water in less than a minute

Launching a big rocket? You'll need to get wet. 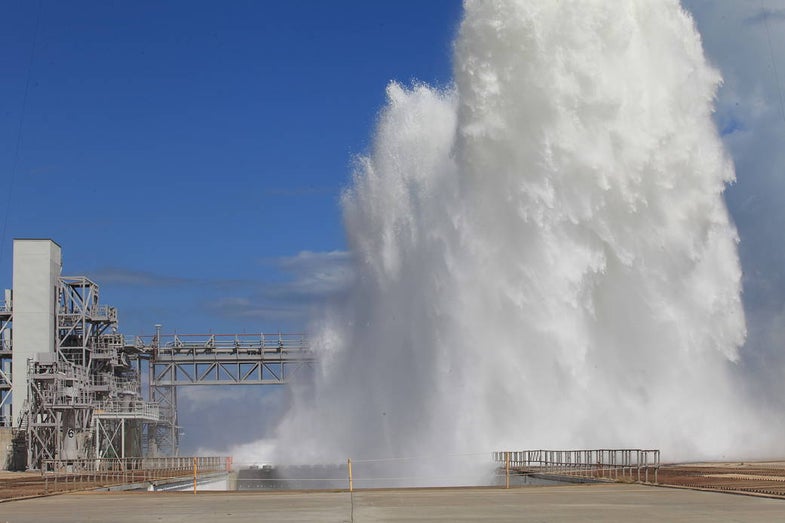 NASA frequently achieves breathtaking feats: launching a probe to kiss the sun, discovering new worlds in far-flung star systems, and keeping humans alive as they speed around in a spaceship 250 miles above Earth.

But space is hard, and it’s not always glamorous getting there. Sometimes NASA blows us away in more mundane ways—like by shooting about 450,000 gallons of water 100 feet into the air. It’s no surprise that the latest test of NASA’s Ignition Overpressure Protection and Sound Suppression (IOP/SS) water deluge system is making a splash all over the Internet. Just check out the footage for yourself:

The testing is part of the preparation for NASA’s new Space Launch System, a rocket intended to take humans beyond Earth’s orbit—around the moon and perhaps even to Mars. After a string of delays, SLS is supposed to take its first, uncrewed flight sometime in 2019.

SLS is a big ol’ rocket. In fact, it’s the first to ever surpass the strength of the Saturn V, a superlative craft that thrust six lunar missions into space. SLS’s engines and boosters will produce 8.4 million pounds of thrust, and in doing so will also create a ton of heat and noise. We’re not talking about the level of noise that makes you want to cover your ears: SLS will create acoustic energy capable of damaging the rocket, its payload, and the surrounding launch pad. In other words, it’s gonna go boom—big time. IOP/SS fights back with a big burst of liquid refreshment.

After making improvements based on a test back in December, engineers at the Kennedy Space Center’s Launch Complex 39B completed the run above, where 450,000 gallons of water flowed through the system in the span of a minute, and at times reached 100 feet high. That’s well over half the capacity of an Olympic swimming pool shooting up 30 feet higher than the White House. The release of the water helps protect surrounding hardware by dampening thermal and acoustic energy.

Some of the water will evaporate in a real launch, but channels called water flumes will guide the rest of the spillage into drains and trenches nearby. With any luck, we’ll see IOP/SS in action sometime next year.