The industrialist's dream of agricultural-industrial micro-grids did not turn out the way he imagined. 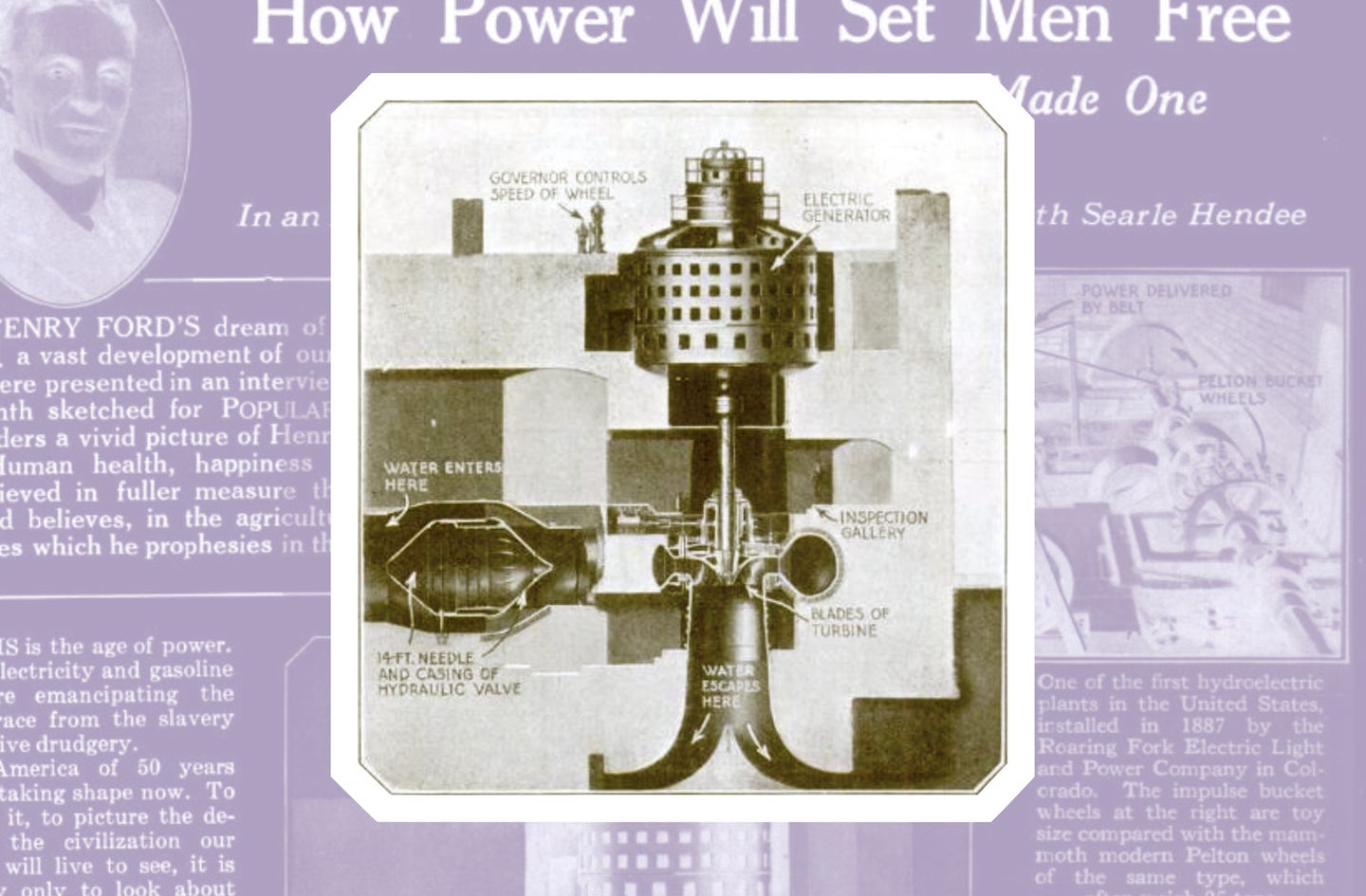 A century ago Henry Ford called for sustainable living and an end to coal. Popular Science
SHARE

Scientists knew about carbon emissions-induced climate change long before global warming and rising seas began to afflict our planet. Alarms were sounded by many, among them industrialist Henry Ford. In a July 1922 essay for Popular Science, “How Power Will Set Men Free,” Henry Ford was already promoting an alternative electric-power vision for America. His advocacy for clean power and an end to coal would tee off a debate that has simmered for more than a hundred years. Some of his power predictions and proposals were not quite on the mark, but his vision is worth assessing.

Ford believed cities were centers of opportunity and that the electricity powering them shouldn’t come from coal. “Coal,” he wrote, “is just about the most inefficient and expensive fuel there is.” So, in what may be one of the earliest industrial-age appeals for sustainable living, Ford proposed an alternative: agricultural-industrial communities powered by locally sourced clean energy, or mini-grids.

Ford’s legacy as a writer is checkered: At best a crystal ball, while, at worst, toxic. Along with several books–including a few about his own accomplishments and ideas–the Ford Motor Company founder had written some of the most widely circulated anti-Semitic screeds. He apologized in 1927, but by then much damage was done. It is unfortunate that in 1922, the propagandist and the industrial futurist Popular Science sought to feature were the same man.

In the 1920s, at a time when less than half of American homes had been equipped with electricity and electrical utilities were a jumble of small, inefficient distribution systems, Ford sensed the coming consolidation of centralized electrical grids. “Centralization of power has caused centralization of industry. But this cannot be expanded indefinitely,” Ford wrote. Instead, he envisioned an America filled with agricultural-industrial communities sprinkled along river basins “like jewels on a string,” deriving their power from water and their food from surrounding local farms.

“What Ford described,” notes Paulina Jaramillo, codirector of the Green Design Institute at Carnegie Mellon University, “became the suburbs we developed in the middle of the last century, except the suburbs developed close to cities, not farms, and have massive negative externalities.” This is otherwise known as the sprawl–paving and building over open spaces like forests and fields, and driving up carbon emissions with more road transportation.

Even though suburbia didn’t unfold as successfully as Ford had envisioned (as a carmaker he benefited nonetheless), his vision was not new in 1922. Ebenezer Howard, a London-based stenographer for Parliament and self-described urban planner had been promoting a similar idea for decades. In his book, Garden Cities of To-morrow (1898), Howard described cities that would be confined in size, offer ample open space and parks, and include access to agriculture. In the U.S., the City Beautiful movement mirrored Howard’s ideas, thriving for thirty years before Ford’s Popular Science editorial.

Ford’s hydropower vision was also not new. As early as the 1880s, small hydroelectric power plants were being installed to light up Midwest factories. Ford recognized that all cities, large or small, would need electric power to prosper. “Power,” he noted, “is the key to tomorrow.” He believed that clean power generated locally would be preferable to burning coal in a central power plant and ferrying the volts over large swaths of countryside.

Jaramillo agrees that renewable-energy “mini grids” like those described by Ford can “improve resilience and reliability” of power. But she’s more sanguine about America’s centralized grid system. “It’s a marvel of engineering,” she notes, calling it “probably one of the coolest engineering projects of the 20th century.” That’s because it can “instantaneously match demand and supply of electricity, with very limited storage.” In fact, in 2000, the National Academies of Engineering cited the US electric grid as the greatest engineering achievement of the 20th century. Jaramillo concedes, however, that centralized grids face considerable challenges with the effects of climate change, which will escalate demand while impacting supply and distribution. She envisions reinforcing central grids with renewable-energy “grid-connected mini grids” that can transact with a centralized grid but also operate independently.

In 1922, it would have been impossible for Ford to anticipate just how much power America would eventually require. “America’s rivers,” Ford believed, “offer enough power to turn every wheel, heat every room, and light every building and street in America.” In 2022 terms, he was off by about a factor of ten. According to the US Energy Information Administration, U.S. rivers, or hydroelectricity, maxed out in the 1990s, and now generate less than 10 percent of our total energy, despite the more than 1,400 hydropower plants parked along their banks. In contrast, coal still accounts for more electricity generation in the US than all renewable energy sources combined, albeit, just barely (22 versus 20 percent). According to a 2021 report by the nonprofit Environment America Research and Policy Center and Frontier Group, while hydropower output has remained stagnant, wind, solar, and geothermal grew from half a percent of US output in 2001 to 12 percent two decades later and are poised to challenge coal’s number two rank in the next few years (natural gas is number one).

Johanna Mathieu, Associate Professor of Electrical Engineering and Computer Science at the University of Michigan and a member of the Michigan Power and Energy Lab, sees Ford’s vision as “a piece of the puzzle.” Like Jaramillo, she envisions interconnected and renewable-powered micro-grids that can benefit from energy production anywhere in the system, but can be isolated and operated independently when the system is experiencing problems. Mathieu’s work centers on demand-side technologies, or what she calls “grid edges.” By making homes and appliances aware of their power network, they can cooperate with one another to optimize energy use and “balance the mismatch between supply and demand.” For instance, her team is working on a demonstration project in Texas with 100 houses to coordinate air conditioning to keep power demand balanced, remotely using sensorized thermostats. “We’re controlling people’s air conditioners,” she explains, “switching them on and off at slightly different times, but making sure that houses are still within the existing temperature range that they would normally operate in, so nobody should notice.” By accessing sensorized thermostats remotely, coordinating when to switch them on and off to maintain precise temperatures, Mathieu’s solution could save enough energy to represent a virtual power plant.

This energy-intensity solution could be called a “soft path” to mitigating carbon emissions. In a landmark 1976 article for the Council on Foreign Relations called “Energy Strategy: The Road Not Taken?”, physicist Amory Lovins said that the U.S. would soon have to choose between two energy paths with profound implications on Earth’s future. The “hard path” would double-down on business as usual, supplying energy with “hard technologies”—more coal-fired plants and large-scale, capital intensive, and environmentally hazardous solutions. The “soft path” would focus on stretching how far a unit of energy could go in powering homes and businesses. To increase supply, the soft path would transition to sources and technologies that are “flexible, resilient, sustainable, and benign.”

Lovins did not mince words. He made clear that if the hard path were chosen, it would make the doubling of atmospheric carbon dioxide concentration early in the next century virtually unavoidable, with the prospect then or soon thereafter of substantial and perhaps irreversible changes in global climate.”

[Related: “Climate change is blowing our predictions out of the water, says the IPCC”]

By countless accounts, we are reckoning with those changes now. Since that the 1976 article, America has been on Lovins’s hard path, relying mainly on centralized coal and gas for power. Forced by climate change to rapidly replace fossil fuels with renewable energy and to harden our electric infrastructure, can we transform fast enough to become as sustainable as Ford envisioned a century ago?

Mathieu believes the technology already exists to at least transition fully to renewables. She cites regulatory, policy, and legal obstacles as some of the biggest barriers. “But if we chose to do it,” she adds, “I think we could.”