In 2007, the first solar electric boat crossed the Atlantic Ocean. Now a Swiss group wants to cover that distance... 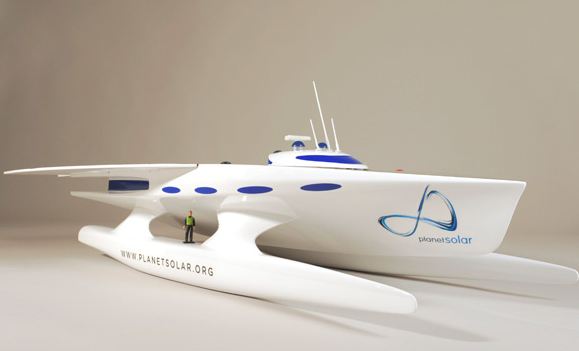 In 2007, the first solar electric boat crossed the Atlantic Ocean. Now a Swiss group wants to cover that distance and keep going, circling the globe on nothing but the sun’s power for the first time.

The team of engineers and scientists has embarked on the building of its 98-foot long vessel, dubbed Planet Solar, in Kiel, Germany. The boat’s power will come from the 5,000 square feet of solar panels, about the size of two tennis courts, covering its broad deck. When the sun is shining bright above, they will convert 23 percent of the sun’s rays to energy — six percent more than average solar panels.

Even though batteries aboard Planet Solar could store enough energy to power it through up to three days of overcast weather, the sailors will try to steer clear of clouds: constant communication with the French meteorological institute, Meteo France, will help the sailors stay the sunny course.

The $11.5 million project, which is led by paramedic-turned-yachter Raphael Domjan, should be ready for its maiden voyage next summer. It will warm up in European waters before the two-skipper team, including Domjan, attempts to tackle global circumnavigation in spring 2011. At a maximum speed of 16 mph, Planet Solar would be the fastest solar electric boat. The team expects to finish the first leg of its journey across the Atlantic in about two weeks, compared to the six months the solar boat took back in 2007.

If sailing by sun becomes practical, it would be a return to the green boating methods of the days of Christopher Columbus. Those long-ago voyages relied solely on a different type of renewable energy: wind. And, if wind-powered sails could be combined with solar panels, we might really pick up the boating clip.

Keep an eye out for Planet Solar in the next couple years. The team plans to roll out floating workshops to teach about alternate energy at each of its ports of call.