The Science of Sci-Fi 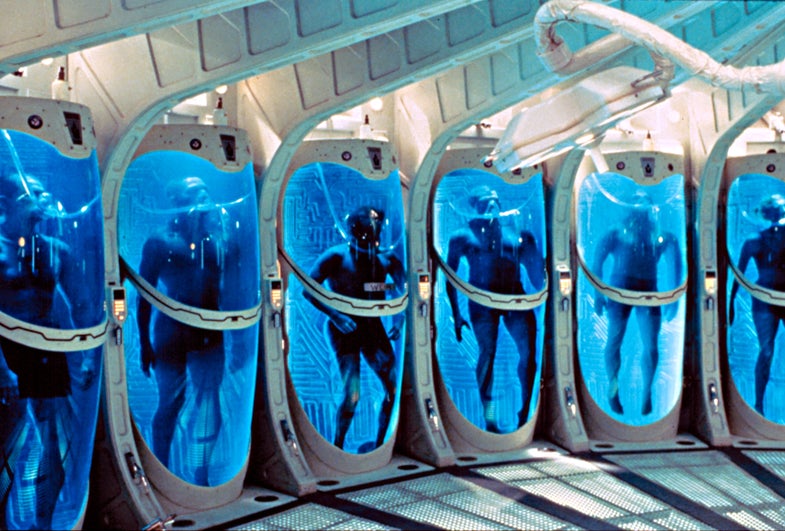 In the world of cinematic science fiction one of the most appealing themes involves a universe brimming over with intelligent life. In this imagined future (or past) humans interact with alien friend and foe because they’ve at last hammered down the ability to travel to distant stars and galaxies, and, yes, “to boldly go where no man has gone before.” Having grown up on the original Star Trek series, observed the effect of the Star Wars movies on the zeitgeist of movie-going generations and enjoyed sci-fi soap operas like Battlestar Galactica, I have to admit I wish we could make it happen; no matter the odds.

Now, while the laws of physics put severe limitations on whether we could ever travel the vast distances involved in any reasonable period of time, as far as we know physics may not absolutely prohibit the possibility. So, with this in mind, let’s have a brief look at some of our favorite science fiction movies and shows and see how they deal with transporting protagonists through the vastness of space. Because, insofar as it’s possible, we one day might employ those same laws of physics to our advantage. 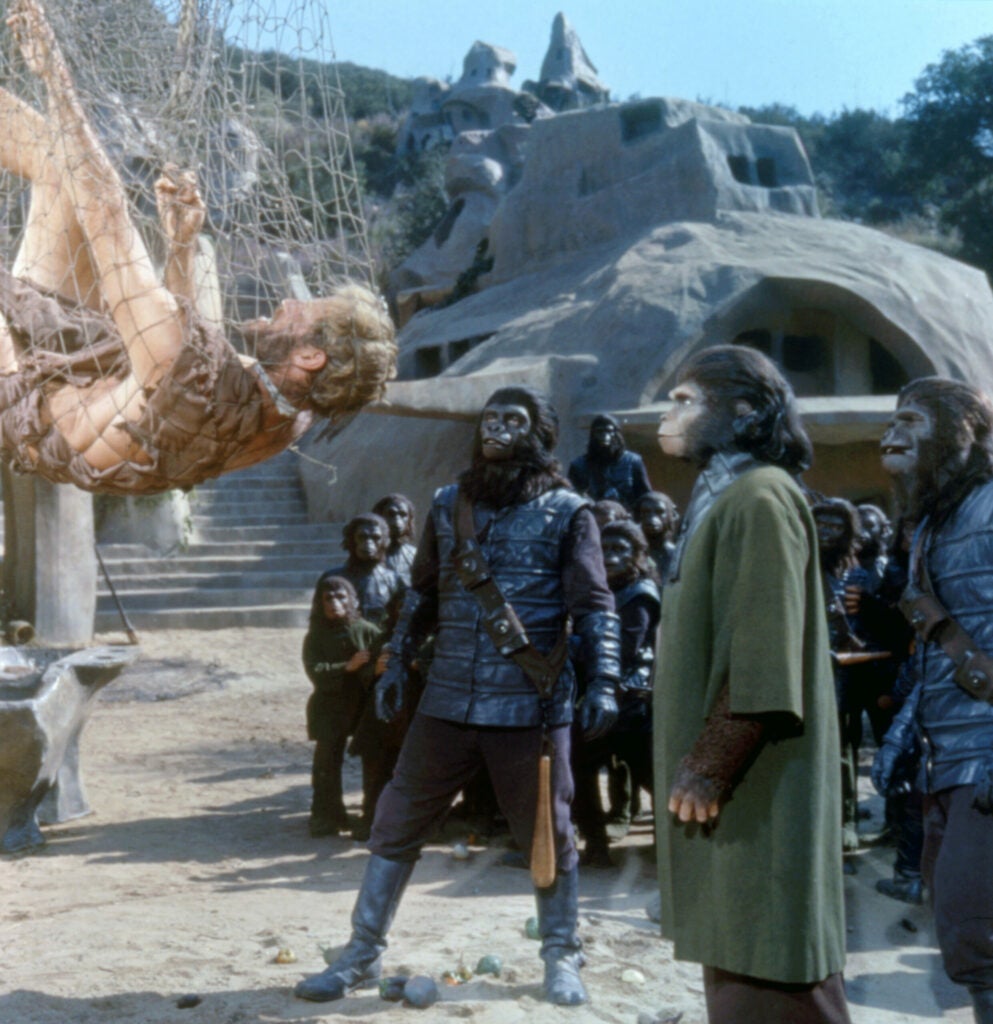 Remember that 1960’s sci-fi masterpiece—the original Planet of the Apes? In that now cult classic film a group of astronauts travel to Earth’s distant future where “apes rule!” While there, Charlton Heston chews up the scenery and, more importantly, shows us a pretty good example of how Einstein’s theory of special relativity makes space travel a challenge. In the film the astronauts have been traveling for one and a half years in their frame of reference; meanwhile 2000 years have elapsed on Earth. According to the rules of special relativity this is a realistic scenario. But how can this be? It’s actually a natural consequence of the observation that the speed of light (c) is constant regardless of the frame of reference from which you measure it. Through a series of logical steps Einstein reasoned that this means that the amount of time that passes between events depends on the frame of reference from which you observe them. According to special relativity anything with any mass will always travel less than the speed of light, but if you get close enough then time dilation starts to rear its (ugly?) head. The time dilation equation can be expressed as follows: Tship = Tearth(1-v2/c2)1/2 (Using the above equation you can show that the ship must have been traveling at an average speed of v = 0.9999997c relative to Earth to achieve this amount of time dilation.) So while it’s theoretically possible to get places somewhat quickly in your spaceship if you travel close enough to c, when you arrive at your destination you’re hardly going to agree on what time it is, what year it is, or who’s the president. Your children may well be older than you when you get back. This could be extremely inconvenient, to say the least. 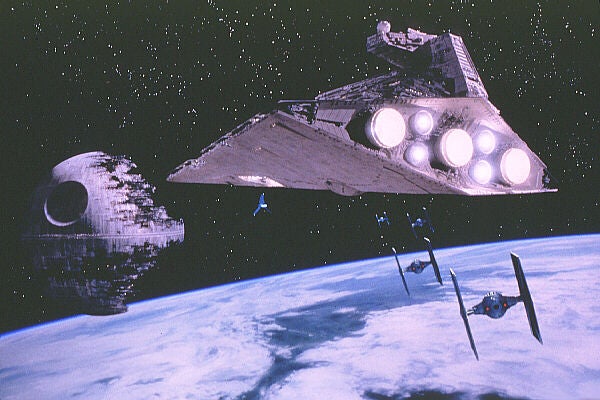 Star Wars is basically a swashbuckling adventure series set in space. These movies don’t pay a lot of attention to the asciencea in science fiction and violate many simple physical principles. An obvious and notable example (all too common in cinematic science fiction) is the constant bombardment of our senses with the anoise in space phenomenon.a We all know sound isn’t transmitted through a vacuum; nevertheless in every space scene, particularly whenever there is a battle, we’re treated to a variety of whooshing, zipping, screeching and crashing noises as the various star cruisers and fighter ships send out their next volley of weapons fire. However, George Lucas and his team of writers do recognize that to travel very far in a galaxy far, far away (without experiencing time dilation effects) they must have a way to get places quickly. Enter the aHyperdrivea. Using the HD, space vehicles are able to travel great distances through the galaxy very rapidly. And while the HD is never explained in any way, being simply a necessary plot device, perhaps we can try to justify its existence using Einstein’s theory of general relativity. Let’s look next at a science fiction film where they make just such an attempt. 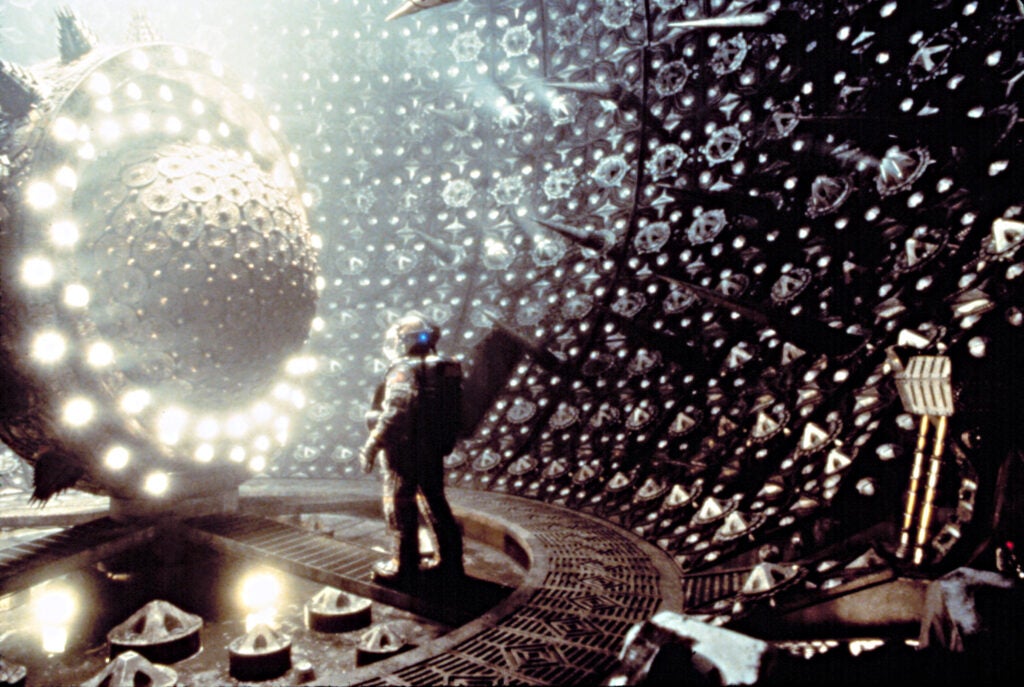 Event Horizon and the Horror of General Relativity

In the sci-fi horror movie Event Horizon, Sam Neill as the mentally unstable Dr.Weir illustrates how one might circumvent the limitations of special relativity with the following classic demonstration: Dr. Weir takes a flat piece of paper and marks two points on opposite ends such that they are as far away as possible. Then he bends the paper so that the two points are next to each other. He explains that if we could somehow do that to space itself, and if we could then jump across the shortcut, we would travel great distances across the galaxy in very little time without violating the special relativity speed limit of less than c. Well, Dr. Weir may be crazy but he’s not stupid. He obviously understands something about general relativity. General relativity says that mass actually bends space-time, and therefore it would be theoretically possible (if you were able to create a large enough gravitational field) to bring distant places in space-time much closer together. It sounds promising. However we still have a couple of big problems. One: any gravitational field strong enough to do that would completely destroy your spaceship. Two: it’s fairly incomprehensible to imagine how we could produce the enormous amounts of energy necessary. Three: unless you can find a way to connect the two points you might as well not have gone to the trouble. Nevertheless the ill fated star ship Event Horizon has managed to pull it off. (Unfortunately, it ends up in a region of “pure chaos” outside of the known universe where lots of really scary and unpleasant things happen to the crew.) 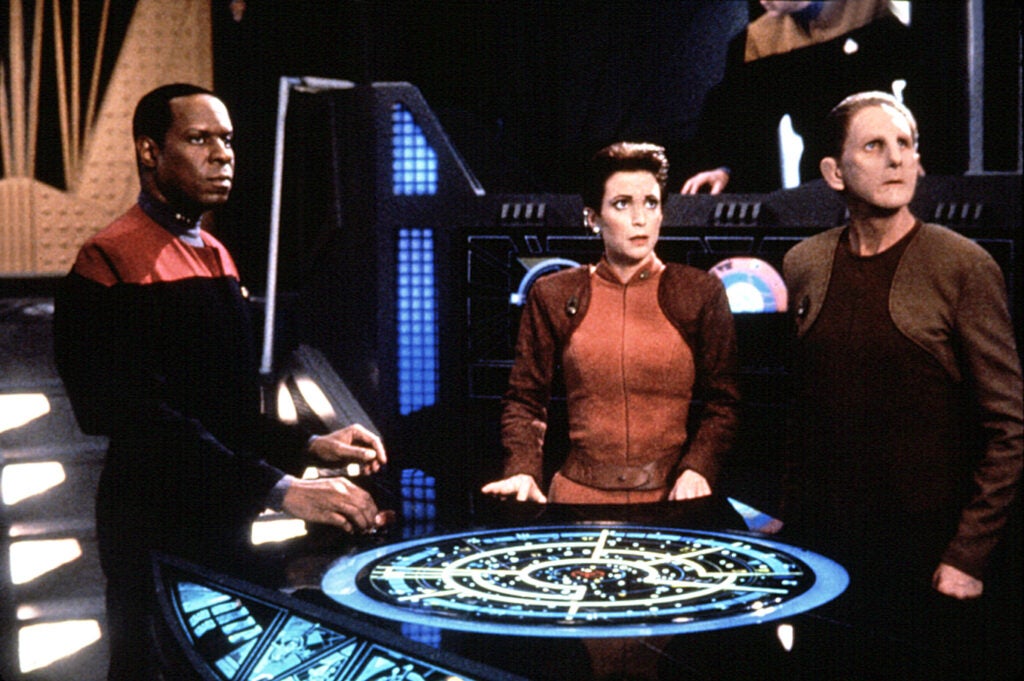 General relativity allows for things called wormholes which can form when two microscopic black holes join together connecting two different points in space and time–like the two points on our piece of paper aboard the Event Horizon. In the television series Star Trek Deep Space Nine the writers incorporate the idea as a major plot theme. Near the space station is a giant wormhole which connects distant parts of the galaxy. Is this a possible scenario? And could space travelers somehow create a “propulsion system” that works by generating worm holes and forming bridges to distant regions of the universe? Maybe. But not anytime soon. The fact that wormholes are actually microscopic singularities might be a difficult issue to contend with. And the fact that they only exist for infinitesimal fractions of a second would make it difficult to pass through one before being crushed to death in one of the constituent black holes. So let’s not use wormholes to get around. Let’s not even bend space—we might get hurt. It’s time to go to “Warp Speed”! 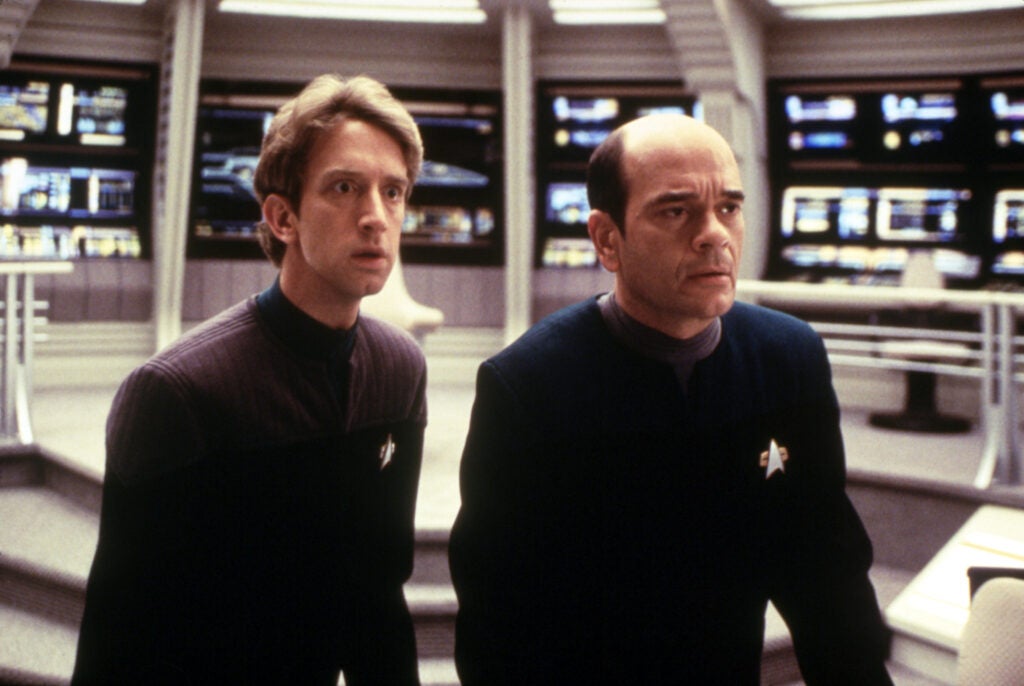 While much of what you see on the various spin-offs and movies that constitute the Star Trek phenomenon may be impossible physics justified by indecipherable techno-jargon, the writers do a commendable job of trying to incorporate real physics principles when they can. We give them kudos for giving it a shot. Instead of just throwing up their hands, they actually often pull interesting ideas out of the highly speculative forefronts of modern physical theories in an attempt to justify some technical plot device. We like this about Star Trek, and it is hardly a surprise that from its earliest inception it was our beloved Star Trek that instituted “warp drive” for getting around the galaxy. How might this work? General relativity suggests that it in addition to curving space it might also be possible to_ expand_ and contract space using gravitational energy. Previously on PopSci we discussed the concept of the (highly speculative and completely theoretical) “Alcubierre drive”. Physicist Alcubierre employs the equations of relativity to show how a device might be imagined with the ability to expand the space behind a ship, while contracting it in front thus greatly shortening a journey between two originally distant points in space. To do this however, we need to utilize “exotic” or negative energy—a kind of repulsive gravity. Now gravity as we experience it always exists as an attractive force between masses. Negative energy would result in masses repelling each other. Could such a thing exist? You certainly don’t talk about it much in your introductory physics class. However, in recent years astronomers have discovered that the expansion rate of the universe is actually increasing. Under normal circumstances we would expect the expansion rate to decrease due to all the masses attracting each other. Could this accelerating expansion be due to negative energy? We can hope. And we can take comfort in the idea that the “warp drive” may actually be the “Alcubierre drive” willed into being by futuristic generations 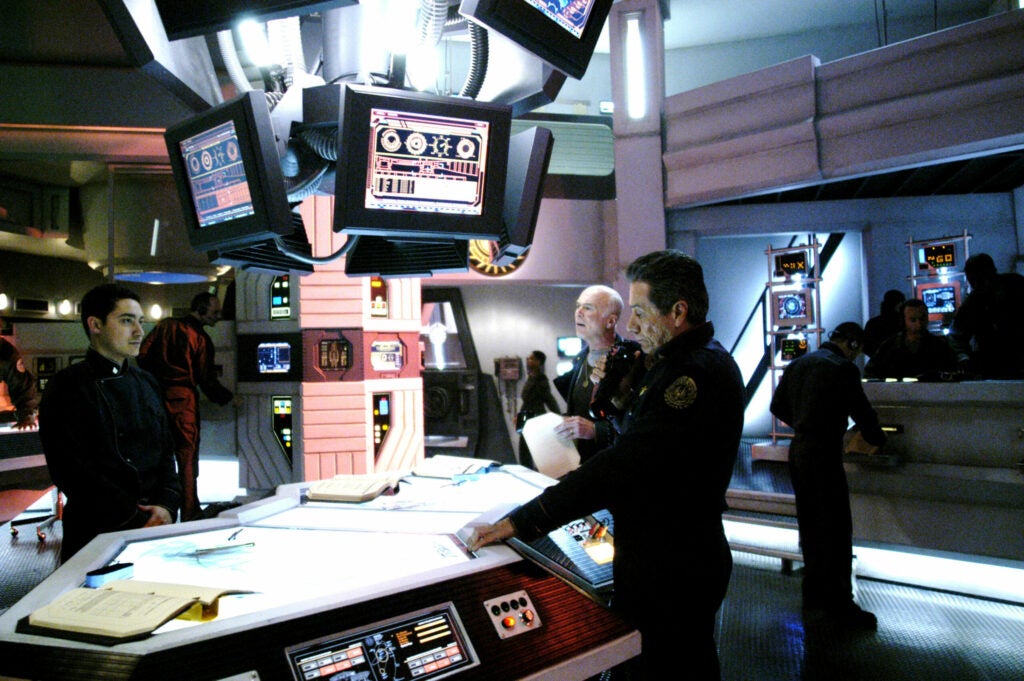 The highly popular television series Battlestar Galactica is the most current manifestation of the space adventure. The soap opera set in space follows humanity’s last survivors as they roam around the galaxy fleeing from the relentless “Cylons” who, having turned on their human creators, are now intent on destruction. Like in our previous examples BSG distinguishes between travel at sub-light speeds, and a “hyperlight jump.” When they need to get somewhere quickly Commander Adama orders the FTL (faster than light) drive into action. In a hyperlight jump the ship is able to move almost instantaneously from one region of space to another. Applying what we’ve discussed about general relativity, we might surmise that a “jump” consists of folding space-time and connecting the initially distant regions with an artificially manufactured wormhole. (If only they could harness the incredible amount of energy the FTL would require and use it as a weapon to destroy the Cylons.) What’s interesting here is that the crew of BSG isn’t confident of exactly where they’re going to end up after executing a jump. That makes for good drama. It might be difficult to calculate how to connect up specific distant regions of space-time under pressure. BSG has a science advisor; this doesn’t mean physics isn’t occasionally discounted for the sake of a cool effect or a convenient convention (for instance: as in most space travel sci-fi we have to assume some unknown method of producing artificial gravity on the ship so that the characters are able to walk around, and yes in BSG there is still sound in space although much more subdued than in the bombastic Star Wars movies), but does make for some interestingly accurate physics moments in the series. Look for them.
Entertainment & Gaming
hollywood science
movies
physics
Science