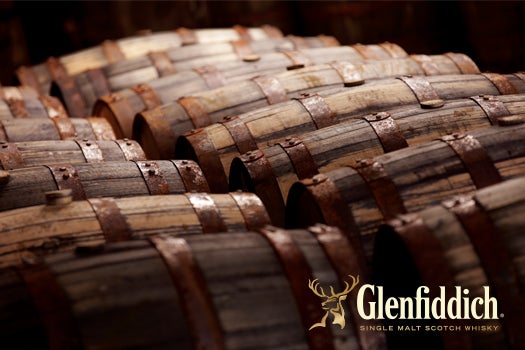 1886, with the help of his seven sons and two daughters, William Grant set out to fulfill a lifelong ambition. Together they began building his distillery by hand, and on Christmas Day of 1887, the first drop flowed from the copper stills. Today, Glenfiddich remains independently owned by the fifth generation of the same family. Each generation is driven by both their forefather’s vision to craft the finest malt in Speyside and the legacy that they will bestow on future generations.

Continuing in their pioneering spirit, Glenfiddich presents Age of Discovery. This malt, aged exclusively in first-fill bourbon casks for a minimum of 19 years, showcases the exceptional skills of Glenfiddich’s expert team of coopers who tend to the barrels and of Glenfiddich’s sixth Malt Master, Brian Kinsman.

To learn more about the fascinating world of single malts, visit
GLENFIDDICH.COM

New American oak barrels are used by distilleries in the U.S. to age bourbon and rye. Once these distilleries have aged their whiskey, the casks are shipped to Scotland. The first time we fill the barrels, they are known as first fill barrels. American oak imparts the whisky with compounds such as esters, lactones and phenols. One such compound, known colloquially as whisky lactone, produces a strong coconut flavor in the finished dram. Vanillin, another compound extracted from the oak, unsurprisingly contributes an aroma of vanilla. But because freshly charred oak has high levels of these aromatic compounds, casks made from it can overpower the more delicate flavors of a Speyside malt. Instead, Glenfiddich uses barrels that have already contributed much of the wood’s flavoring compounds to American bourbon. The result is a elegantly balanced dram with notes of warm, crunchy toffee, marmalade on toast and a whiff of a fine old orange liqueur, balanced by dry almost smoky notes of oak tannin.