Teens who experience racism are way more likely to smoke

The correlation is strong, but the causation is more complex. 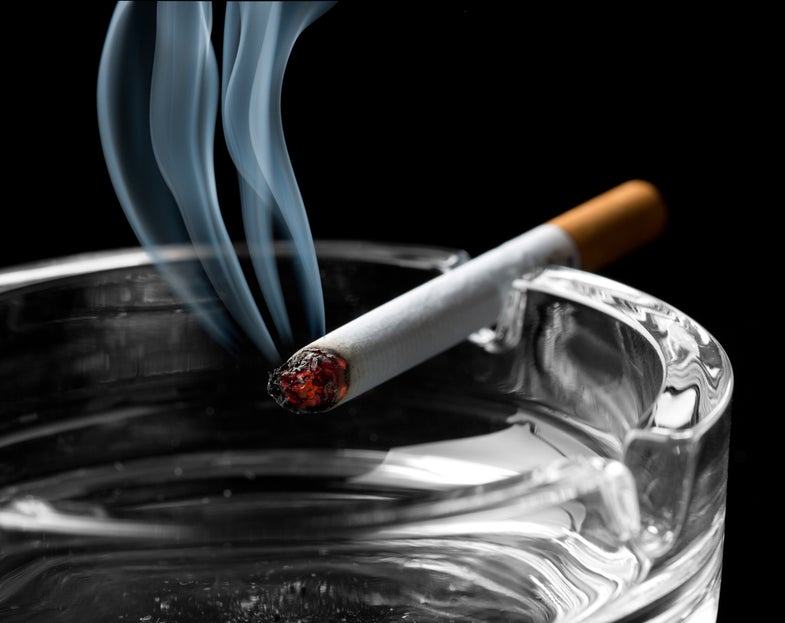 Closeup of cigarette on ashtray with a beautiful wisp of smoke. Sergiy Tryapitsyn
SHARE

A new study from researchers at King’s College London found that youth between the ages of 11 and 23 were 80 percent more likely to report smoking as a teen if they had experienced racism.

Of course, correlation doesn’t equal causation. While the link between stress-related racism and higher rates of teen smoking is high in this study, that doesn’t mean that stress-related racism definitively causes teen smoking. But the study’s findings fit into a well-established topic of research, says Enrique Neblett, a professor at University of North Carolina, Chapel Hill, and lab director of its African American Youth Wellness Laboratory.

And even if the physical toll of dealing with racism doesn’t actually drive young people to smoke, there is most certainly a sinister racial component to the teen smoking problem.

The effects of stress on the body—including stress directly caused by racism—can be measured by physical indicators. That tension isn’t just in your head: getting pulled over by a cop, experiencing extra security at the airport, and even school- and workplace microaggressions can be felt in your heartbeat, blood pressure, and sweat glands. For example, your body naturally releases cortisol and other hormones to jumpstart a flight-or-fight response in potentially harmful situations. When you’re out of harm’s way, your body is supposed to naturally adjust, and your hormones should return to normal levels. But if you experience chronic stress, or a feeling of fear that never seems to go away, that natural regulatory system gets worn down.

“Over time, the body sort of breaks down from these constant incidents of stress, which includes racism,” Neblett says. Eventually, that leads to increased susceptibility to other diseases and might even weaken the immune system. An investigation published by ProPublica in December found the levels of stress and racism that black women experience during pregnancy may be linked to higher rates of maternal mortality rates. Even women who came from higher socioeconomic statuses died more often than expected based on income level and access to resources.

“A lot of research that’s been done focuses on interpersonal experiences [of racism], but by focusing on individuals, we give the larger system a pass,” says Neblett.

In the United States, that includes a long, clear history of the tobacco industry aggressively marketing harmful tobacco products to black communities and other minorities.

In 1993, a New York Times columnist recalled a tobacco executive scoffing at the idea that he himself smoked the cigarettes he’d undoubtedly made millions off of. “Are you kidding?” the executive said. “We reserve that right for the poor, the young, the black, and the stupid.”

Today, African Americans are more likely to smoke the most addictive and dangerous types of tobacco products such as menthol cigarettes. Like the cough drops and cold medications that contain the minty essence, menthol in cigarettes cools and relieves the throat.

That makes the harshness of tobacco smoke much more palatable, says LaTroya Hester, the director of communications for the National African American Tobacco Prevention Network.

“It makes it easier to start smoking,” she says, “and it makes it more difficult for you to stop smoking.” It’s also easier to inhale the cigarette smoke, since menthol masks the flavor. That means more harmful chemicals are absorbed by the body, according to the Centers for Disease Control and Prevention.

Menthol cigarettes accounted for 26 percent of all cigarettes sold in the US in 2015, per CDC data. But among African Americans, nine out of every ten smokers over the age of 12 prefer menthol. And despite reporting more attempts to quit smoking, African Americans have a lower rate of success than white Americans.

Tobacco companies have explicitly marketed menthol products to African Americans, and continue to do so. While the Marlboro Man might be one of the most infamous examples of Big Tobacco’s attempt to make their cancer-causing products look cool, Hester says that the campaign in particular didn’t appeal to black audiences.

Instead, the industry exploited images that riffed off of the 1970s black power movement. Brands like Kool, Hester says, “used African Americans wearing afros who were unapologetic about their blackness. It was a very progressive campaign, and when they decided to market menthol, they did it aggressively and in a very calculated way.”

It’s been illegal for tobacco companies to advertise their products on TV since the 70s, but other advertising mediums aren’t as heavily restricted by the federal government. “When you’re looking specifically at the black community, that’s when you start to see it,” says Hester. “You start to see the billboards, you’ll see advertising in magazines like Essence and Ebony.”

In 2009, the FDA came close to banning all forms of flavored cigarettes nationwide. The bill that eventually passed was heavily lobbied by the tobacco industry, and explicitly excluded menthol products.

NAATPN has since worked at the grassroots level to raise awareness about the dangers of menthol cigarettes and worked at the local level to implement bans and restrictions, community by community. So far big cities including San Francisco and Minneapolis have approved such legislation. Yet the tobacco industry always seems to be a step ahead.

“Every time we come to the table with a community or policy makers, somehow the tobacco industry shows up and starts to try to thwart our efforts,” Hester says. “They put in the mind of communities that a ban on mentholated products would criminalize African Americans, if they sell them as loosies,” she says.

Organizations like the National Organization of Black Law Enforcement Executives have adopted that stance publicly. And the image is potent—in 2014, New York policemen put Eric Garner, a black man, in a chokehold, eventually suffocating him to death as he told them, repeatedly, “I can’t breathe.” Garner’s crime? Selling loose cigarettes on the sidewalk.

The truth in that parallel can be debated, but one of NOBLE’s sponsors is Reynolds American, a prominent tobacco company. They sell Newport cigarettes, the most popular menthol brand in the nation.

“Almost all minorities—Native Americans, LGBTQ communities, African Americans—all have higher smoking rates than the general population. That’s just not a coincidence,” Hester says. “We know that the tobacco industry is first and foremost concerned about making money, and I can only conclude that they see certain groups as expendable. That’s why we consider this to be a social justice issue. Something has to be done about this.”