FYI: What Would Happen If You Got Zapped By The Large Hadron Collider?

It would burn a hole through you—and then some. 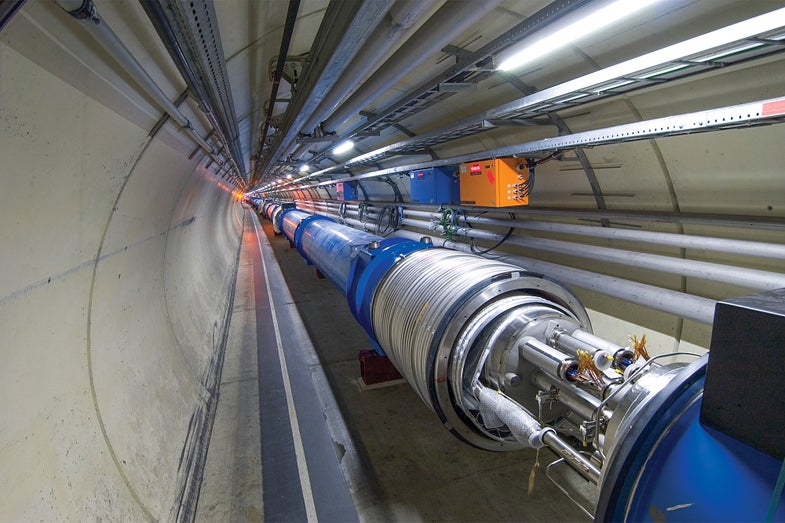 The scientists at the LHC would like to make two things very clear. First, it’s just a horrible idea to put any part of your body in front of the collider’s two proton beams. Each beam comprises 320 trillion particles, so the total energy delivered is a blazing 362 megajoules, enough to melt about half a ton of copper. Second, it would be really hard to get in front of a beam, even for someone with a death wish. “If you tried to open any of the access doors to get into the LHC—even though the lights are flashing et cetera—the collider automatically turns off,” says Steven Goldfarb, a physicist at the LHC in Switzerland.

That said, let’s assume you did manage to squeeze your face inside the collider. What would happen next is unclear. Physical damage would depend upon how many protons collided with nuclei in your flesh and how many zipped through undisturbed, like plankton through a net. Were the beam spitting out single protons, there would be little chance of impact. Considering there are 320 trillion, though, the beam would almost certainly burn a hole through your face. The question is what might that hole look like? When protons smash into a target, a block of copper, say, they fling off secondary particles in different directions, which can themselves incite another round of collisions. As a result, beams create a hole that spreads out laterally the deeper it goes. The same could happen to your body: Rather than boring a hole a few microns wide, a beam might carve out a large cone of tissue.

The only precedent scientists have for a collider injury occurred in 1978, when a 36-year-old researcher named Anatoli Bugorski managed to get his head in the way of the proton beam in the U-70 synchrotron in Russia. (That machine was just one hundredth as powerful as the LHC.) According to journalist Masha Gessen, who interviewed Bugorski for a 1997 article, the zap burned a hole from the back of his head to just beside his left nostril and left him with facial paralysis and epilepsy. (There’s no indication of the exact shape of the hole.) Remarkably, Bugorski was able to continue working as a scientist after recovering from the initial trauma.