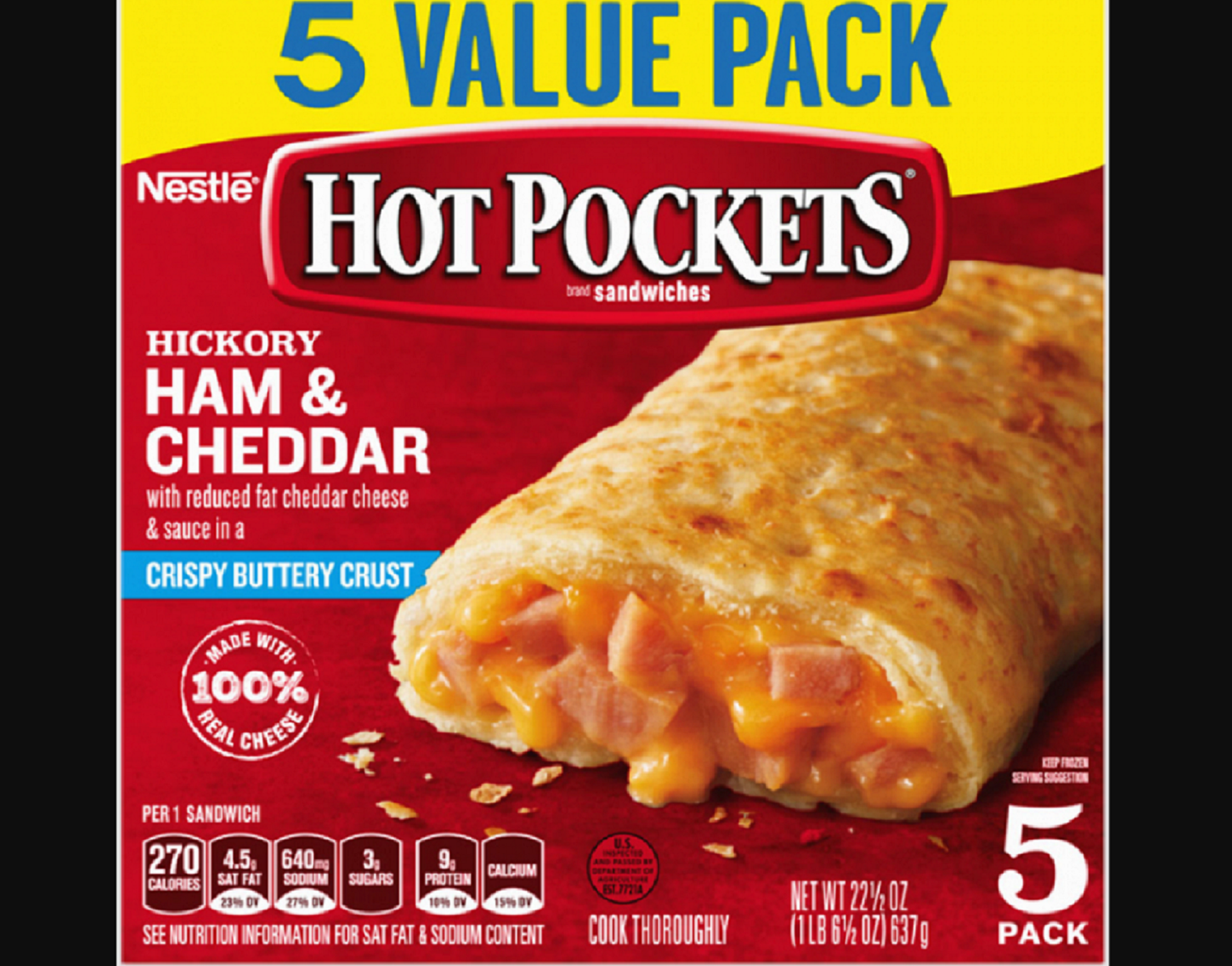 This story originally featured on Mel.

I don’t like to waste food. For whatever repressed childhood reason, a wave of guilt washes over me when uneaten food goes into the trash. This can have its benefits—like when I make banana bread from overripe bananas—but it also has drawbacks. Which is why I can sometimes be found eating cold dinosaur chicken nuggets after my daughter becomes full after a single stegosaurus.

Things were no different during this past school year. When my daughter was learning virtually, her school district sent home what would have been her school lunches. There was good stuff in there—like little boxes of cereal and fresh fruit—but there were also less appetizing things, like frozen mystery meat and off-brand Hot Pockets, the latter of which is where this journey begins.

See, out of general childhood pickiness—or, perhaps, extremely wise judgement—my daughter refused to eat the school Hot Pockets, so it was my job to have them for lunch a couple of times a week. They weren’t terrible, but they lacked the savory, salty richness of real Hot Pockets. This got me hankering for the real thing, but when I went to my local grocery store, I was sorely disappointed. There were a handful of flavors—like, a dozen—but some of my favorites from my childhood and bachelor days were missing. Where was the sausage pizza flavor? Where was the rectangular dough sack stuffed with a chili cheese dog? Almost all the classics were gone, so I decided to try to make them myself.

I did a little research and pinpointed five discontinued Hot Pocket flavors to try my hand at. For guidance, I turned to Mythical Kitchen’s Josh Scherer, who’s a bit of a Hot Pocket expert and is well versed in recreating discontinued foods. My goal wasn’t to try to make phony, gourmet Hot Pockets—people have done that before and that didn’t interest me. Instead, I wanted to get as close as possible to recreating actual Hot Pockets, and that meant getting cheap, generic ingredients from Walmart and subjecting the pockets to two rounds of cooking (once in the oven, and once in the microwave). The results were mixed, but there were some surprises—both pleasant and otherwise—along the way.

Most of the Hot Pockets I tried to recreate were ones I’d had before, but I also wanted to make some I’d never had, which is why chicken and cheddar was on the list. During my research, I’d found a 1990s commercial from my youth that made mention of the chicken and cheddar Hot Pocket, but a commercial from the next year no longer promoted the flavor. That would seem to indicate it was removed from the market rather quickly.

I also failed to find any pictures of the chicken and cheddar Hot Pockets online, so I was forced to guess at its appearance. Most chicken Hot Pockets feature little cubes of chicken, which Scherer said could be best recreated by very thick deli meat chicken, or chicken of the canned variety. The latter suggestion repulsed me, but I figured it was probably on the money as to the quality of Hot Pocket chicken, so I bought two cans of Great Value brand canned chicken.

As soon as I opened the can, I could not stand the stench. It smelled like straight-up cat food, and it looked even worse. Scherer didn’t tell me to do this, but I strained and rinsed the chicken just to cut down on the odor. It helped—a little.

For cheese, I went with Cheez Wiz to recreate that gooey, delicious fake cheese flavor from the ham and cheese Hot Pockets. Some of you might scoff at Cheez Wiz, but I stand by this product. It was a staple of my childhood, and it’s the proper way to eat a Philly cheesesteak. Go f*** yourself if you think you’re too good for it.

For the dough, I’d originally had the idea of surgically opening thawed Hot Pockets and scooping out the contents, then replacing them with other ingredients. Scherer cautioned me against that, saying that it might disrupt the delicate balance of a Hot Pocket, and that the new ingredients may seep out of the unsealed hole. Instead, he recommended using Pillsbury French bread dough—or the generic equivalent—but my Walmart was out of it, so I went for biscuit dough instead. For each Hot Pocket, I used two biscuits worth of dough and flattened them out. I then heaped on the cheese and chicken, folded it up and tossed it on a baking sheet.

I remembered this flavor from the 1990s, and I was excited to recreate it. That said, when I found an image of the old-school box online, I couldn’t help but be offended by it. Seriously, just look at how gross this is:

For the meat stuffing, Scherer said to mix the chicken with barbecue sauce and some cornstarch, allowing it to congeal into a semi-gelatinous state. I failed to ask him how much cornstarch to use, so I just eyeballed it. After that, I folded up Hot Pocket number two, tossed it on the cookie sheet and put both food tubes in the oven at 350 degrees for 10 minutes.

Unfortunately, I didn’t fold the barbecue one well enough and it opened in the oven. I didn’t want to make it again, so I squeezed it shut, wrapped them both in aluminum foil and tossed them in the freezer. Part of me was tempted to just cook them in the oven and eat them right then and there, but the real test would come 24 hours later with a second round in the microwave.

See the rest of the daring experiment (with two other terrible Hot Pocket flavors) over at Mel.