The four best ways to cook a burger

Use these Saveur Test Kitchen-approved methods to impress your friends and family. 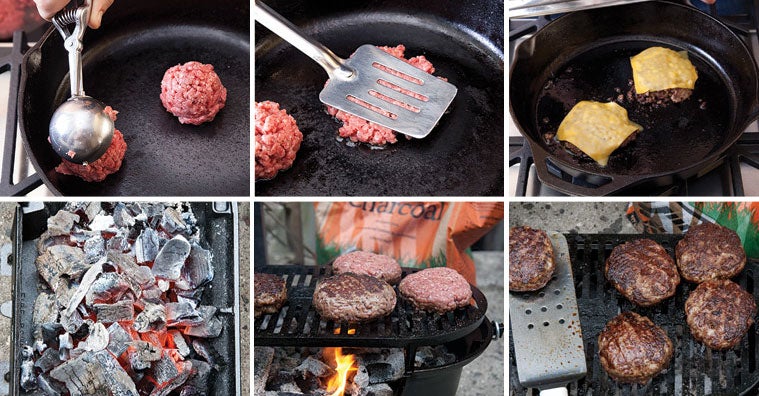 Smashing the burger down with the back of a spatula creates those crispy, craggly edges beloved by American diner-goers, while charcoal grilling is the gold standard in burger-cookery. André Baranowski
SHARE

Whether you’ve got a single skillet or a fully stocked kitchen—or perhaps you’re just itching to light that new grill—there is a burger method that’s right for you. Below, we break down the best ways to cook burgers on the stovetop, in a toaster oven, over the grill, even how to steam the patties. Once you’ve mastered your preferred method, check out our Ultimate Burger Guide for our favorite recipes, toppings, tips, and sides.

Cooking burgers on the stove

A well-seasoned cast-iron skillet is the ideal tool for making thin, diner-style burgers. The wide, shallow pan mimics a restaurant-style flat-top griddle by generating a high, dry, even heat. George Motz, the author of Hamburger America, recommends a method popular with short-order cooks in the Midwest. Here’s his technique for how to cook a cheeseburger in a pan:

This is our favorite rainy-day (or city apartment) technique for achieving results similar to what you’d get with a charcoal or gas grill. We prefer to use the broiler setting on an electric toaster oven, rather than a full-size oven, because the small appliance’s compact cooking space concentrates the heat more intensely on the meat. (If you don’t have a toaster oven, though, a standard oven will get the job done.)

Cooking meat over an open flame will always yield some degree of savory, smoky flavor. We especially like to cook burgers (and other smaller cuts of meat) over a compact charcoal grill, like a traditional hibachi or the Lodge Sportsman, on which the grates sit close to the heat source, making it easier to achieve a crispy, charred exterior.

At Ted’s Restaurant in Meriden, Connecticut, owner Paul Duberek sells hundreds of his famous steamed white-cheddar cheeseburgers a week. It’s a burger-cooking style that hasn’t found much of a fan base outside the state, but steaming at home is easy, smokeless, and can produce winning results, as the meat stays moist while it cooks in its own juices. Though you probably don’t have one of Duberek’s patented steaming cabinets at home, our MacGyvered tuna-can method works wonders.