Add the flavor of fire without getting too fancy. 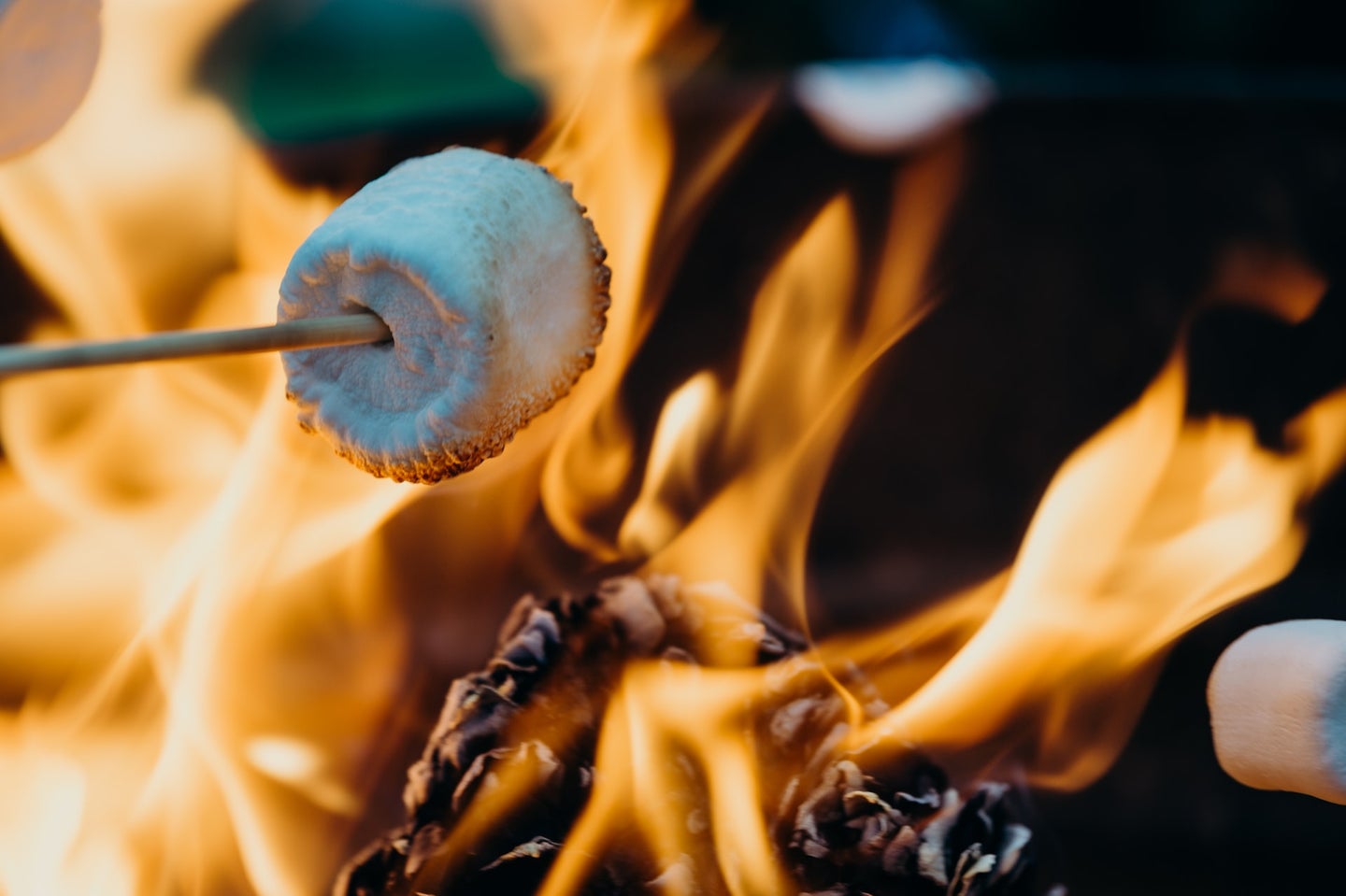 Use a fire or even the essence of one (cocktail bitters, anyone?) to make smoky desserts. Leon Contreras/Unsplash
SHARE

This story originally featured in Saveur.

A crafted confection arrives at the table as the final course, covered in a glass cloche filled with swirling smoke. As the server places the dish on the table, they lift the cloche and pungent smoke escapes, wafting around the dessert. It’s dramatic and heady stuff, obscuring the boundary between sweet and savory; the smoke creates a delicious yet surprising effect.

The tableside smoke technique is by now ubiquitous in upscale restaurants. And while the performative presentation might be a little over-the-top for the average home cook, adding smoky flavors to desserts is definitely doable, no bell jar required. Here are five ways to do it.

The most obvious way to incorporate smoke flavor into sweets is, of course, by employing actual fire and smoke. No smoker? No sweat. It’s easy to grill a variety of fruit—from pineapple to citrus to stone fruit. From there, imparting smoky flavor into your dessert recipe is a snap.

Some simple grilling guidelines to remember:

An offset smoker lends itself to experimenting with smoking chocolate, fruit, fats, and spices, which can also result in some fun additions to your pastry pantry. Chef Nathan Brand of Timber! In Johnson City, Tennessee, takes it a step further and uses his offset smoker to smoke vanilla ice cream base.

“We really consider this a bullet-proof recipe at the restaurant,” he says, despite the counterintuitive nature of the idea.

The key to Brand’s technique is in his formula. He starts with an eggless (“Philly-style”) base, which he then smokes for an hour or so over pecan wood before freezing. If the base included eggs—as custard-style ice creams often do—the proteins would “scramble,” or begin to cook in the heating milk, resulting in something miles away from a smooth, creamy bite. Brand’s Philly-style base allows him to impart plenty of smoke flavor in a smooth, finished ice cream.https://08d30590a5b6dd41c464df8d063acd51.safeframe.googlesyndication.com/safeframe/1-0-38/html/container.html

“Every time I see a guest take that first bite,” he explains, “the look of surprise and joy on their face tells me it’s the perfect way to end a nice meal.”

However, a grill or smoker isn’t the only way to add smoky flavor to sweet treats. Chef Rebecca Masson of Fluff Bake Bar in Houston takes a decidedly Texan approach to caramel candies, swapping out the traditional butter with rendered smoked brisket fat sourced from her neighbors, the legendary Houston barbecue joint Feges BBQ.

“Fat renders off when they’re smoking the brisket, so they have lots of the stuff, and you just have to know to ask for it,” Masson explains, “I get it in quart containers, and when I open it up, it’s just so smoky.”

Like all beef suet, brisket fat is a little denser than pork lard (including bacon fat), which has a lower melting point, but either can be used in caramel and beyond as a substitute for shortening, lard, or up to half of the butter in cookies and pie crusts. Check in with your local barbecue restaurant for smoky fat, or render and strain your own at home.

Smoked spices and salts can add complexity and dimension to any pantry. To add a simple smoke note to desserts, look to smoked sea salts; a pinch of the flaky crystals added to chocolate chip cookies, brownies, or fruity hand pies balances sugary sweetness with a pop of smoke and salinity. Smoked cinnamon is also a great and widely available option, while black cardamom, which can be found online or in your local Asian grocery store, has a particularly heady perfume.

Dubbed “the bacon of spices,” by writer Max Falkowitz, black cardamom is a relative of the more common green variety, and while the two share some flavor notes, the larger black pods, which are widely used in North Indian and Chinese savory cooking, are dried over a smoky fire—a process which infuses the ingredient with bold and smoky depth.

Cheetie Kumar, chef and co-owner of Garland in Raleigh, North Carolina, bucks tradition by also adding black cardamom to sweet foods and beverages, including chai. “Anything with dairy fat is wonderful with it,” she explains, “The husk holds all the smoky flavor and the seeds provide the menthol quality, and you get this really round, smoky nuance.”

Kumar particularly likes to add black cardamom to fall and winter fruits like apples, and in the warmer months, she suggests sprinkling it over watermelon or incorporating it into compound butter for brushing over grilled apricots.

A final method, straight from the bar cart, lends the dessert course a smoky element with ease. Toss seasonal fruit, such as peeled and pitted ripe peaches (any locally-grown variety, from Lemon Cling to late season O’Henry, will do) with a few drops of smoked cocktail bitters. (We’re partial to the smoke- and salt-flavored “Pooter” bitters from Crude Bitters and Cocktail Punk’s Smoked Orange Cocktail Bitters.) Roast in a single layer on a rimmed baking sheet in the oven at 350 degrees Fahrenheit until the fruit just begins to soften; the resulting quick compote can be served atop granola, ice cream, or pound cake to add a sweet and smoky surprise at the meal’s end.