A food scientist explains the do’s and don’ts of the ultimate melted cheese sauce. 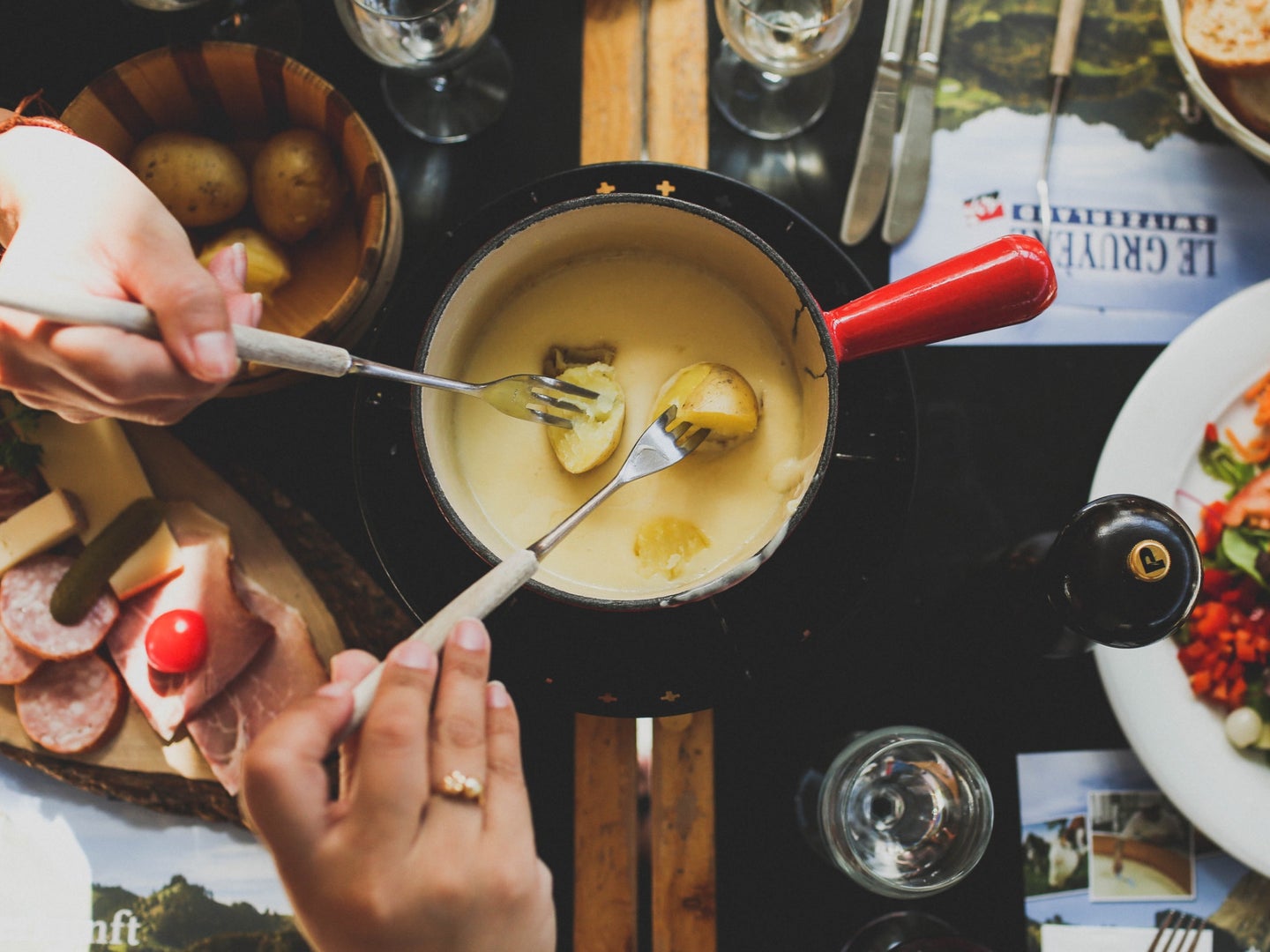 Can you think of a better way to bring people together than around a pot of melty cheesy goodness? Although fondue has its roots in the Alps, we’ve embraced it as an undeniable mainstay of party-going Americana. The dish rose to prominence in America during 1950s and 60s, and is still in vogue to this day due to its inherent “#gram-ability.” Simple in concept but often problematic in execution, understanding the science of fondue is the key to unlocking its full potential.

A well-made fondue is what food scientists would call an emulsified cheese sauce. It’s “emulsified” because an emulsion is formed when you make fondue. An emulsion is a stable mixture of two substances that normally don’t like to be mixed—like oil and water. Anyone who has witnessed an unsightly oil slick atop a broken hollandaise or a pot of fondue has seen evidence of a failed emulsion.

The stars of the show

So where do the components of our emulsion come from? Let’s look at the ingredient list of a common fondue recipe: Emmental and Gruyère cheeses are the usual standbys for a classic Swiss fondue. These cheeses are moderate in acidity, moisture, and fat content, making them perfect showrunners for fondue. A crucial element here is that these cheeses aren’t years and years old. As cheese ages, its protein (called casein) breaks down. That protein is needed to form the fondue’s gooey structure and also to hold onto all of the cheese’s delicious butterfat. A five-year cheddar, although tasty, will result in an overly oily fondue because its casein has deteriorated too much to form a cohesive melted mass.

So what cheeses can you use aside from the Alpine classics? Younger goudas, Fontina, and even Colby can be used with great results. Just make sure you pair young mild cheeses with a stronger more robust variety. The classic duo Emmental/Gruyère does this well.

Next up we have wine—specifically white wine, which adds much-needed flavor and moisture to our fondue and dilutes our melted cheese into a cohesive, pourable mixture. White wine is important for more than just stylistic reasons—it also contains high amounts of tartaric acid. Tartaric acid alters the structure of the casein protein in cheese and allows it to hold onto the fat better, which emulsifies our fondue. The citric acid naturally present in lemon juice, another classic fondue ingredient, accomplishes a similar feat.

Cornstarch can be added to thicken and stabilize the mixture a bit and also aid in forming the emulsion, whereas garlic, kirsch, and nutmeg are often added to round out the flavor of fondue.

If you’d like to play chemist in the kitchen, you can add a sprinkle of sodium citrate, which greatly improves the emulsion, and even allows you to use non-traditional cheeses. Aged Gouda and blue cheese fondue? Yes, please! Sodium citrate is a form of citric acid, which is derived from citrus fruits. It can be purchased online or in some grocery stores in the canning section under the name “sour salt.” This serves a similar purpose as the aforementioned tartaric acid in white wine, except on steroids. dissolve about 1 teaspoon of sodium citrate per pound of cheese in a splash of wine or water before adding to the mix and you’ll be left with a perfectly melted fondue every time.

What hardware do you need to make this happen? An enamel-coated cast iron fondue pot ensures slow and even heat distribution, which helps prevent scorching. No matter which pot material you choose, be sure it can be used directly on the stovetop. Starting a fondue on the stove and then setting it over an alcohol burner on the table is the best way to make and maintain a smooth and emulsified fondue. And don’t forget a nice wooden spoon! You must make the emulsion after all, which means vigorous stirring to get that fat evenly distributed.

Once your emulsified cheese sauce (i.e. fondue) is made, you’ll have to assemble accoutrements for dipping. The old standbys—cubed bread and crunchy veggies—are always appropriate. If you’re looking for something a little different, slices of cured meats or kettle-cooked potato chips are fun twists.

Where does this leave us? Sitting around a warm, gooey pot of emulsified cheese sauce of course! No matter how your fondue turns out, you’ll be all the better for it.