11 dried Mexican chiles to know and love, plus how to use them

A beginner’s guide to the pantry workhorse of Mexico. 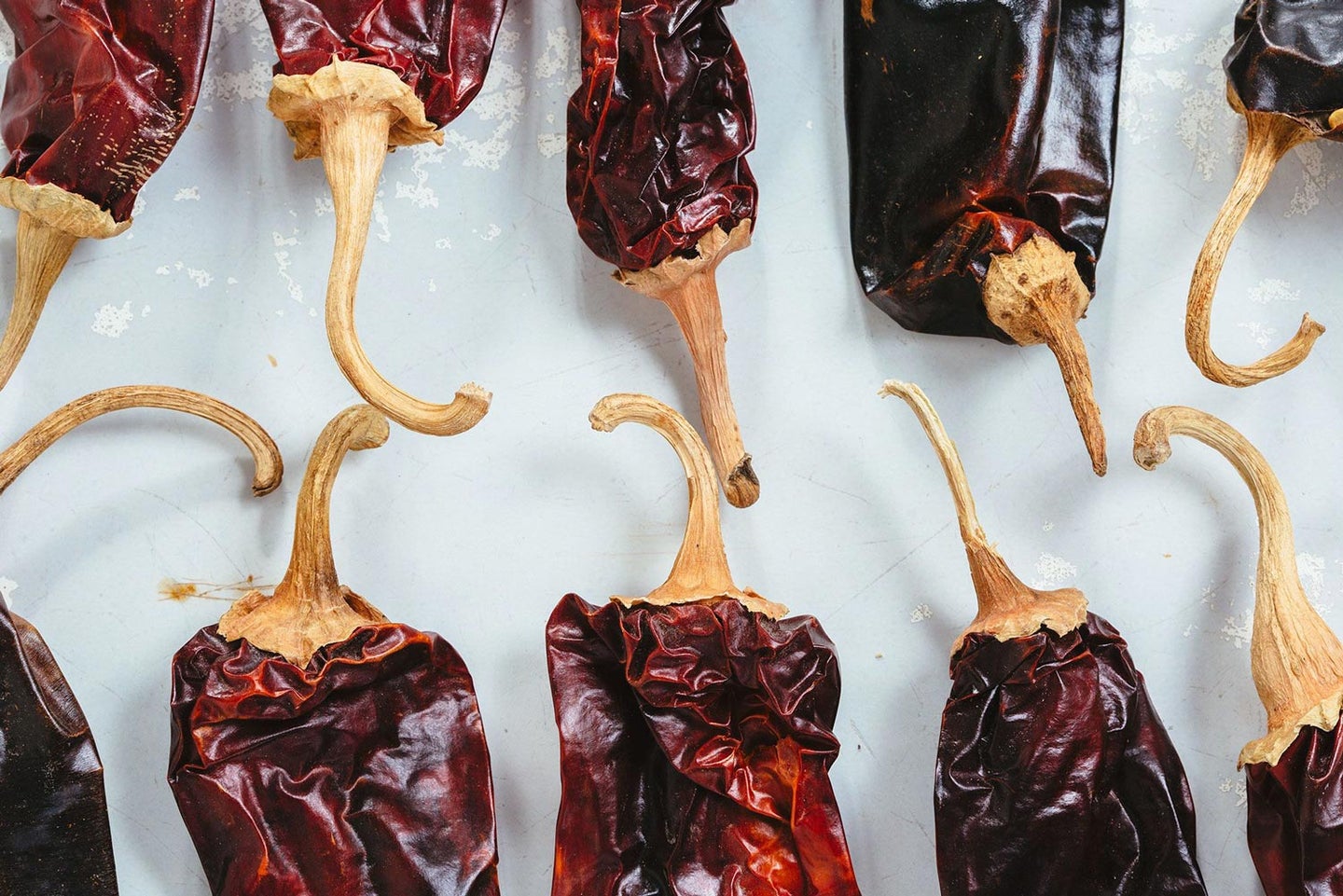 This article originally featured on Saveur.

When you think of Mexican chiles, you likely first conjure up the fresh, spicy green kinds—jalapeños, serranos, and poblanos. But in our cookbook, Nopalito, we make the case for why dried chiles—which often occupy an entire wall at Mexican markets—are the cuisine’s true workhorses.

Fresh peppers are great for adding color, crunch, and heat to a dish, but it’s the dried versions that offer the most surprising and complex flavors, from smoky to spicy, to citrusy, chocolaty, earthy, and mushroomy. They range from punishingly spicy to sweet and pruney, and the colors from bright, orangey-red to deep purple-black.

In Mexican cuisine, it’s traditional to use combinations of chiles to make salsas (see Gonzalo’s empanadas) and adobos (a generic term for a paste made with reconstituted and puréed dried chiles), the latter of which can be stirred into braising liquids, soup broths, masa for tortillas, and marinades.

The variety and at-times opaque naming conventions of Mexico’s dried chiles can get overwhelming—dozens to choose from; sometimes named after their fresh counterparts, sometimes not—but all it takes is a little experimentation. Here’s a guide to help you shop for them and make the most of them in your kitchen.

Shop by color and size

Dried chiles can be roughly organized into two camps: red and dark. Red chiles (which can range from bright orange-red to deep maroon) will likely have tropical fruit flavors, good acidity, and varying degrees of spice (when in doubt, smaller chiles tend to be hotter). They pair best with white meats such as poultry, pork, and fish. Dark chiles, which range from rusty red to dark plum, are typically chewy and sweet with flavors of dried raisins and prunes and are used mostly for color (as in moles). These pair best with dark meats like beef or duck. Dried black chiles, which have a sweeter, earthier flavor, pair best with dark meats like beef or duck.

Many dried chiles have thick, bitter, or spicy seeds; remove them to make smooth, balanced purées and have more control over the heat. To dislodge seeds, snap off the stems or split the flesh lengthwise with a paring knife, then shake or scrape away the seeds.

Skip grainy chile powder for lush chile puree; dried chiles have tough skins and need to soak in boiling water for about 20 minutes before they can be broken down in a blender to release their full flavor. An optional step to take beforehand: fry them in a thin layer of vegetable oil for 30 seconds to bring out their full color and brightest flavors, much like toasting spices in a pan before grinding them.

Red chiles typically have bright colors, tropical fruit flavors, a good amount of acidity, and varying degrees of spice. They pair best with poultry, fish, and other light or lean meats. These are ranked from mildest to hottest.

One of the most common chiles in the Mexican pantry with a crowd-pleasing flavor—a mix of earthy and sweet, and typically little to no heat. They’re large, so a few go a long way to add body to adobos, stews, and sauces.

Guajillos combine well with other chiles and tomatoes without overpowering them with spice or smokiness. Because of their thin but tough skins, they need about 20 to 25 minutes of soaking time in boiling water when reconstituting from dried.

Puya: Similar to guajillos but smaller and spicier, earthy, fruity but with some acidity and medium heat.

The puya is basically a smaller, spicier version of the guajillo. They’re bright red with thin but tough skins, and because they’re quite dry, they take well to toasting. Once they’re toasted, you can cool them and grind them into a chili powder for sprinkling onto foods to add a dose of heat, or add them to stews, braises, and sauces like you would with guajillos. Just add them a little at a time and taste so as not to overdo it.

The chipotle is actually a smoked,  dried version of one of Mexico’s most common fresh chiles, the jalapeño. They’re red because they are picked at the end of the ripening process, but the smoking and drying process can turn some chipotles an ashy, brown-tan color.

Chipotles have a medium heat, and are known for their distinct smokiness and earthy flavor. By simply soaking chipotles in boiling water, then blending with a few tomatillos, you can have a simple, medium-heat salsa to dip your chips in.

The árbol is a versatile chile. It goes with everything, and its flavor changes depending on how it is handled—toasting and frying it before soaking it, for example, intensifies its heat and nutty qualities. However you use it, this slender fruit packs a big punch in both spice and earthiness. Look for chiles de árbol with stems (rather than crushed or preground) for the best flavor.

Also called the bird chile, pequins are tiny little chiles that will shock you with their heat. They are great for sharp, spicy salsas and hot sauces, combined with vinegar or tomatoes to tame some of the heat and add sweetness.

Small but substantial chiles that are great to have on hand. They add both smokiness and a decent amount of heat to salsas and sauces. Because of their dried fruit–like sweetness and heat, they fall somewhere between dark and red chiles and are often added to dark moles such as mole poblano or Oaxacan-style moles to add a little heat without taking away from the dark color of the mole.

Dark chiles, which can take on tones of deep purple or jet-black, tend to be thicker, chewier, and moister than red chiles, with the sweet ripe flavors of raisins and prunes. Most aren’t that spicy—they’re used more for their color, sweetness, and sometimes smokiness. These are ranked from mildest to spiciest.

This chile is very dark, nearly black, and is used frequently in making mole negros. The chile negro is used and loved more for its color than for its flavor since its taste and heat level are relatively mild. Keep an eye out for aliases: pasillas negros, pasilla chiles, or chiles Oaxacas.

Mulatos, like anchos, are a relative of the poblano chile, and have a similar smoky-sweet profile, especially when charred. However, they are darker than anchos with a brownish-purple tinge.

Mulatos are thick, meaty chiles, so they make a great addition to moles, pozoles, and other dishes where they can be blended into adobo or thick paste to add body, intense ripe fruit flavors, and dark colors to a dish.

The cascabel (pronounced “kas-ka-bell”) is a round, hollow chile, and its name comes from the Spanish word for rattle (it is shaped like the end of a rattlesnake’s tail, and the seeds noisily rattle around inside the dried chile when it is shaken).

What it lacks in heat it makes up in strong aromas and an intense fruity sweetness reminiscent of tropical fruit. A great choice for when you want a chile with flavor but not much heat.

The ancho is a poblano chile that has been ripened to a deep red, then picked and dried. Its spice level fluctuates depending on the individual chile, but in general, the ancho has mild to moderate heat.

Anchos are particularly good for marinating meats as part of an adobo (chile paste), or you can stir some ancho adobo into masa to give a small kick of heat and beautiful dark red color.

The pasilla is named after the word for raisins (pasas) on account of its deeply sweet dried fruit flavors and wrinkly, dark appearance. Compared to the ancho, the pasilla’s texture is a bit tougher, and its heat more intense. They are combined with chiles mulatos and a few dried red chiles in Oaxacan-style moles to create a perfect blend of color, sweetness, and a little spice.