My second grade teacher had a pair of supermagnets. She wowed us with them one day, lifting a metal barstool by just holding onto the tiny silver nub. We were allowed to play with them only when closely supervised. Apparently, a couple years back, a girl had pointed one magnet at the other from across a table, and it had zipped up and hit her in the face.

Magnets are good for more than impressing and/or injuring children, though. A stroll through our archives reveals magnets powerful enough to lift not just a barstool, but seven full-grown men, and being used for help, not harm, as a scientist devises a way to test for poisons in the bloodstream using magnets.

Peruse our gallery to learn more about those, plus discover some at-home experiments, a magnetic refrigerator that can almost reach absolute zero and some very pretty ferrofluids. 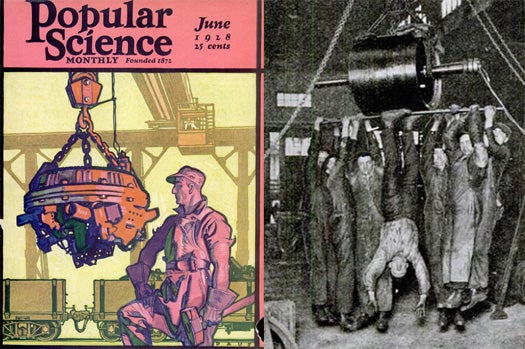 The Myriad Uses of Magnets, June 1928

The lump of metal on the cover of this magazine “rises upward in apparent defiance of gravity.” Though the image is meant to inspire in us some reverence for the awesome power of magnets, lifting piles of scrap is hardly the coolest use of magnetism, even in 1928. Sure, magnets are capable of feats of strength. For example, in the picture on the right, seven men dangling from a steel bar suspended by a magnetic pulley aren’t enough to detach it. But magnets are also suited for more delicate work. As the article points out, magnets are in “virtually everything you use that’s electrical.” And a cobalt steel magnetic pencil that was developed by Dr. R. C. Hartsough of the Chicago Western Electric Co. is perfect for pulling metal splinters out of the wounds of injured workers. Read the full story in Magnets – Strangest Tool of Man. 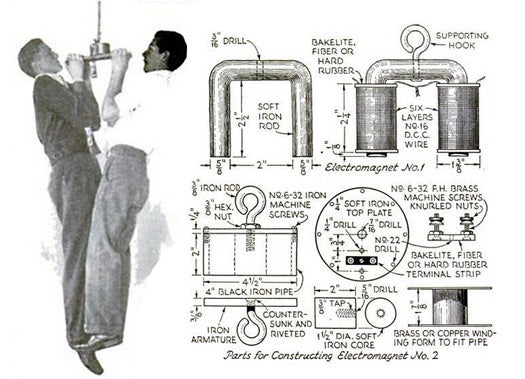 We could huff and puff about the amazing lifting power of magnets until we’re blue in the face, but it wouldn’t be PopSci if we didn’t show you how to do it yourself and elicit “gasps of wonder from the layman.” So, here is a nice party trick to keep in your back pocket: constructing an electromagnet with the power to support the weight of two people using a single flashlight cell. The top magnet is a little easier to make, but it will only support 50 lbs, as opposed to the trickier-to-construct bottom magnet, which will support 250 lbs. Read the full story in Lifting Stunts Performed With Electromagnet and Flash-light Cell. 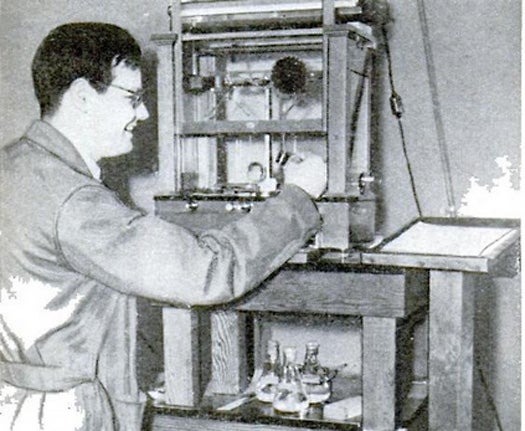 The discovery that blood has magnetic properties allowed Dr. C. D. Coryell at UCLA to study it more closely. Red, oxygenated blood from the arteries is repelled by magnets, whereas “dusky-colored,” unoxygenated blood from veins is attracted. After testing 25 gallons of beef blood, and some of his own blood as well, Dr. Coryell found that blood affected by toxins such as cyanide or carbon monoxide reacted differently to the magnets, leading him to hope that these experiments could lead to new ways of combating poisons. Read the full story in Magnetism Provides New Tests of Blood. 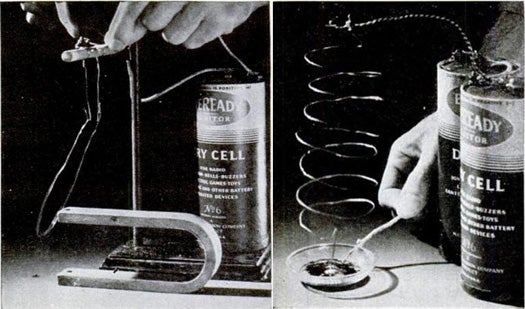 If you have a dry cell and a magnet lying around, and some time to kill, you can get a copper wire to perform acrobatic stunts. Make a loop of wire swing back and forth by connecting each end to one of the leads from a dry cell and place a magnet through the middle of the loop, without touching it. Change the connections back and forth, and the loop will swing in different directions. For a spinning wire coil, connect one end of a loosely coiled copper wire to a terminal on the dry cell. The other end of the wire should be barely touching a dish full of mercury (you, of course, should not touch the mercury at all, considering it’s highly toxic. But we had bigger things to worry about in 1945. Like ending the war.) When you touch a wire connected to the other terminal of the dry cell to the mercury, the coils become magnetized and contract. Then, when the wire loses touch with the mercury, breaking the circuit, it will spread out again, touch the mercury and continue the cycle. Read the full story in Home Experiments With Magnetism.

To make a permanent magnet, you can’t just magnetize a chunk of iron. It doesn’t take. Up until this discovery, magnets were made primarily of tungsten, steel or an alloy of aluminum, copper and nickel. Then, the General Electric Company had the brilliant idea to use iron dust and embed the tiny particles in glass, plastic, rubber or another metal. The magnets that resulted were much stronger, and could be fashioned into fun shapes, like Christmas trees, instead of the boring old horseshoe that everyone was pretty much sick of by that point. Read the full story in Iron Dust Makes Supermagnets. 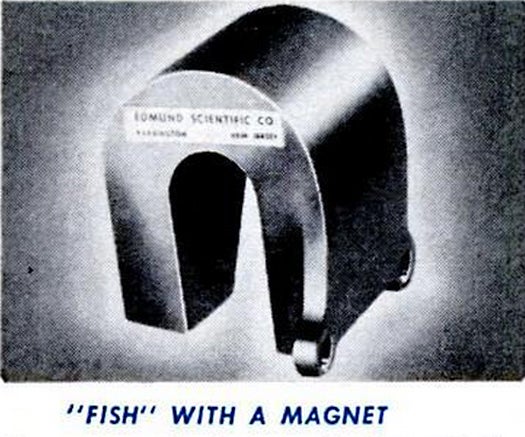 Whatever these magnets were used for in the military, they certainly can’t be pleased to meet such an undignified end: dragged along behind the boat of whoever is willing to pay $12.50 to uncover such treasures as “overboard motors, anchors [and] other metal valuables.” It lifts more than 150 lbs on land, and more in the water. “Fascinating fun, and sometimes profitable!” A recipe for success. See the full ad, and more must-buys in the Mail Order Shopper’s Mart. 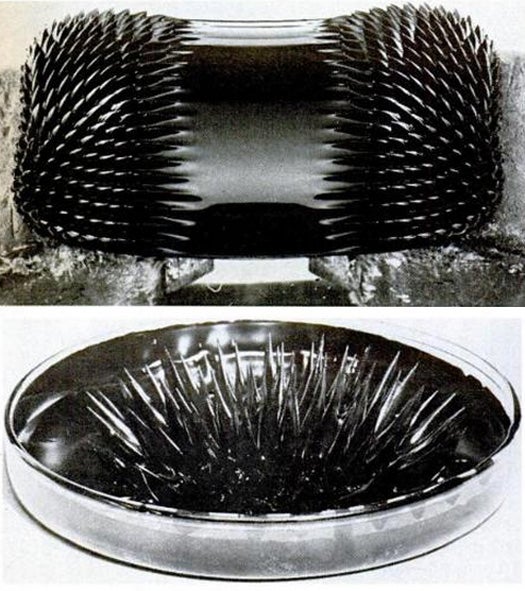 The idea for magnetic ferrofluids came from a problem faced by NASA: “How do you keep weightless rocket fuel from bubbling around in half-empty fuel tanks?” The answer, they found, was to magnetize the fuels, so that they would be pulled to the pumps. These ferrofluids are created by crushing up an iron-oxide powder such as magnetite, and combining it with water, fluorocarbons, silicone or some other liquid, and a stabilizing agent. A magnet can force one of these liquids to climb up a pipe, or force a dense, nonmagnetic metal like uranium to the surface. More practically, using ferrofluids to create seals for bearings makes them vacuum-tight, with no friction. Ferrofluids can also be used to seal aneurysms, “sweep” oil spills into a contained area and make x-rays easier. Or, they can just make cool patterns like these. Read the full story in The Curious World of Magnetic Liquids. 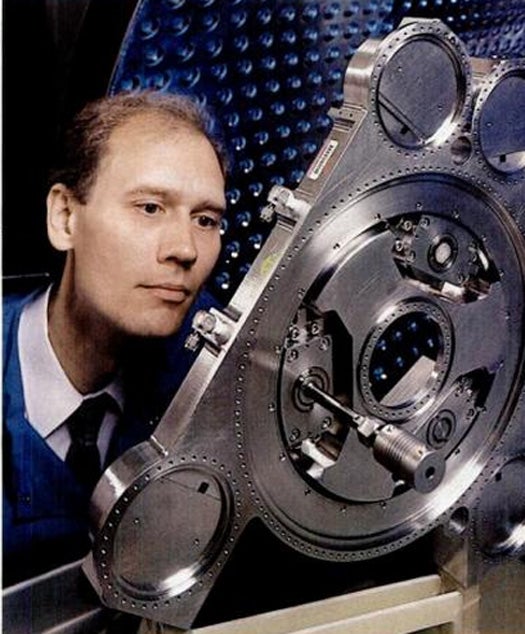 This magnetic refrigerator looks more like something you would find in an episode of Doctor Who than something you’d use to keep your vegetables fresh. Of course, lettuce doesn’t really need to be kept at temperatures as cold as this fridge is capable of. Rather, the refrigerator, developed by Hughes Aircraft Co., is intended to be used to keep electronics cool on spaceships, or to chill medical research equipment and supercomputer parts. A normal fridge works by compressing and expanding gas. Magnetic refrigerators use a crystal called gadolinium gallium garnet, which heats up when magnetized, and cools down when demagnetized. The chilled crystal can absorb a lot more heat than the gas in a normal refrigerator, which allows the magnetic fridge to reach temperatures much closer to absolute zero. Read the full story in Magna Fridge.
galleries
Popsci Archive