The new MakerBot is bigger and more capable than ever before 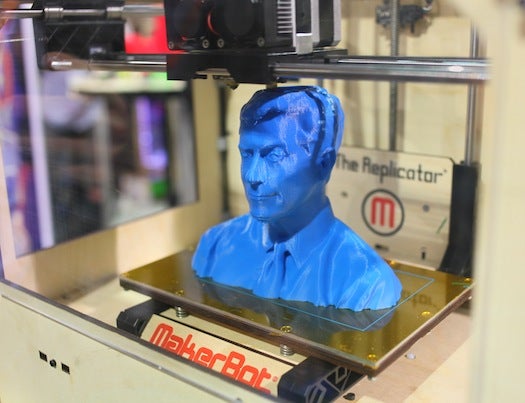 I just stopped by MakerBot’s far-flung booth somewhere in the back caverns of CES (I believe it may technically be in Arizona) to check out their new Replicator 3-D printer. Check out the video below–pretty sure that’s a bust of Stephen Colbert being slowly brought to life with swirling circles of molten plastic.

The Replicator is the newest MakerBot, a relatively inexpensive 3-D printer that can print in either ABS (the same plastic LEGO uses) or PLA (a corn-based bio-material). This version is much bigger, capable of printing objects 9 x 6 x 6 inches in size, and has a “dual extrusion” mode to print two-colored objects, a first for MakerBot. It also ships fully assembled; previous MakerBots required the end user to construct them at home, which is described as being about as difficult to assemble as a piece of furniture from IKEA, so there’s that little inconvenience taken care of.

The new model updates the previous in a few other ways too–it has a built-in LCD panel, a control pad (sort of like a videogame controller), and an SD card slot, so you can just load models onto an SD card and print without needing a computer at all. And as always, plans are available at the MakerBot community.